The Trouble With Hit Points 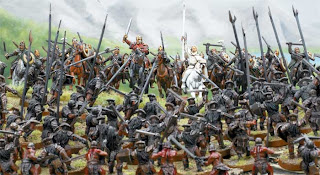 Like many RPGers, I have a love-hate relationship with hit points.
On the one hand, I cut my teeth on D&D, and I think that hit points, along with the original six character stats and character classes (and i'm sure there are others) are essential elements of the "D&D" game.
On the other hand, I have accepted, by never been terribly satisfied with, the mish-mash definition of hit points, being a mixture of physical punishment, endurance, luck, sixth sense, and so on.
I ocassionally play Lord Of The Rings: Strategy Battle Game. While this is no RPG, it is an interesting "rules-light" tabletop wargame. Each of your units is an individual warrior. Typically, a warrior has only one "wound": you hit him, he's dead. All of the weapons do one damage, regardless of weapon type. A hand weapon is a hand weapon, whether it is a sword, a mace, or an axe.
Where LOTR:SBG gets interesting is with the "heroes" of the game. While rank and file warriors have one wound, heroes also have "fate" points. A hero with one or more fate points can use a fate point to avoid taking a wound, as a result of a successful attack. While a hero can only have a maximum of three wounds, there is no maximum number of fate points a hero can have.
I find this approach attractive, as it seems more "true" to the idea of heroes, by recognizing that a hero can anticipate a blow and thus avoid it at the last second (by using a fate point) or that the gods themselves protect the hero, as it is not his "fate" to fall in this battle. Whether you could apply this approach to D&D is another matter, but it would be interesting to try.
Posted by Aaron E. Steele at 6:05 AM

It can be a tough sell to old gamers, though.

Perhaps. You could say your "original" hit points (wounds) are "true damage" and the additional hit points after first level (fate) are "fatigue, skill, luck" and so on. This requires you to track two "buckets" of hit points, which can be confusing.

On the other hand, if you use fate separately from wounds, why would you not be able to recover those fate points, faster than the wounds?

I agree, replacing hit points with wounds and fate would be, at a minimum, unorthodox. But as I mentioned at the start of the post, I've never been entirely satisfied with the hit point mechanic anyway!