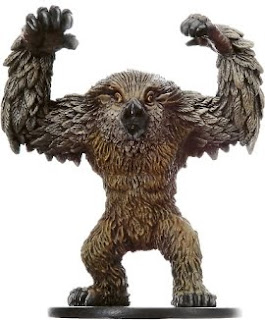 From the Original Dungeons and Dragons Supplement: Greyhawk, 1976.
"OWL BEARS: Creatures of horrid visage and disposition, Owl Bears will attack whatever they see and fight to the death. They deliver a hug, just as a Werebear, for example, as well as great damage from beak, tooth and claw."
This pleasant fellow appears in the old-school adventure B2, Keep On The Borderlands, and is a particularly ferocious opponent.
This WOTC sculpt is particularly nice. I have seen other non-WOTC versions which also do this beast justice.
Posted by Aaron E. Steele at 8:12 PM

Awww...lookie...how cute. Arms open wide for a hug. Who doesn't love the owlbear?

I remember meeting this fellow in B2. At the time, he was pretty scary (I was 12?) as the DM acted him out, complete with horrible screeching and flapping of arms.