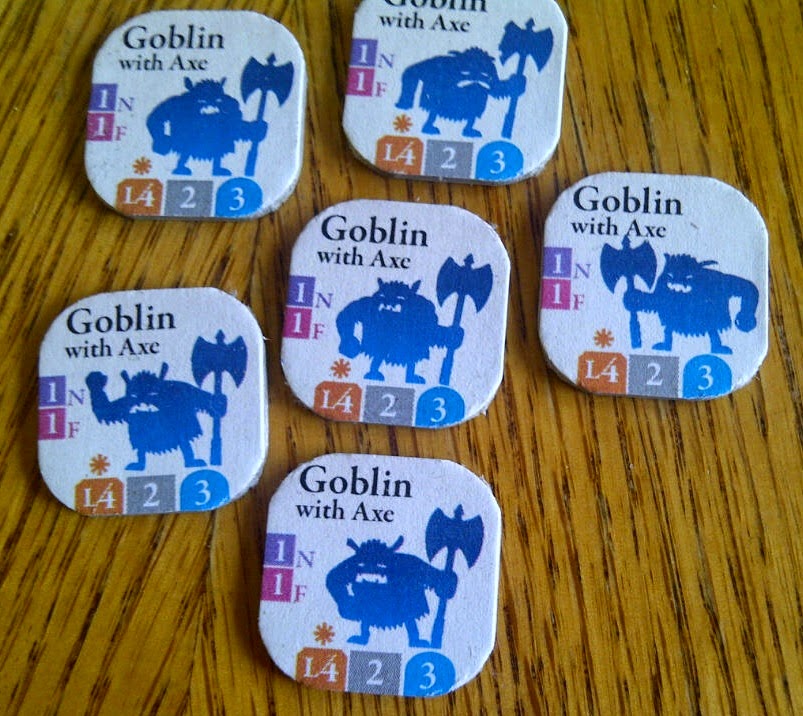 I have quite a few unfinished projects.  Among those is my Magic Realm reprint project.  On the weekend, I finally decided to tackle the production of the monster counters for the "Karim" Magic Realm reprint, and discovered that most of the Axe Goblins are left-handed!  Each of the six axe-wielding Goblins have unique poses, which is not true for many of the other large groups of monsters. 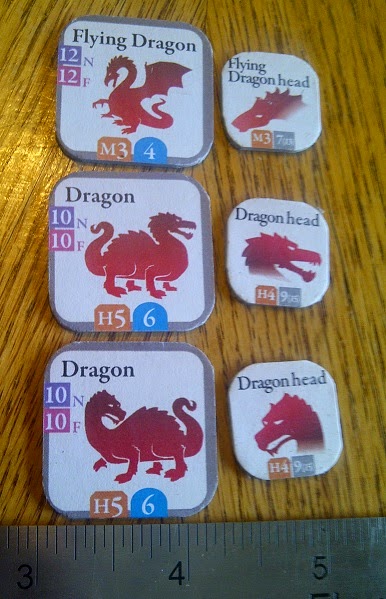 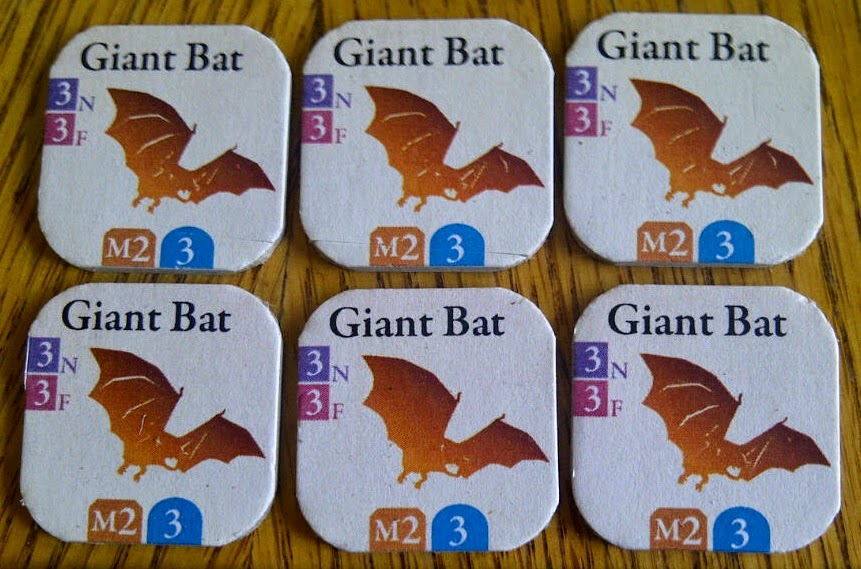 Each of the six Giant Bats are identical.  I would have liked it if the designer had given each Giant Bat a monster number, but I can add those to the counters myself. 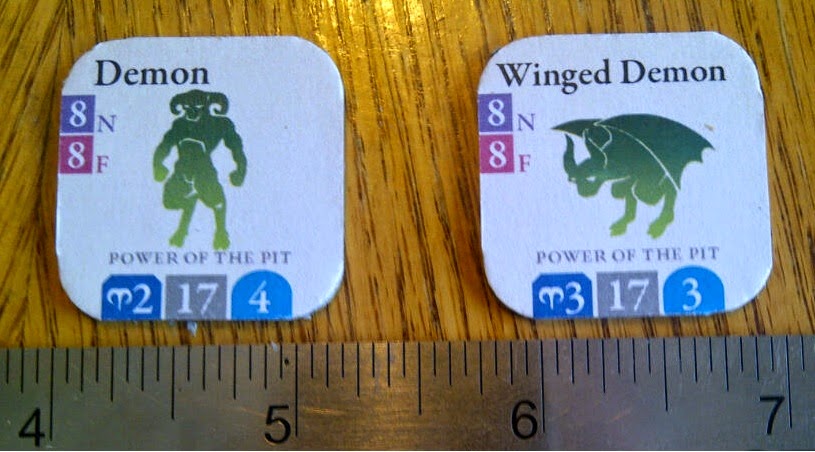 Here are the two Tremendous Demons.  They both look pretty formidable! 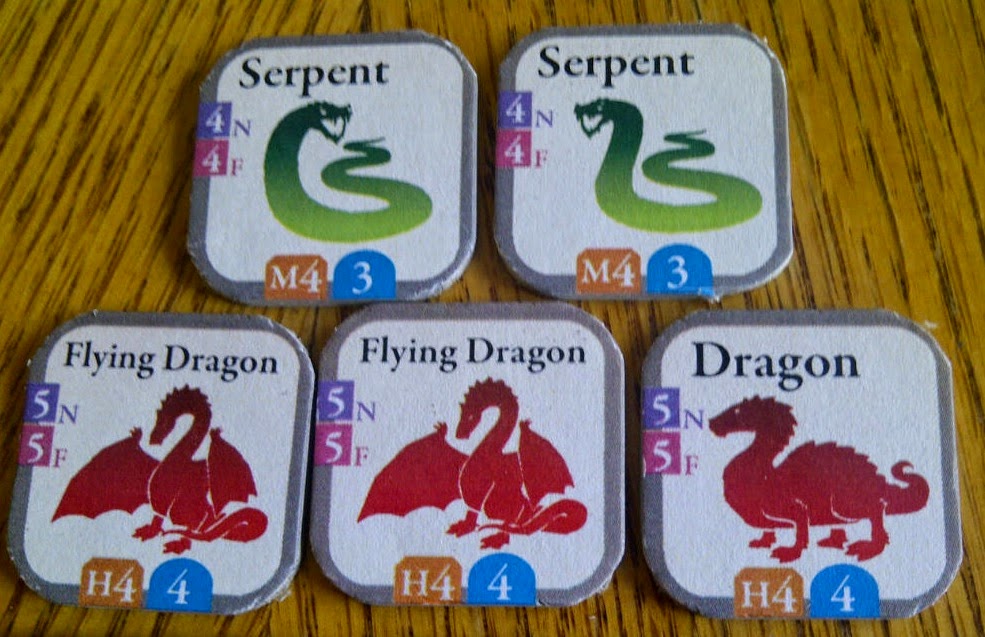 The above are a pair of Heavy Serpents, and three Heavy Dragons.  The original Magic Realm counters used a different color coding, whereas the Karim redesign uses the same colors for the monsters in each appearance chart row.  I think I prefer the original color coding, but the art design of these Karim monsters are generally better. 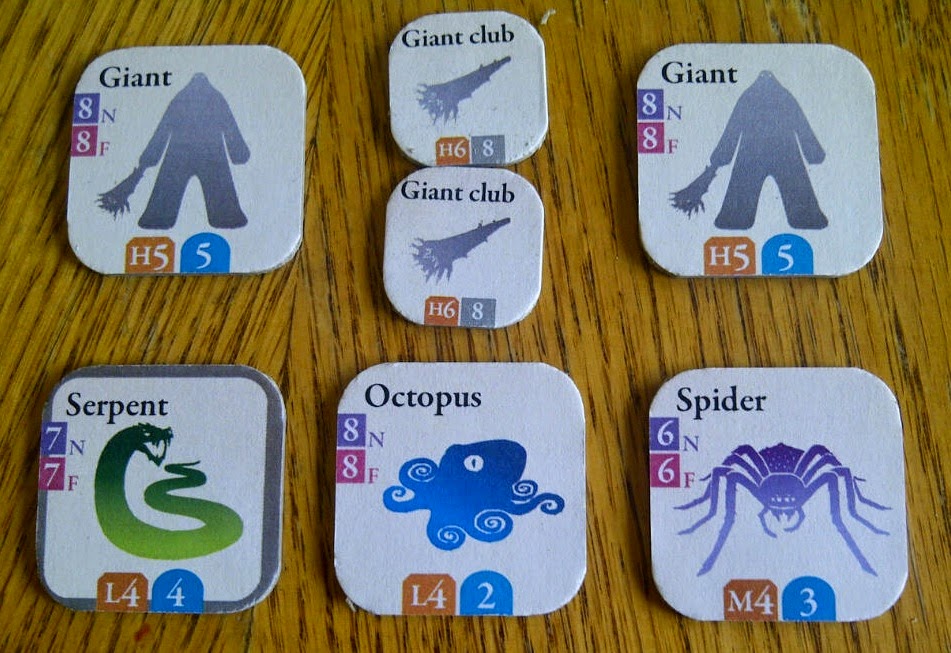 The new Magic Realm Giants and Trolls are less interesting artistically than the old ones, but they certainly fit with the rest of the redesign art. 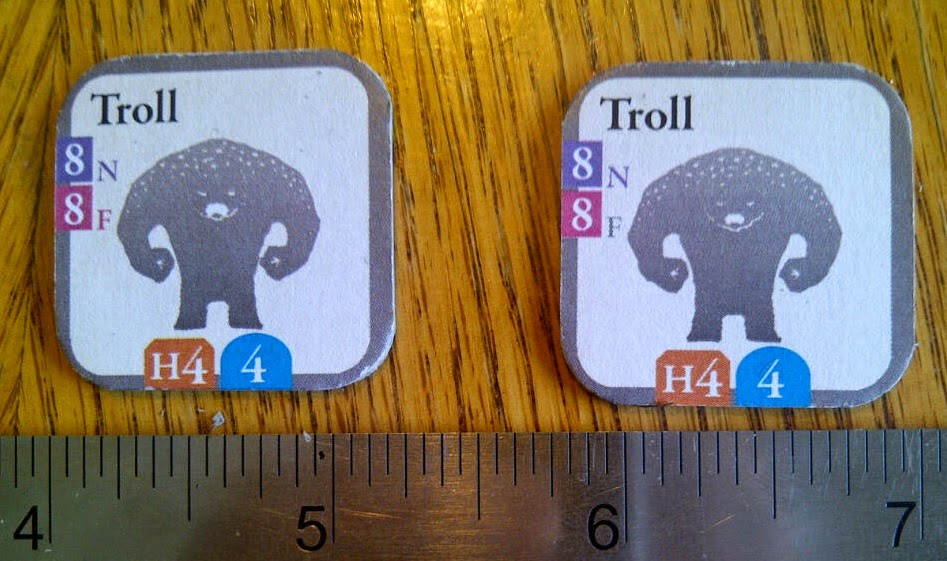 And finally, here are the six wolves that appear in the Magic Realm redesign.  They seem more vicious than their cousins from the original Magic Realm game. 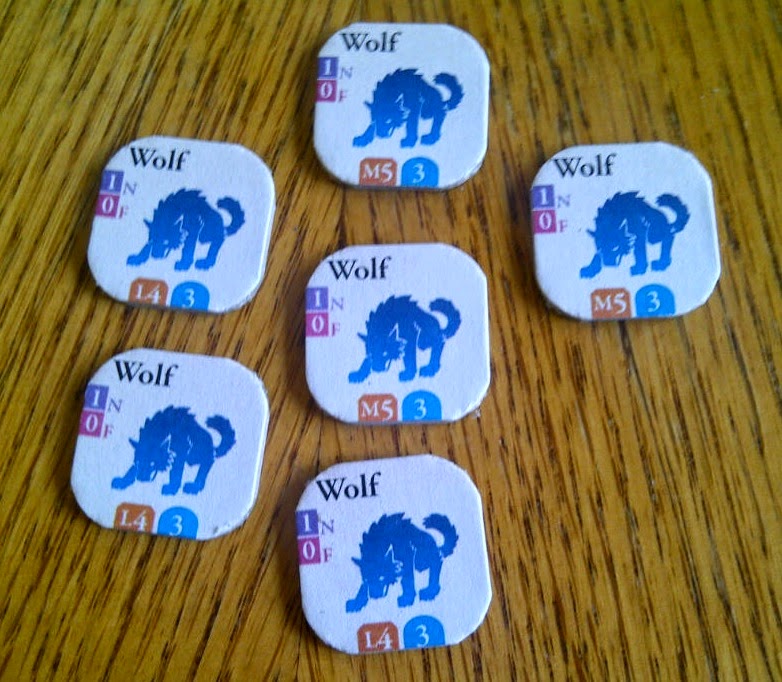 The above was a sampling of the monsters in Magic Realm.  There are more monster counters that I produced, but did not take photos of.
Posted by Aaron E. Steele at 1:22 PM 3 comments:

Here is the current status of your characters.  If there are any scenarios that you have not completed, I am happy to organize a session to allow you to complete it and obtain the related reward.  That is particularly relevant in the case of any unplayed Brine Dragon and Lone Shark scenarios, since those provide coveted skill and power feat upgrades.  I can be contacted via my Paladin email if a Christmas break PACG game is desired.

While I help organize the Pathfinder Adventure Card Game sessions in St. Albert, there is another PACG organizer, Jason, who takes care of the Edmonton sessions.

He and I both have inserts for the Pathfinder Base Set. He is using the insert from Broken Token (seen below), which has 4 complete rows for cards, and a fifth, smaller row, for dice, pencils and other paraphernalia. 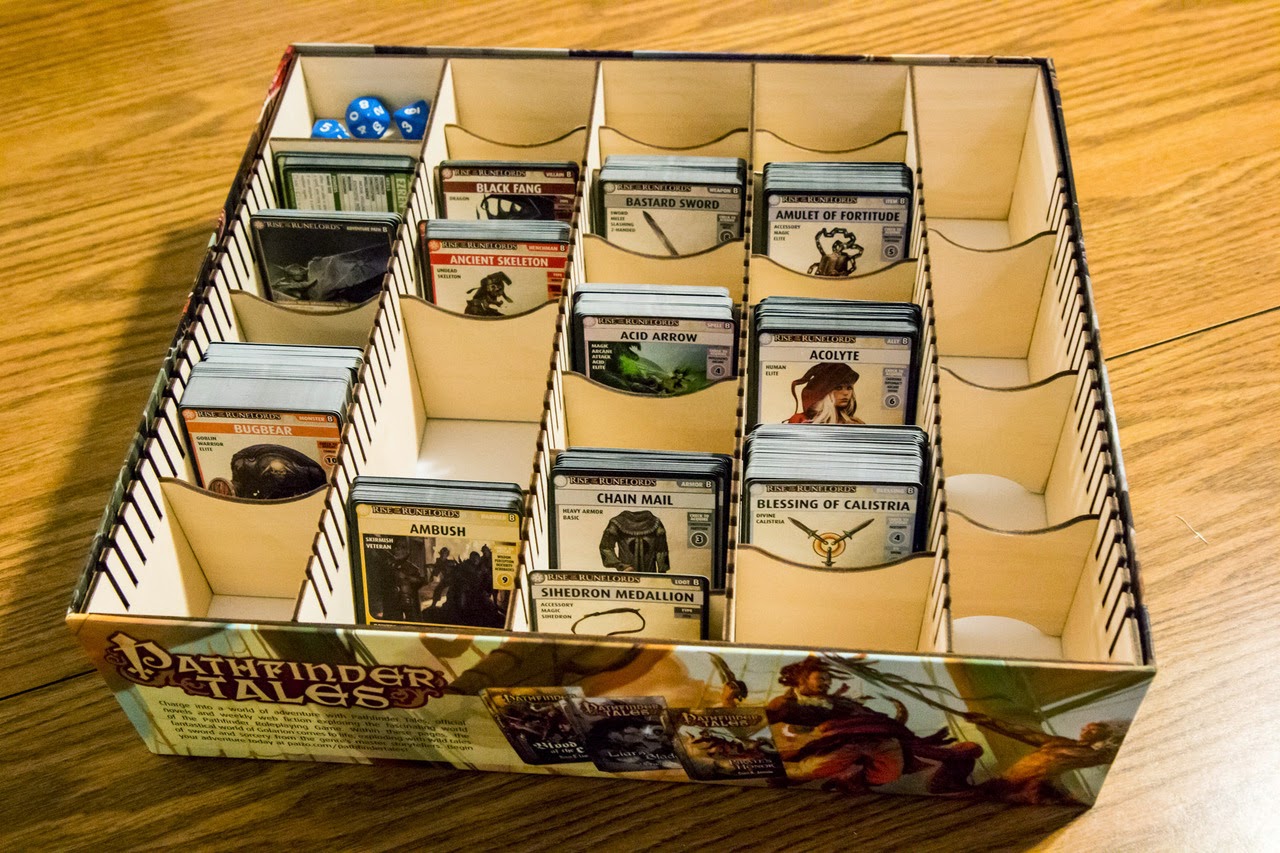 My Base Set contains the Go7 Gaming insert, which has 5 complete card rows, and also uses clear acrylic dividers rather than the wooden dividers included with the Broken Token box insert.

While I prefer the Go7 Gaming insert, it is slightly more expensive, at $31, compared to the cheaper Broken Token insert that sets you back $27. 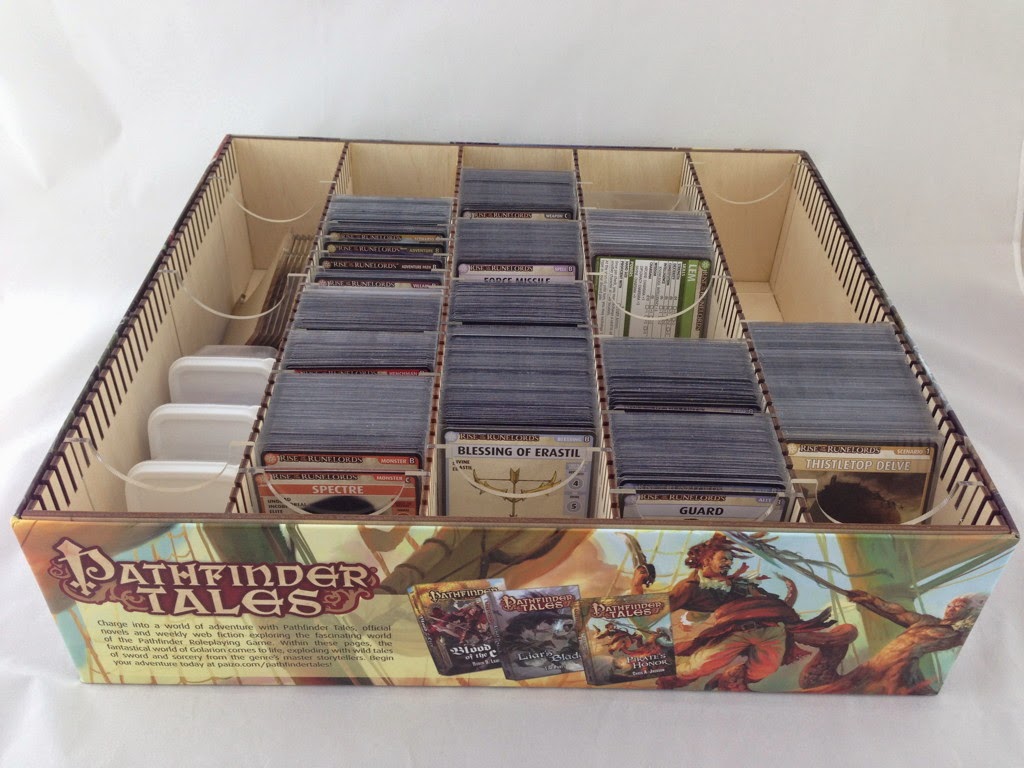 I appreciate the design of the Go7 insert, having 5 full rows, which allows me to store additional cards, including the new class decks.
Posted by Aaron E. Steele at 3:59 PM 1 comment: