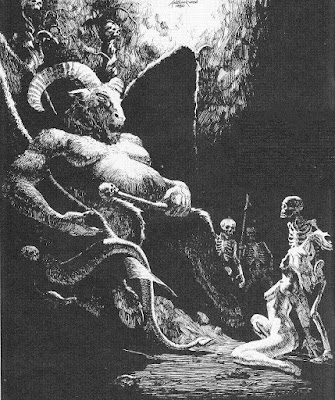 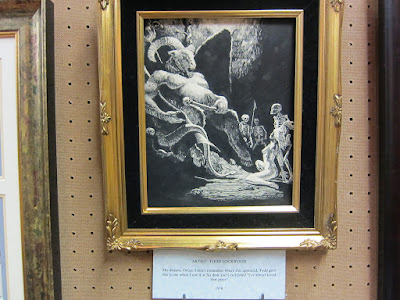 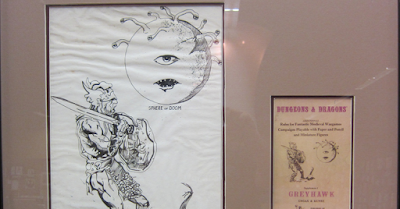 I've since been in contact with Todd Lockwood, and he confirms that David "Diesel" LaForce, an illustrator and cartographer for TSR, has the original Orcus illustration.  He gave LaForce the illustration in 1997 when they were cleaning out the archives at TSR, during its sale to Wizards of the Coast.
Posted by Aaron E. Steele at 9:44 AM 8 comments:

But Is It A Roleplaying Game? 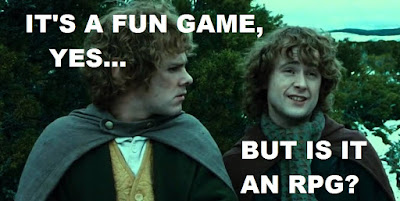 I feel no shame in admitting that for the last three years, my free time has been largely filled with the Pathfinder Adventure Card Game ("Pathfinder").  The remaining hours have been spent playing various board games with family and friends.  I have yet to participate in a paper & pencil roleplaying game since moving to St. Albert.

Pathfinder has filled the space normally reserved for roleplaying games.  I play with two groups, one on Wednesdays and the other on Sundays.  One of things I enjoy about the game is that we can complete a five-to-six player Pathfinder adventure in under two hours.

With Pathfinder, no on acts as Dungeonmaster.  After someone reads, aloud, a two-minute scenario outline, we collectively build the adventure locations in under 10 minutes.  From there, the game essentially runs itself.

I've been writing about card-based roleplaying games on this blog for the last six years.  One of the earliest card-based games I became interested in was Dungeoneer, a competitive fantasy adventure game from 2003. 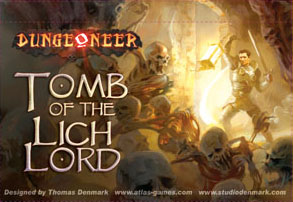 Designed and illustrated by Thomas Denmark, each player competed to be the first to finish three quests.  Atlas Games released at least 8 different Dungeoneer adventure decks, but no new content has been published since 2007.  Would I love to see this game resurrected as a cooperative game with new content?  You bet.  If you can still find Dungeoneer in your FLGS, I recommend buying a large 110-card pack and giving Dungeoneer a try.

Pathfinder, by contrast, is a cooperative game, and was first published in 2012.  Although other card-driven fantasy games have since been released, Pathfinder still comes closest to what I imagined a card-driven cooperative RPG would look like.

Of the many advantages of a card-based fantasy adventure game, one of the chief-est is a similar decksize for all characters. Pathfinder starts with a decksize of 15 cards for each character.  That permits characters to be balanced against each other,creating a mechanical way of allowing everyone their moment in the spotlight.

But is Pathfinder a roleplaying game?

I don't take credit for the following definition of a roleplaying game (and you may disagree with it) but here are some characteristics they all seem to have in common:

(1) Freedom: Players have absolute freedom to pursue any activity or attempt any action within the confines of the game world.  That does not mean the pursuit or action will be successful: it just means the player can choose it, and the referee, with or without the participation of the Players, will adjudicate the results.

(3) Purpose: the referee and the players determine the purpose of the game, what has brought them together, why are they participating, what goals are they pursuing.

(4) Consequence: there must be some consequence to the results of the players actions.  Perhaps the consequence is simply the gaining of experience, levels,wealth or social standing within the game world.  Perhaps it is an emotional catharsis, or a deeper appreciation for the plight of people inhabiting that imaginary world.  Perhaps failure comes with an game-world cost.

Given the definition above, I doubt that Pathfinder would qualify as a roleplaying game:

(1) Freedom: Pathfinder players do not have total freedom to do what they want within the game world.  The Player cannot send their character to the town square, if that location is not part of the scenario.  The Player cannot try to negotiate with a monster, as the only action the monster card allows is combat.

(2) Immersion: Pathfinder provides predefined, iconic characters for game use.  Other than in specified ways, I cannot develop my character as I see fit.  I direct the character, but I don't become the character.

(3) Purpose: the purpose of the Pathfinder scenarios are pre-defined.  There is no room for the players, individually or collectively to define the purpose to the game, other than what the game has already prescribed. Every adventure completed will lead, inexorably, to the final, pre-determined adventure.

(4) Consequence: there are few consequences, other than those imposed on the final scenarios, to success or failure.  Characters can die, and will restart the next game with a completely fresh deck of cards, but in general, failure to complete a scenario simply results in having to play the scenario again, until success is achieved.  Failure does not have any upstream impact on future scenarios.

I like Pathfinder.  A lot.  For people who are looking for a fantasy adventure game, I can think of few I would recommend more highly.  But if you require your gaming experience to be fully rpg-like, you will probably be disappointed with Pathfinder.
Posted by Aaron E. Steele at 11:13 PM 4 comments: 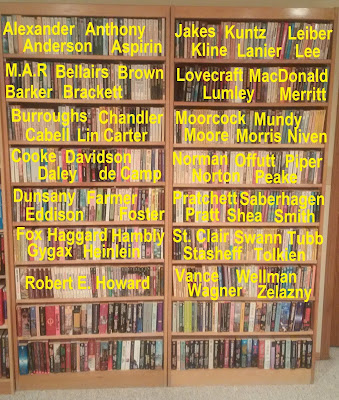 I've been looking for some decent bookcases for about four years.

I finally came across the bookcases, above, which a used bookstore were getting rid of.  Because they were custom-built for that bookstore, they are of quality plywood construction, with moveable shelves, allowing me to efficiently house my Appendix N collection.

The above photo is my complete Appendix N collection, minus the books below, which I just picked up at another used bookstore yesterday. 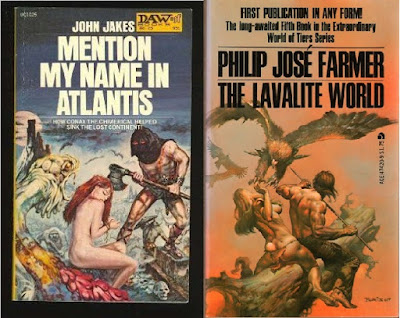 John Jakes' Mention My Name In Atlantis and Farmer's The Lavalite World. 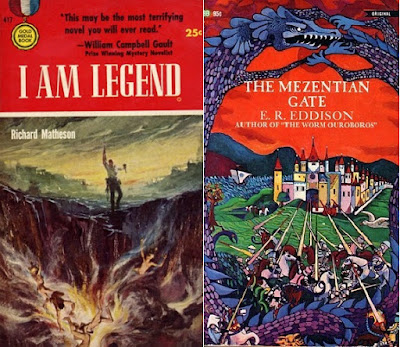 I Am Legend by Richard Matheson and The Mezentian Gate by E.R. Eddison. 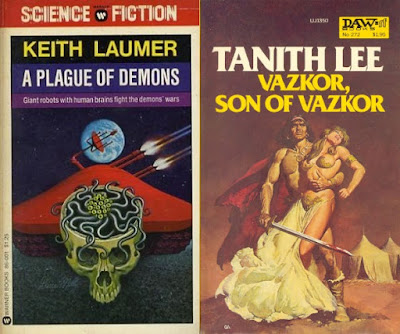 Finally, Keith Laumer's A Plague Of Demons and Zazkor, Son Of Vazkor by Tanith Lee.
Posted by Aaron E. Steele at 8:27 PM 3 comments: 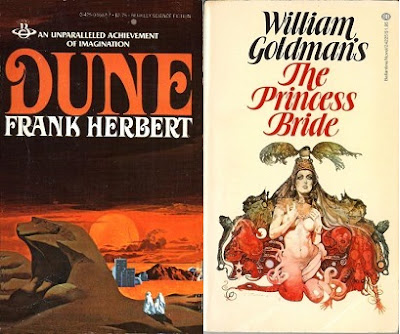 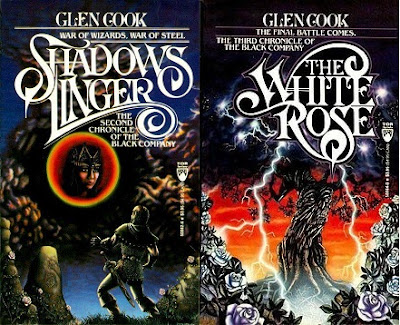 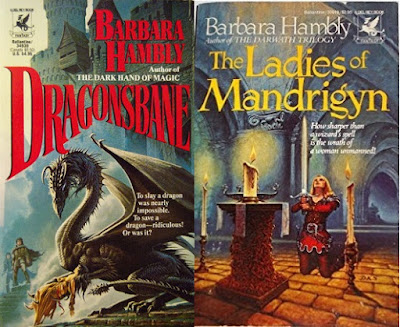 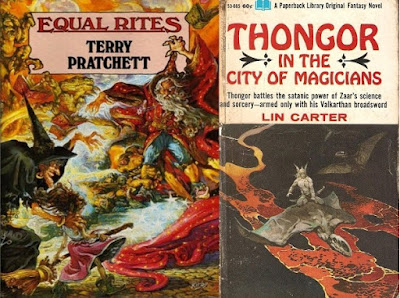 Once again updating my Appendix N list with some recent additions, including: Frank Herbert's Dune; The Princess Bride by William Goldman; a pair by Glen Cook (Shadows Linger and The White Rose); Barbara Hambly's Dragonsbane and The Ladies of Mandrigyn; Equal Rites by Terry Pratchett; and Lin Carter's Thongor in the City of Magicians.

Zelazny, Roger: Nine Princes In Amber; The Guns of Avalon; Sign of the Unicorn; The Hand of Oberon; The Courts of Chaos; Jack Of Shadows; Dilvish, The Damned; The Changing Land; Isle of the Dead; Trumps of Doom; Blood Of Amber; Sign Of Chaos; Knight Of Shadows;Prince of Chaos, The Chronicles Of Amber 1
Posted by Aaron E. Steele at 11:09 AM 1 comment: