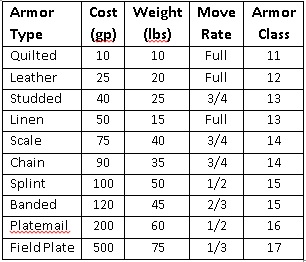 Rather than including shields as part of a character's Armor Class, they can be used to deflect a number of successful attacks, depending on the size of the shield.  The table, above, provides the various types of armor available in the game.  When an attacker makes a successful attack, the defender can attempt to use his shield to deflect the blow.  There is a 50% chance that a shield deflection attempt will be successful.

Changing shields to work, as described above, makes the shield a much more powerful addition to a character's equipment.
Posted by Aaron E. Steele at 4:33 PM 9 comments: