Ghosts Of The Deep 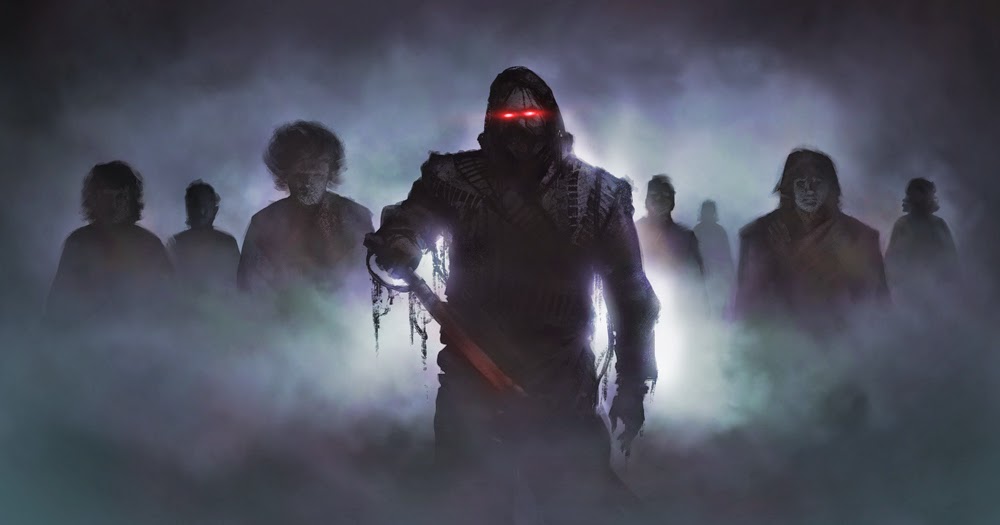 Haunted by Ghosts of the Deep!

Join us at 1 pm on Sunday, November 2, 2014 for a nightmarish session of the Pathfinder Adventure Card Game, Skull & Shackles Organized Play program.

All existing participants are new to the PACG system, so no experience is necessary and newcomers are welcome.

The game session begins at 1 pm and ends at 3 pm: games are no longer than two hours.

Game Rules can be downloaded for free from the Paizo website, but PACG is a cooperative game so you can also learn as you play. 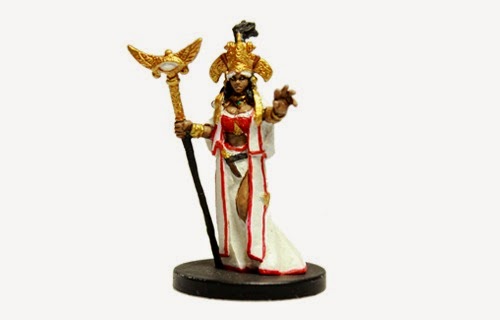 The next set of Paizo pre-painted Pathfinder miniatures, designated The Lost Coast, are being released in November 2014.

I don't expect I will purchase an entire case, as I have done in the past, as the number of unique figures in each case recently dropped from 55 to 45, but there are several figures in this set that are sufficiently useful and well designed that I intend to buy them individually.

Alahazra, above, is one of my favorite iconic characters, and despite another, perhaps superior Alahazra sculpt being released in early 2015, is on my list of Lost Coast Gems. 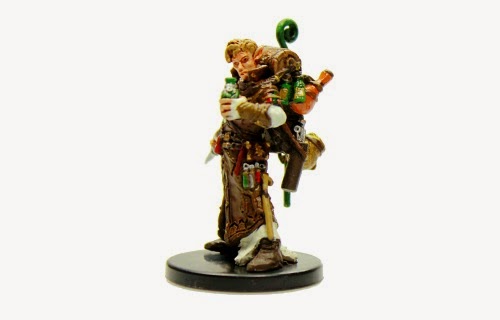 Damiel is the other iconic character that makes an appearance in The Lost Coast pre-painted miniatures set.  I think I would have preferred Jirelle over Damiel, but this character is still worth having a miniature for.

Several archers are included in this miniatures set, like the City Watch Sniper, the Forest Shadow, and the Elf Archer (all three displayed below).  These are decent sculpts and can stand in for player characters. 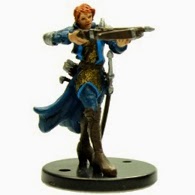 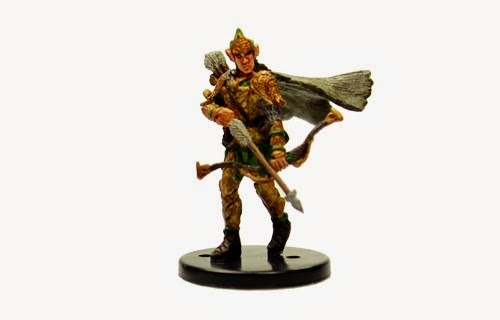 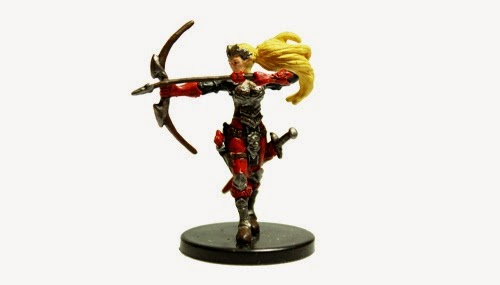 Several worthy Giant sculpts make an appearance in this miniatures set, included a Stone Giant (Conna the Wise), the Fire Giant King, and an Ogre (Malugus Kreeg).  The renditions of giants in Pathfinder have started to grow on me, although I still loathe the Pathfinder versions of trolls. 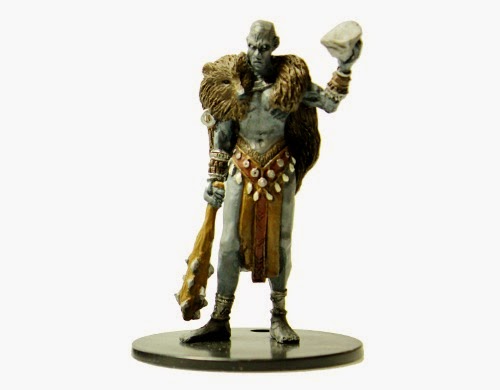 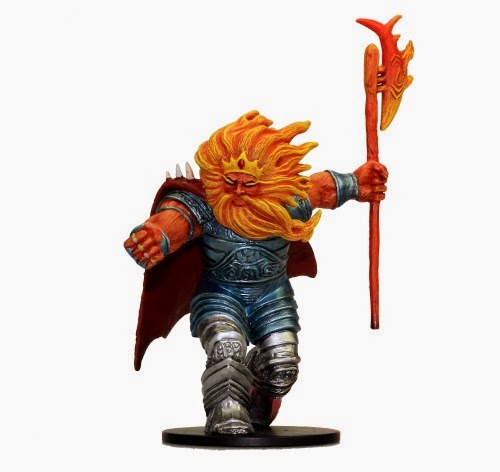 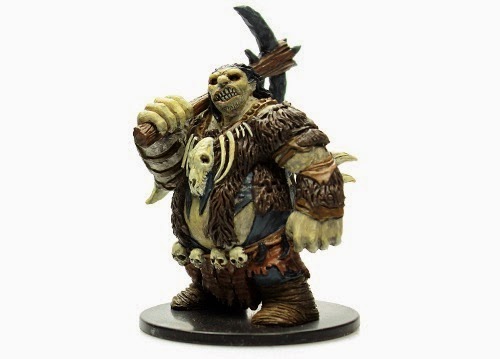 The last three miniatures to be featured in this post are Pazuzu, Lamashtu and the Mother Of Monsters, three creatures presumably unique to the Pathfinder universe, but interesting enough that I will be including them in my individual Pathfinder pre-painted miniatures purchase. 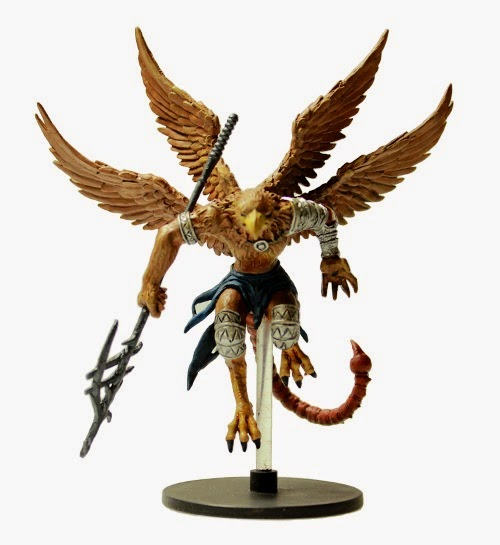 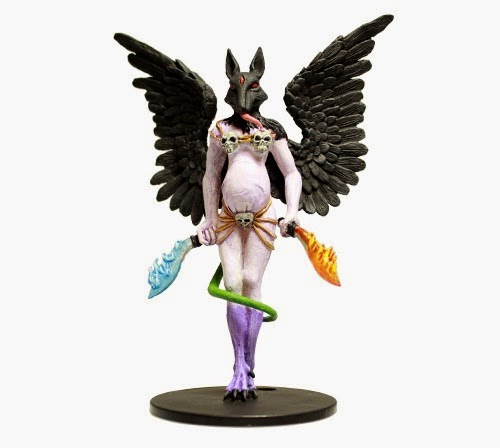 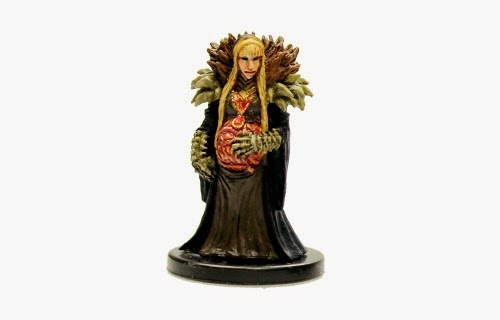 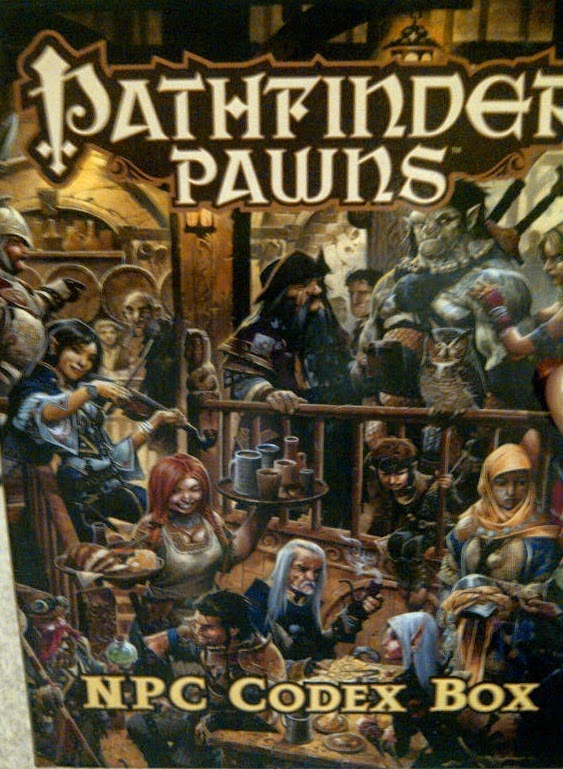 Even though I'm heavily invested in the Pathfinder miniatures, having purchased every complete set except the most recent, I still found it worthwhile to pick up the Pathfinder Pawns NPC Codex Box.  The cost per cardboard pawn is roughly 10 cents, which compares quite favourably to the $3-4 per miniature.

Truth be told, there are several cardboard pawns in the NPC Codex Box with artwork matching the characters in the new Pathfinder ACG Character Decks, and I wanted to have pawns available to represent those characters, rather than using the included playing-card tokens that otherwise are placed at PACG adventure locations to indicate which location a character is visiting.

Most of the artwork on the pawns in the NPC Codex Box is acceptable or better, but there are several pawns that include artwork that is smaller than it should be.  Rather than complain about the undersized art to Paizo on their website [an arguably futile endeavour], I printed slightly larger character artwork and produced my own replacement pawns.  Here are several of those original pawns, with their replacements. 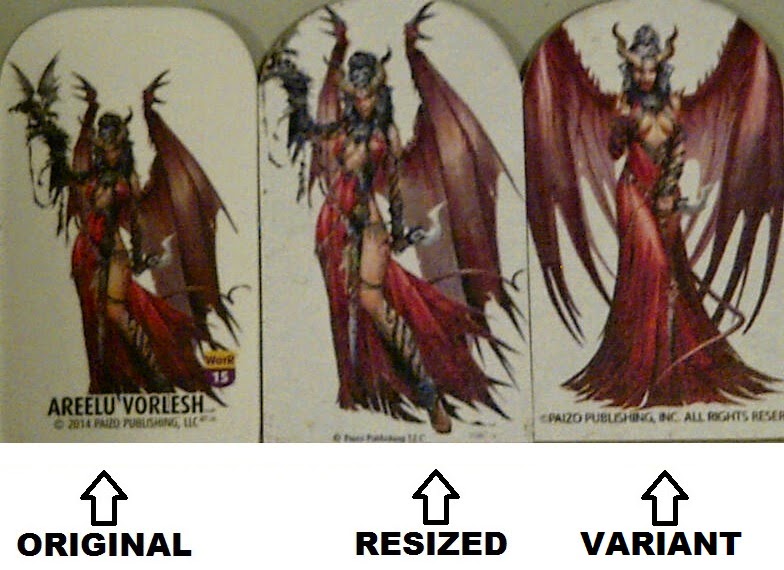 The Areelu Vorlesh pawn [from Wrath Of The Righteous] was an especially egregious example of undersized art [please excuse the blurriness of the photos, the art on the original pawns and the replacements is actually crisper than the photo suggests].  My replacement pawns for Areelu cut off the mini-dragon and wing-tips respectively, but I don't think you need the entire image on the pawns. 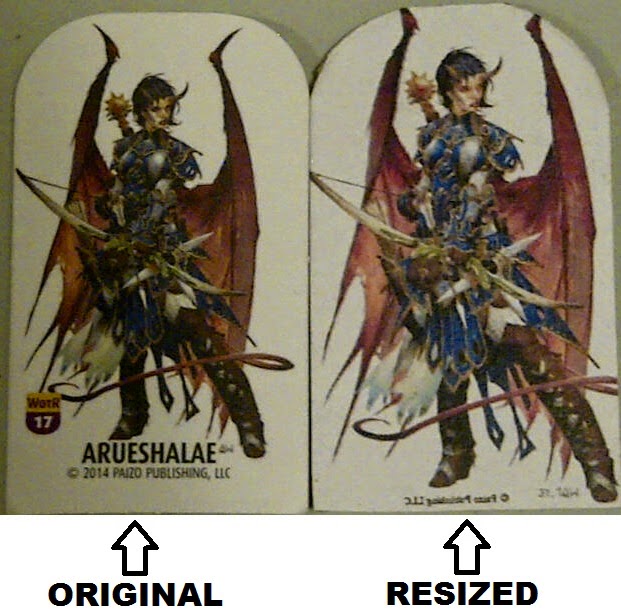 Arueshalae [another pawn from Wrath of the Righteous] was also slightly undersized, so I increased the artwork by a couple of millimeters and produced a new pawn for her.  I suppose I could have adjusted the artwork so she was "higher" on the pawn, but I am, nonetheless, relatively happy with the way this replacement pawn turned out.

While I was printing out replacement pawns for those pawns that Paizo undersized, I created several pawns for the characters included in the Skull and Shackles Base Set and Character Add-On Deck.  It would have been nice if Paizo had better coordinated the release of PACG adventures and the related, prepainted miniature and cardboard pawn.  For example, they produced a prepainted miniature for Lirianne the Gunslinger, 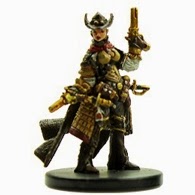 but not one for Jirelle the Swashbuckler [the custom-made cardboard pawn in the center, below]. 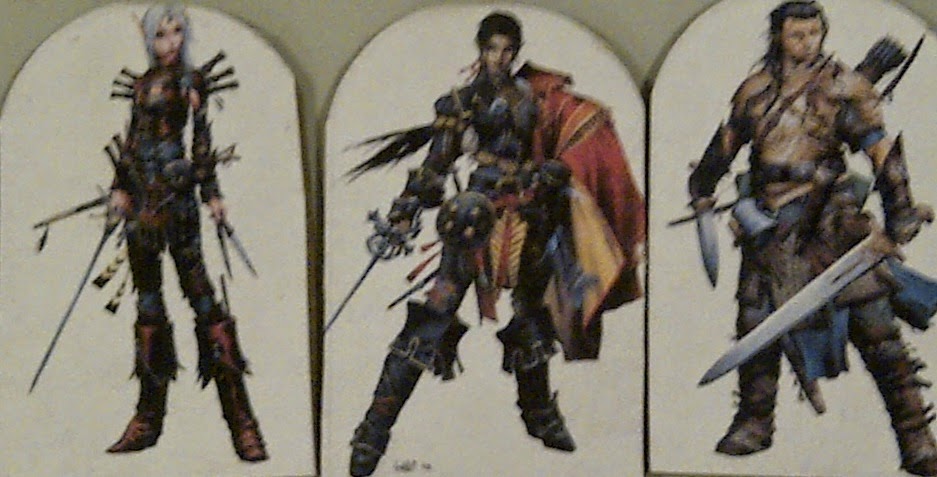 Until a miniature for Jirelle is made available, I can use my custom-made pawn, above, in lieu of the playing-card token included in the PACG Skull and Shackles Base Set. 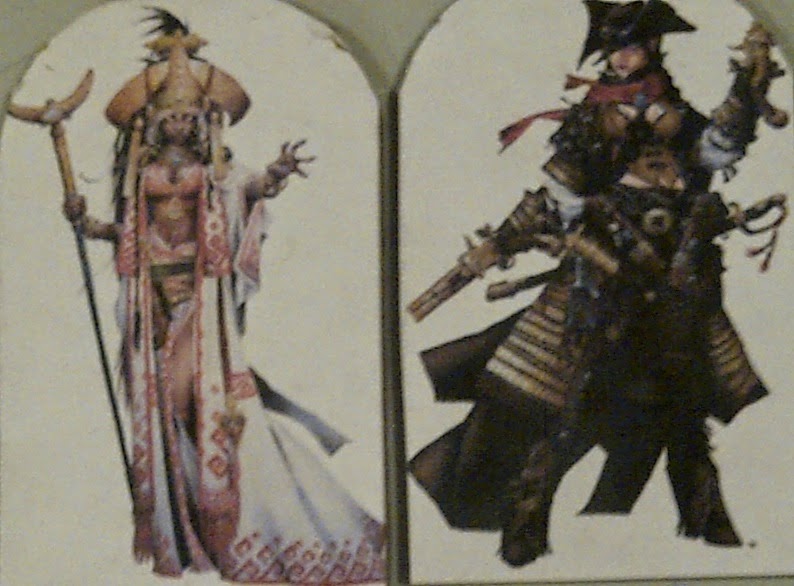 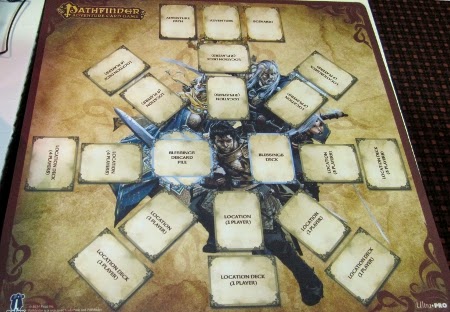 We played our first session of the Pathfinder Adventure Card Game on Sunday, October 19, 2014, using the "official" location mat (seen above).  Joanna, Trevor, Travis, Brad, Mark and I ran through the introductory adventure "On The Horizon", in which you must defeat several enemy ships, investigate other sunken ships, and finally negotiate with the Pirate Council.

We ultimately failed our mission, but it was on account of running out of time, our strategies were otherwise relatively sound.

We'll give the adventure another try on Sunday, October 26.  Additional participants are welcome (a second base set is available, so we have room for plenty more players).
Posted by Aaron E. Steele at 4:57 PM No comments: 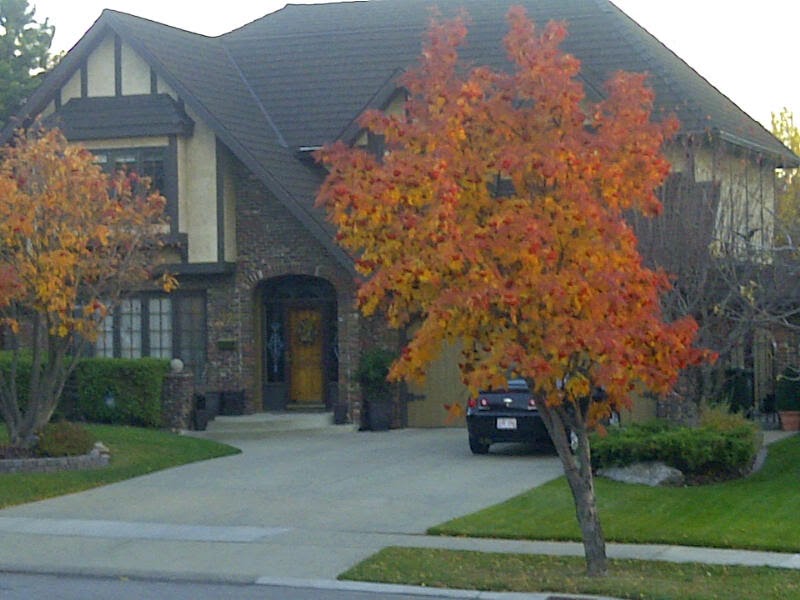 This is what Autumn looks like on my street.  We celebrated Canadian Thanksgiving on the weekend, and took a break from cooking our turkey and preparing the rest of the fixings to take a set of photos of the Fall colors.  The photo, above, is the trees across the street from our house.  The photo below is of the trees on our side of the street. 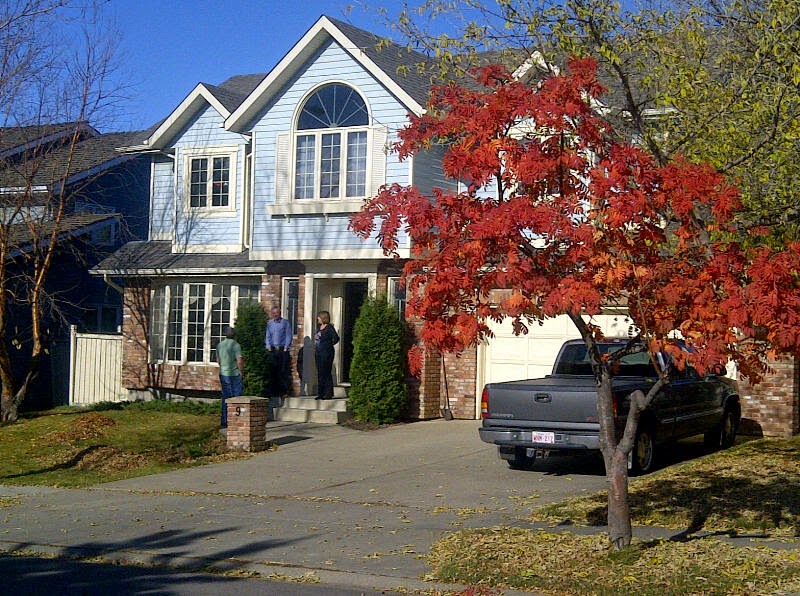 The photo below, from in front of a neighbor's house, is something (apparently) called a "Burning Bush", which changes from green to a bright cherry red in the Fall. 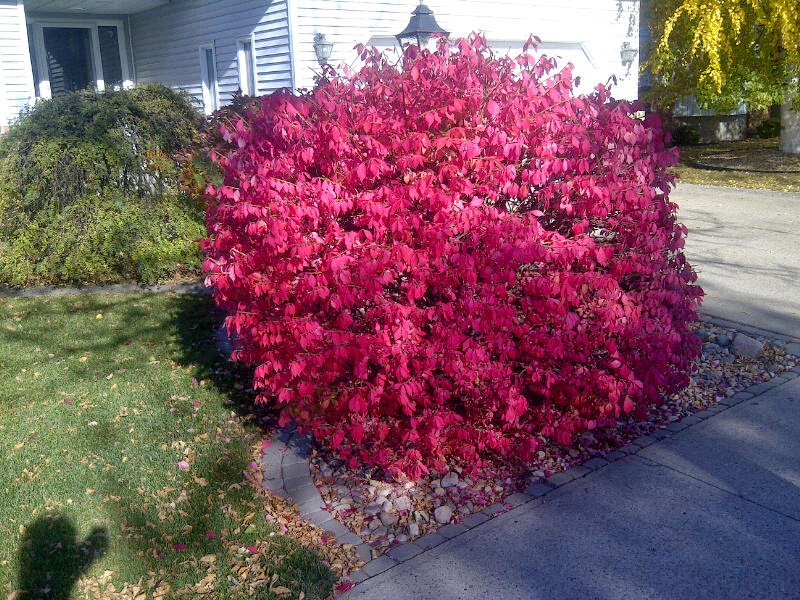 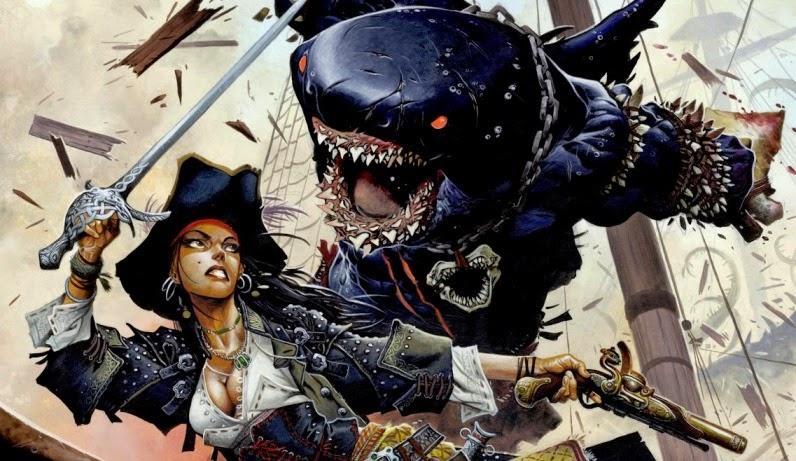 I will be running the inaugural session of the St. Albert Mission Pathfinder Adventure Card Game ("PACG") Organized Play program on Sunday, October 19, 2014, at Mission Fun And Games in St. Albert, Alberta. 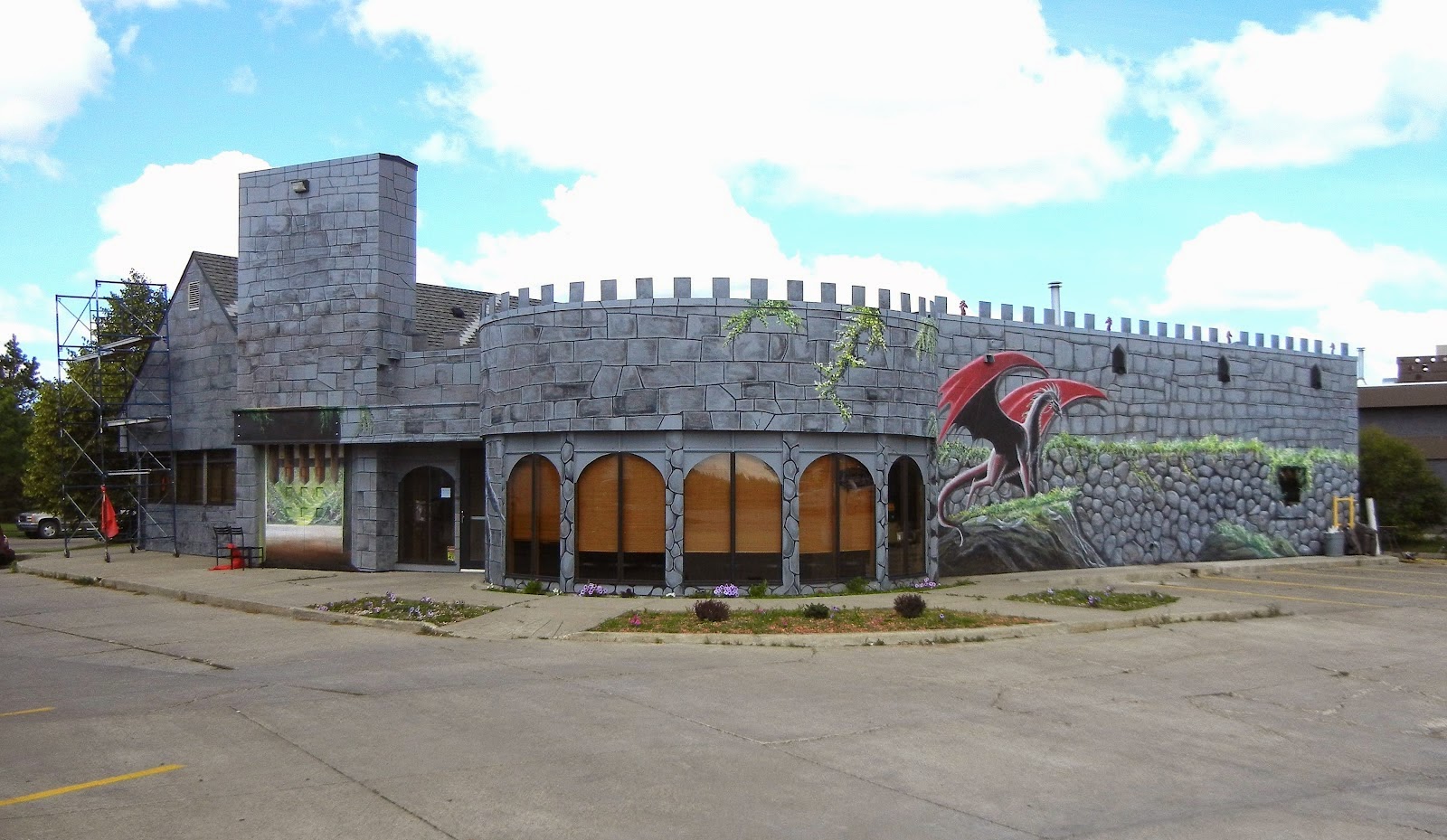 Participants will partake in the introductory session of Skull And Shackles PACG Season 0, as their characters cooperate to jointly face the villains and monsters of the Pathfinder universe's pirate-infested seas.  And after all, who doesn't like battling were-sharks while brandishing cutlasses and pistols?

Game sessions are no more than 2 hours long.

The first adventure, "On The Horizon", will commence thereafter at 1:00 pm and will end no later than 3:00 pm.

Participants will benefit from reading both the Skull And Shackles Adventure Card Game rules and the Organized Play rules (both available as free downloads from the Paizo website). 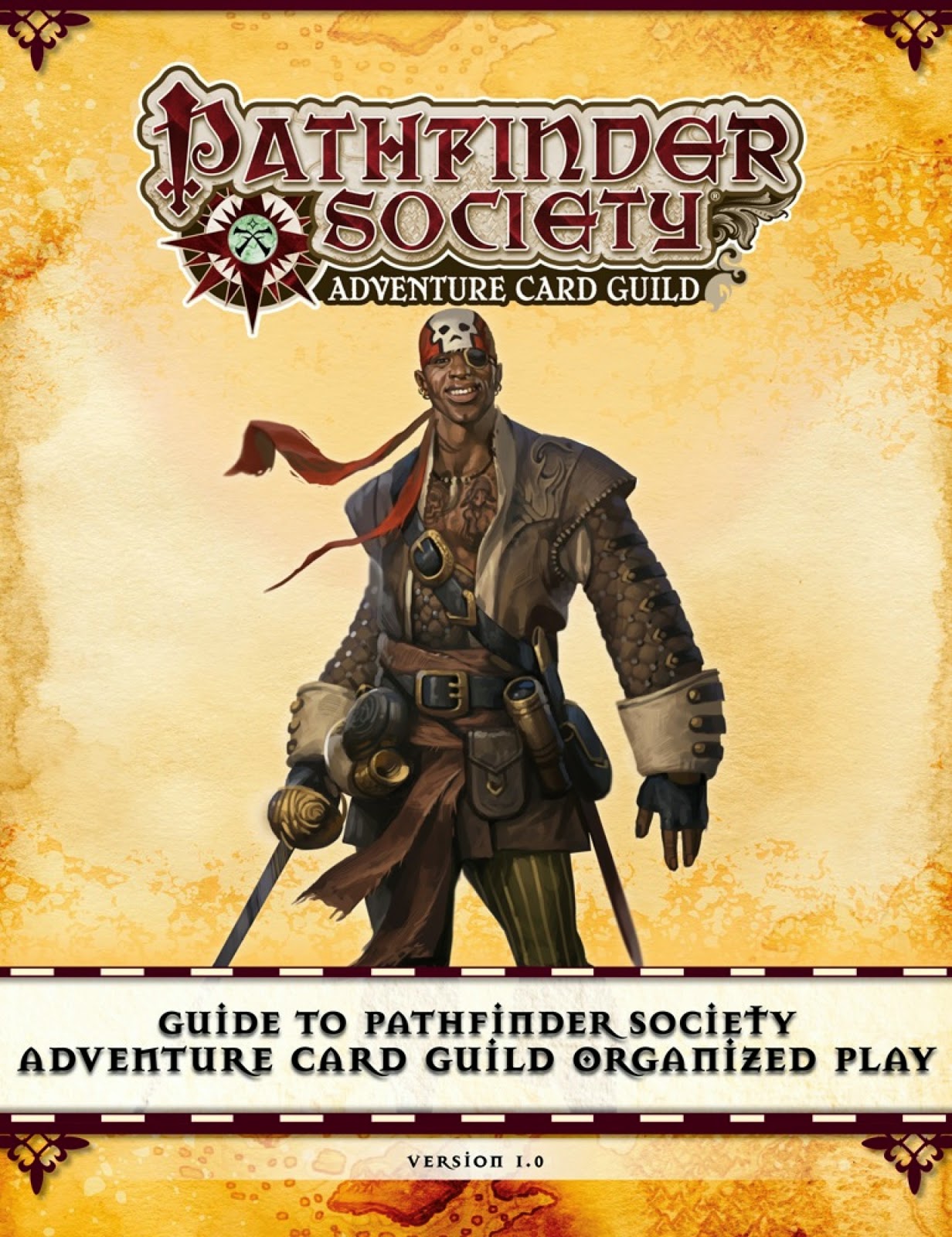 A Pathfinder ACG Class Deck (a $20-$25 investment), colored card sleeves, and matching colored polyhedral dice are necessary for participation, all of which are available at Mission Fun And Games. 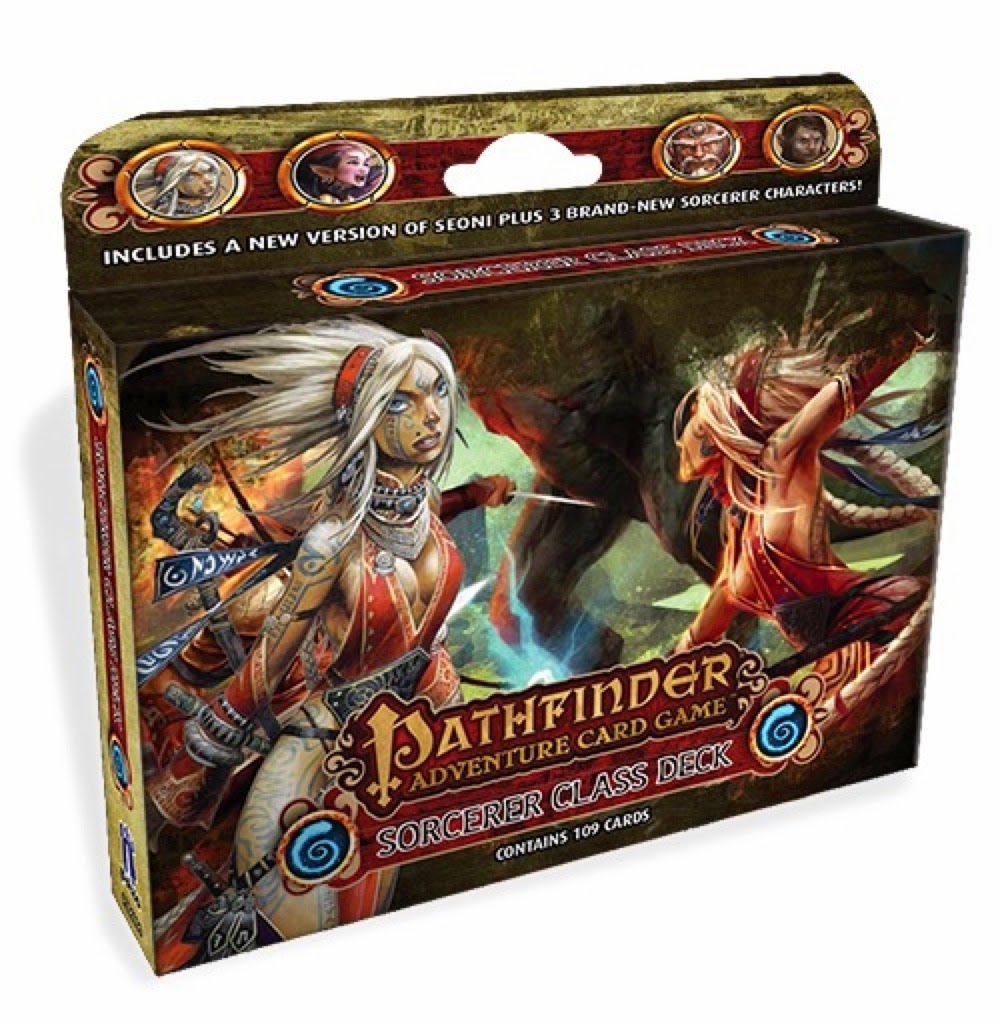 Anyone interested in participating can leave a comment here, or can register their interest with Mission Fun And Games. 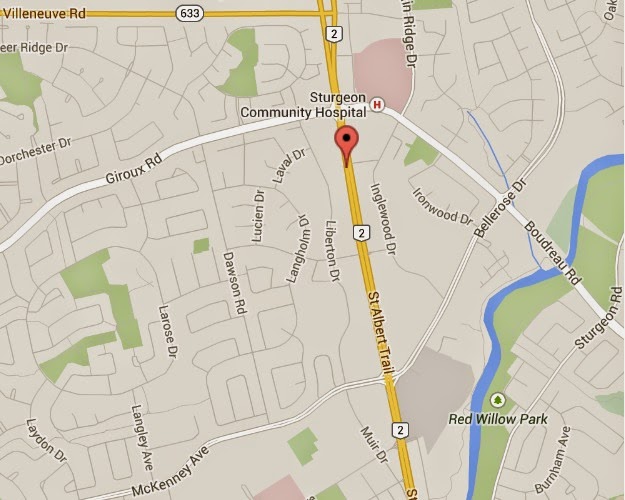 When Two Tribes Go To War