Dungeoneer Reprint In The Works? 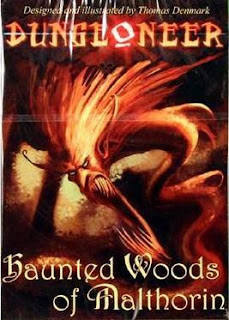 Here is the text of an email sent to one fan of Dungeoneer:

Hi Joe,Thanks for your interest in Dungeoneer and Atlas Games! Den
of
the Wererats and the Haunted
Woods of Malthorin are currently out of stock -- we
have no copies left
in our warehouse at all. We do, however, have plans to
reprint these two
expansions and make them available again. At this point, we're
negotiating
quotes with some printers but have no fixed date as to when they
might be
available. Essentially, we'd like to have them yet this year, but can
make
no guarantees.When they are close to release, we will announce it on our
homepage, http://www.atlas-games.com/.Thanks again!~Bobbi

Count me enthused! I have been searching for these two Dungeoneer card decks since I first became aware of this game.
Posted by Aaron E. Steele at 6:05 PM 1 comment: 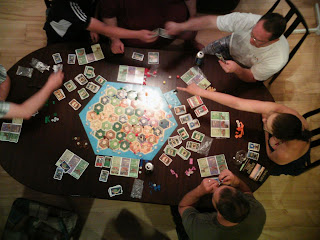 In addition to playing a half-dozen Dungeons and Dragons sessions during my vacation, we played several Settlers of Catan games.

My wife was playing, but she had to step away from the table as three of her nieces (from her side of the family) had just arrived and she was getting them organized and oriented into a spare bedroom, so one of my brothers-in-law took over her spot at the table.

We had two more relatives who wanted to play in the game, but there were only 8 sets of game-pieces. We have since rectified that situation, buying two more sets of game-pieces since my return home from the cabins. We can now play a 10-player game if the interest is there.
Posted by Aaron E. Steele at 10:07 PM 2 comments: 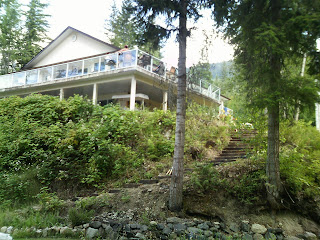 Several weeks ago, I posted pictures of the cabins. Here's another picture --this picture is taken from the road that leads down to the lake. Following the road, the lake is to the left, while to the right, the road curves and goes up a hill, bringing us up, and to the far side of the cabin. Along the stairs you see, going up to the cabin, grow blackberry and thimbleberry bushes. Having eaten my fair share of thimbleberries in my youth, they now hold little attraction to me, but my children seem to enjoy them. The blackberry bushes are very thorny, but will yield some delicious fruit later in the summer, provided we get sufficient rain. 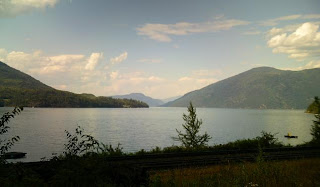 And here is a photo, taken from cabin. The dock, on the far right, is from where I snapped the earlier 'scenic views' photos. Sadly, the vacation ended too early, but don't they always?
Posted by Aaron E. Steele at 12:17 AM 9 comments: 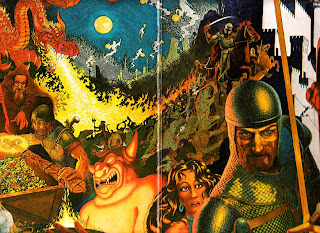 I've been looking for one of these AD&D Dungeon Masters Screens for several months, and was fortunate to recently come across one in the used gaming section of The Sentry Box. Score!

This artwork was produced by one of my favorite old-school artists, David Trampier, and features the golden idol from the cover of the original Players Handbook. It also gives a nod to the old TSR Lizardman logo (look where the dragon is breathing fire, and you will see a Lizardman with a halberd).
I find it interesting that the warrior in the bottom right corner of the screen has blue-tinged eyeballs. Did I notice that 30 years ago?
Posted by Aaron E. Steele at 3:46 PM 7 comments:

Appendix N: Knocking Down The Titles 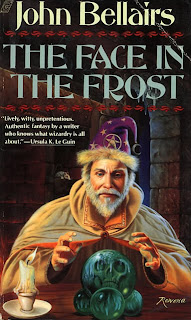 I`ve had several Appendix N titles on my `to buy` list for some time. One is The Face In The Frost, by John Bellairs, published in 1969. The other: Swords Against Darkness, an anthology series that commenced in 1977, edited by Andrew Offutt.

I went to Salmon Arm, BC yesterday (a town 20 minutes from the cabins) and decided to poke around in the used bookstore there named the Book Nook. I picked up another twenty or so paperbacks, for a dollar each, including some Zelazny and Leiber, and the two above-named books. As I went to the till to pay for my books, the owner asked me, "Are these valuable?" Like most things, they`re only valuable to the people who value them ... so I told her that I recently became interested in the old pulp fantasy and swords and sorcery tales, and wanted to see what the fuss was all about. No point in telling her that I would have paid four or more times what she was charging, was there?

I`ve already breezed through the first two Fafhrd and the Grey Mouser anthologies, and had a great time doing so. I tried to read those tales more than a decade ago, but could not get past the florid language. Having this time plunged in with both feet, I found myself laughing out loud, in answer to which I was shot puzzled stares by my family. Reading the Fafhrd and the Grey Mouser tales was like re-living those heady days, discovering Dungeons and Dragons again for the first time.

Next on my list is The Face In The Frost. I have made it through the preface and first chapter, and am beginning to understand why this appears in Appendix N: it seems to capture the comical, danger-laden, image-rich atmosphere of those early D&D games.
Posted by Aaron E. Steele at 4:49 PM 10 comments: 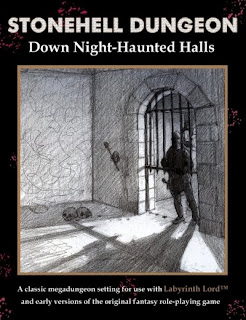 I posted yesterday that our Dungeons and Dragons sessions began with B2, Keep on the Borderlands.

I realized, after five players experienced seven PC deaths in the first session, that an exploration and problem-solving adventure Keep on the Borderlands is not. Several of the players are used to a hack-and-slash game anyway (two of them play 4E when they are at home in Victoria, BC) and the monster-laden Caves of Chaos only encourage them to employ the same approach, while using the Swords & Wizardry rule-set. Because characters are far more fragile in old-school D&D, a different approach is required, both from the players and the DM.
Through what the players suppose is the magic of time travel, the players have been transported back in time, with the box canyon of the Caves of Chaos replaced with the canyon housing Stonehell Dungeon. The Keep on the Borderlands is now just a lonely grass-covered hill, with no evidence of recent civilization to be found in the immediate vicinity of Stonehell.
So far, there have been only two combats in each the two subsequent sessions. The remainder of the time has been in exploration and speculation on what each of the discoveries could mean. Questions on what the hell is going on, that has resulted in such an abrupt change in scenery, have been met with shrugs by me -- I tell the players it is as much a mystery to me as it is to them as to what has happened. But they are speculating that something within the Dungeon will provide clues on how to get back to their own time.
They have already discovered a statue of Sir Vispera, the founder of the Knights Imperious within the box canyon of Stonehell Dungeon. Since Vispera died some 300 years before they were born, this has led them to believe that they have been transported several hundred years into the past. They also found an abandoned temple, dedicated to some snake-demon, which they have linked to the Serpent Wars and Sir Vispera.

It will be interesting to see what happens in session four. They have just now entered Stonehell Dungeon proper, having spent two sessions exploring the box canyon itself.

Well, i'm heading back to the beach. I will try to blog some more photos, and another session recap, later today or early tomorrow.

Scenic Views And The Meat-Grinder 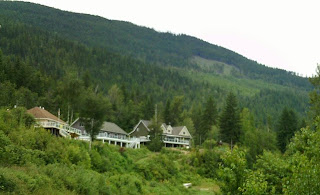 We arrived at the cabins several days ago, but I have been enjoying the time with my brothers, sisters and the extended family, so have been somewhat remiss in updating my blog. Here is a view of the cabins: most of them are obscured by foliage but you can see three cabins in this photo. There are three more cabins to the right (hidden by the trees) and two more to the left. 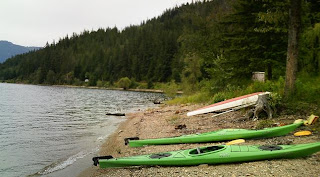 And here is a photo showing the lakeshore, taken in the opposite direction to the photo of the cabins. It has been a lovely couple of days, though the it has been cool and cloudy. Nevertheless, a cool day at the cabins beats a warm day in the city!

We have played three Dungeons and Dragons sessions so far. We are using the Swords & Wizardry white-box rule-set, and played B2, Keep on the Borderlands for our first session. The result -- five players, seven PC deaths. Among the clues distributed to the players was the need for hirelings and the avoidance of the caves further into the canyon, both of which were ignored. Even with those clues, it is clear that Keep on the Borderlands is not a module in the old-school tradition of exploration and problem solving. This is hack-and-slashery personified. Every player has lost at least once character to this D&D meat-grinder. As a result, I have switched over to Michael Curtis' Stonehell Dungeon, for our subsequent sessions, as it seems to be more conducive to an old-school approach to adventuring.
Posted by Aaron E. Steele at 9:03 PM 4 comments: