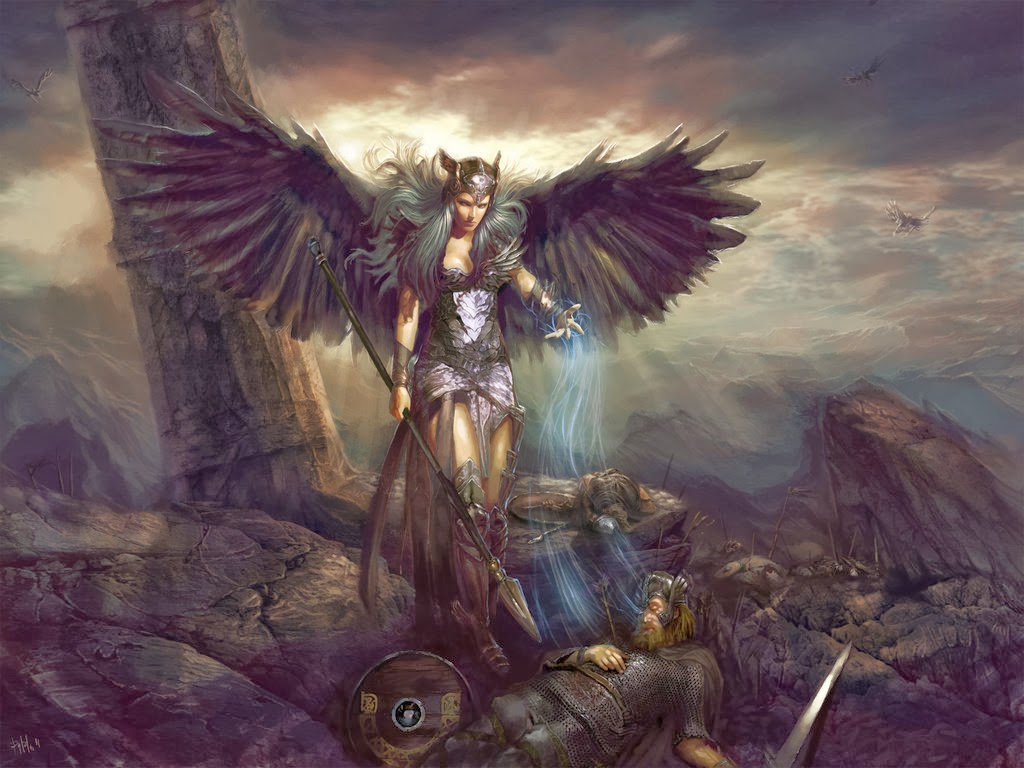 The Valkyrie is one of several new characters I would like to see added to Magic Realm in a game expansion.  The Valkyrie would not be equipped with wings, of course, but her character addition would be accompanied by a new treasure site, including a flying horse and magic spear.  The artist of the above image is thebastardson.

The Valkyrie is typically seen riding a flying horse, wielding a spear and armored with a helm, chainmail or a breastplate, and shield. 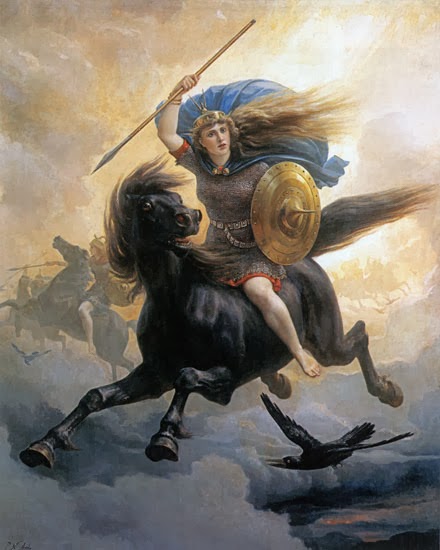 Her starting equipment would be similar to that of the Amazon, but she would be a little slower, and hit a little heavier.  She would probably resemble the Black Knight in terms of chits, but might have some grey magic to power the flying ability of the horse.

Interestingly, the first illustration, above, is uncannily similar to another famous character... 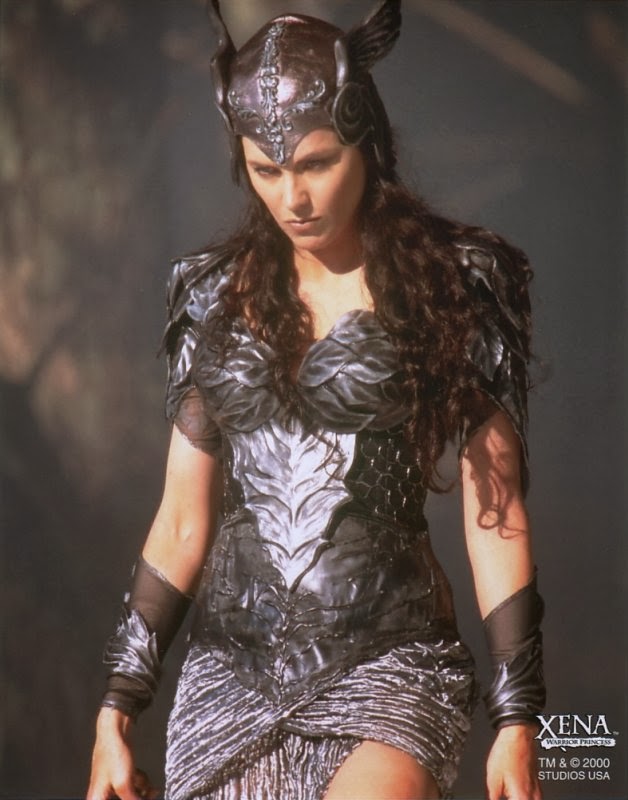 A question for my fellow OSR gamers: Is there any interest in participating in a Magic Realm game at Gencon 2014, hosted by yours truly? 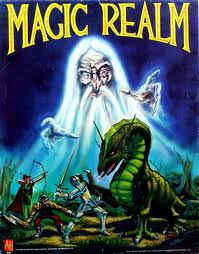 Me and the squire are planning to attend Gencon 2014, since it is also the 40th anniversary of D&D, and I thought it might be fun to organize an old-school game of Magic Realm during the convention.

The "event submission" process for Gencon opens tomorrow, and if there are at least 7 other people interested in participating in a Magic Realm game, I will submit an event proposal to the Gencon organizers.
Posted by Aaron E. Steele at 8:21 PM 4 comments: 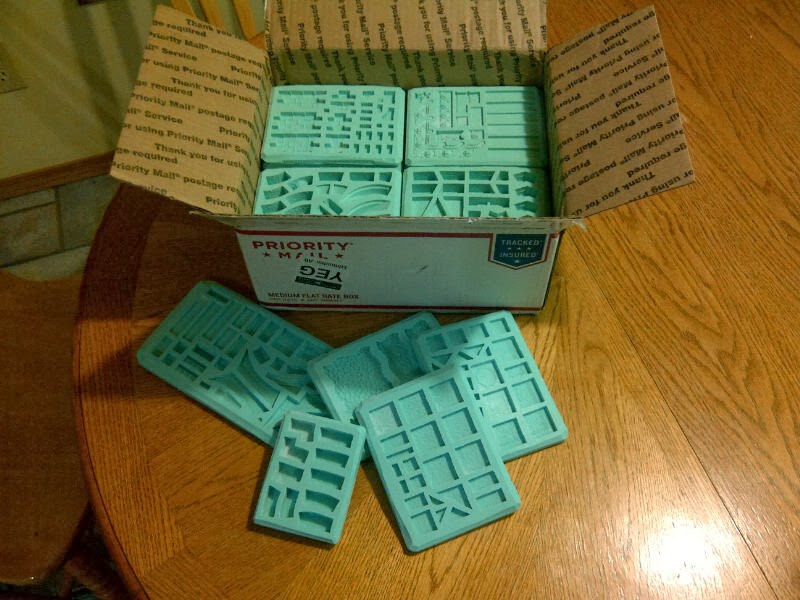 My late Christmas present was waiting for me when I arrived home from work today.  25 more Hirst Arts molds, for building dungeon and tabletop-gaming scenery out of plaster blocks.

We already have 20 Hirst Arts molds, plus several custom molds we built to speed dungeon construction.  This gives us a total of 45 Hirst Arts molds.  Now we will need to wait until spring to get some use out of these, as it is too cold outside for the plaster to properly set, and I'm not mixing plaster inside where it will make a mess of the flooring.
Posted by Aaron E. Steele at 6:42 PM 2 comments: 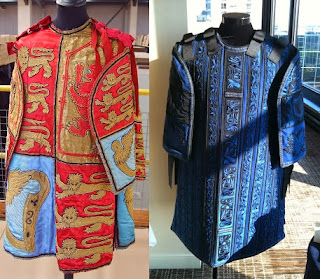 I hope my twelve year old self can be forgiven for not knowing that these jaunty little numbers are known as tabards, instead conflating tabards with scabbards.  It took some time to realize that tabards are distinct from scabbards in a very obvious way: while both are worn items, scabbards are sheaths meant to hold bladed weapons, while tabards are outerwear intended to assist in identifying friend from foe on a battlefield.
Awareness of the difference between the two improved my understanding the significance of the Imperial Tabard treasure in Avalon Hill's Magic Realm.
﻿ 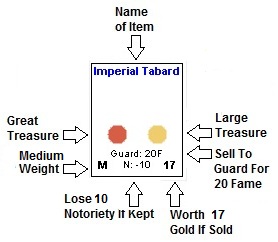 There are three treasures in Magic Realm that, in combination, represent the Imperial Regalia.  The first is the Imperial Tabard.  While worth only 17 Gold if sold, the Guard award you with 20 Fame if you return it to them, as it represents the office of the long-departed King, whom the Guard loyally served.  This treasure is perhaps the only one in the Magic Realm game with no spell or in-game effect attached. 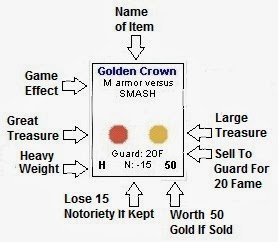 The second Imperial treasure is the King's Golden Crown.  A heavy treasure, worth 50 Gold, it too attracts 20 Fame if sold to the Guard.   It can be used as medium armor against smash attacks, but I can't see many players risking a treasure this valuable in such reckless fashion. 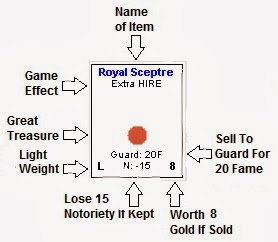 The final Imperial treasure is the Royal Sceptre.  While this is worth only 8 Gold, it can be sold to the Guard for an additional 20 Fame.  The Royal Sceptre's in-game effect is to permit an extra HIRE phase each game-day.  That is a powerful advantage to the many Magic Realm characters whose winning strategies rely on hiring and controlling henchmen in order to fulfil their victory conditions.  It is often better for those characters to hold on to the Royal Sceptre, despite the tempting Fame reward that comes with its sale to the Guard.
Posted by Aaron E. Steele at 8:14 PM No comments: