B2: The Keep On The Borderlands 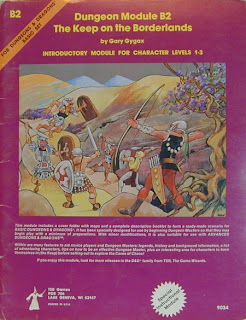 Back in March 2009, JM over at Grognardia wrote a retrospective of Module B2, The Keep on the Borderlands. JM provided a fine retrospective of that module, I certainly recommend that you read his comments.

Several weeks ago, a young poster on the WOTC website provided his own review of B2, which he had converted to, and reportedly played using, the 3e/4e rules. He also provided a reference to his website.
Here is an excerpt from his WOTC review.
"First thoughts: I like the Erol Otus back cover painting with the adventurers approaching the keep in the sunset. But the module is pretty… well, “basic.” One player told me an unverified rumor that a proofreader at Wizards (sic) back in the day was reading “The Keep on the Borderland” and marked it all up with red ink, saying “This is the stupidest adventure ever! It’s just a list of all the low-level monstrous humanoids in the game, living in caves right next to one another, waiting for the PCs to come in and kill them!” Apparently he didn’t notice that the author byline read “Gary Gygax” and he didn’t last much longer at the company."
I have never heard this story before. Considering that B2 was published in 1979, and the principals at TSR were well known to each other, it seems unlikely that this actually occurred. Interesting and fun urban legend though. His review got me thinking about what might have inspired Gary Gygax to write this early D&D module.
Now i'm going to create another urban legend of my own.
Posted by Aaron E. Steele at 6:22 PM