Tales of the Bizarre: A Fistful of Turkeys 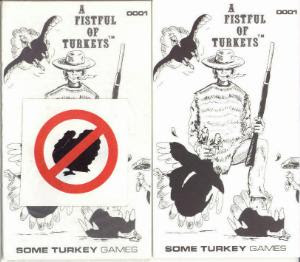 I gather there were some hard feelings when Steven Jackson left Metagaming, in the early 1980's, to set up Steve Jackson games. Steve Jackson had developed The Fantasy Trip, along with several other microgames, if I recall correctly, and it must have been a bit of a blow for Metagaming to lose that talent. I don't know the full story of the split, but I have always been curious.

If we knew the full story about the departure of Steve Jackson, we might forgive the production of this microgame. Was this game produced out of malice, or was it simply good-natured ribbing?

A Fistful of Turkeys is, I presume, both homage to the movie "A Fistful of Dollars" starring Clint Eastwood, and a send-up of Steve Jackson's "trade-dress" and game design style.

I've never played, nor seen a paper copy of, A Fistful of Turkeys, although I have quite a collection of microgames. If it is actually worth owning (for it's gameplay) please let me know.

As for the Steve Jackson microgames, I had Steve Jackson's "Car Wars" game back in the day, but that perished in a garage fire, and was one of the games that, while I enjoyed it as a teenager, I never felt the need to re-establish it in my collection.
Posted by Aaron E. Steele at 11:56 AM

I've never been a big Steve Jackson fan myself, but I DID play the hell out of Car Wars Deluxe.

However, it's nearly as much a board game as an RPG (and it's nearly impossible to play without the pieces).

"Was this game produced out of malice, or was it simply good-natured ribbing?"

I'm not sure I would go so far to say that it was malice, but Howard Thompson had a lot of resentment towards Steve for leaving and starting his own competing company, especially as Metagming's own fortunes were taking a turn for the worse. Note also that later printings (81 and 82) and editions of all The Fantasy Trip products removed Steve Jackson's name as designer from those games.

Oh, it was malice. Keep in mind that Howard Thompson filed lawsuits in an attempt to derail publication of Jackson's "One Page Bulge" and OGRE/GEV games (the latter two, BTW, had already been agreed to by H.T. that they belonged to Jackson). The legal proceedings went nowhere, frivolous as they were, but it shows H.T.s mentality.

And I have a copy of Fistful of Turkeys. Spite oozes from every paragraph. Don't forget also the pages wasted in various issues of Interplay attacking Steve Jackson. Indeed, the very existence of Interplay was a direct result of the split with S.J. (recall that the latter bought Space Gamer, so with the rift there was no way Metagaming would approach them for publishing anything)