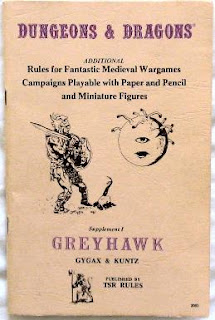 It's always wise to check your facts before putting anything in writing.

This is good counsel, as, in the case of my earlier post, on the Paladin, my thinking was wrong. While I presumed the Paladin first appeared in AD&D, she actually appears in Supplement I: Greyhawk, in 1976, two years prior to the AD&D Players Handbook.

In Greyhawk, the Paladin is not really a class of its own. It has no separate experience table, nor does it have any of the intermediate named levels that mark the other classes. Instead, a figher can, if she has a Charisma of 17 or higher, and is lawful from the commencement of play, opt to pursue Paladinhood. The Greyhawk Supplement is vague on the method of attaining this station.

The actual text from the Supplement.

"In addition, certain lawful fighters may opt to become paladins."

"Charisma scores of 17 or greater by fighters indicate the possibility of paladin status IF THEY ARE LAWFUL from the commencement of play for that character. If such fighters elect to they can then become paladins..."

The text goes on to chronicle the restrictions and advantages of this station, much of which appears in the AD&D Players Handbook.

It's interesting to again discover that much of what appeared in AD&D was already in OD&D, in primitive form.

I'm still not a fan of the class as written, though. Not even in OD&D.
Posted by Aaron E. Steele at 7:28 PM