We reach day 28, the final day of the Black Knight's adventures in the Magic Realm.  As day 28 is the end of a week, another kind of magic permeates the Realm.  This time, gold (fairie) magic is abundant.  As the Black Knight has no spell-casting abilities, the availability of gold magic is moot. 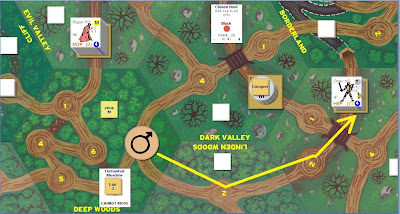 The Black Knight is still suffering from a curse laid upon him when he disturbed and looted the Mouldy Skeleton decomposing in the Troll's Vault.  The Black Knight must reach the Chapel by the end of the day if he wishes to have the curse removed and benefit from his accumulated Fame.

For day 28, we record a hide action (courtesy of our Cloak Of Mist), three move actions, and a trade action (to relieve ourselves of some unwanted treasures and acquire gold for them instead).

The prowling monster roll results in a 1:  Dragons.

This is the end of a week, so not only does the monster roll determine which monsters are prowling, but it also determines which defeated monsters are returned to the game.  We killed the Tremendous Dragon protecting the Lair just under two weeks ago.  Because we rolled a 1 at the end of  a week, any monsters missing from that row are returned to the monster table.  Thus another Dragon appears to take the defeated Dragon's place (the Dragon circled in red, above).

Monsters and Denizens only ever appear and move on the Magic Realm map at the end of a player's turn, so the fact that a re-populated Dragon's Lair is in the Deep Woods, where we start day 28, is immaterial.

The Black Knight successfully hides, as we roll a 5 on his hide attempt.

He uses his three move actions to travel to the Chapel and uses his trade action to sell the gold helmet, jade shield, axe and regular helmet to the Order for 59 gold.  That leaves the Black Knight with 122 gold, well in excess of the 30 needed to fulfil his gold victory condition.

The Black Knight elected not to sell his other owned items and treasures, including the Cloak Of Mist, Gloves of Strength, Warhorse, and Lucky Charm. 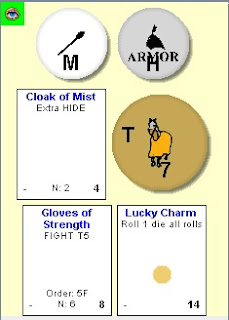 He also kept a couple of extra weapons (the broadsword and Morningstar), the potions (Gripping Dust and Penetrating Grease), and the Dragonfang Necklace (the red dot on that treasure signifies a "Great Treasure" which is worth bonus victory points).

Most Magic Realm players will sell all of their treasure and equipment on day 28, if they end the day in a safe building (where the Denizens are friendly to the character).  We could have done the same here, as we merely need to spend 4 gold buying drinks for the Order to ensure their temporary friendship.  But unless I absolutely need more gold to win the game, I usually hold on to my special items, the ones that helped in my success. 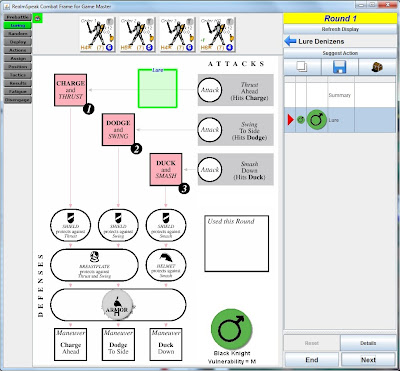 At the end of the day, we roll on the meeting table to see how the Order reacts to the presence of the Black Knight.  With a roll of 1, the Order is thrilled to have him at the Chapel.  The Order overlooks the Black Knight's curse, as they are still grateful for his recovery and return of the Sacred Statue.  The curse is lifted at midnight, and the game ends.

The Black Knight concludes his foray into the Magic Realm, having collected 1/0 Great Treasures (the Dragonfang Necklace), 67/10 Fame, 143/60 Notoriety (123 notoriety for his kills, plus 20 notoriety for the retained treasures), and 82/30 Gold (he possessed 122 gold, but his starting equipment was worth 40 gold, the value of which is deducted from his final score).

The Black Knight ends the game, having fulfilled his pre-selected victory conditions of 10 fame, 60 notoriety and 30 gold.  He in fact collected the equivalent of 16, rather than 5, victory points.  All in all a pretty decent game result.
Posted by Aaron E. Steele at 6:42 AM

Yay! A win. Congrats. Some lucky roles in there; but, generally the win seems to be due to thorough understanding of the esoteric rules.

Yes, I did recover some handy treasures. But a player should be able to register a win with the Black Knight, by playing to his strengths, and without any additional treasures (other than an axe or broadsword from the guard's loot).