The Black Knight begins his final week in the Magic Realm having already met all of his victory conditions.  He has 20/10 fame, 76/60 notoriety, and 63/30 gold.  During his final week, the Black Knight's goal is to collect as much additional fame, notoriety, gold and treasure as possible.  He wants to avoid the Octopus and the Winged Demon, the only two Monsters that pose a threat to him.

Yesterday, day 21, the Black Knight recovered the Gloves of Strength from the Dragon's Lair, a treasure that permits him to deal tremendous damage with the Morningstar he purchased from the Order.

Yesterday, with the Gloves and Morningstar, he killed the Tremendous Dragon making the Lair it's home.  He has now recovered three of the seven treasures there.

The Black Knight will spend one more day looting the Lair, which still contains four treasures.  After that, he will seek out some additional opponents and treasure sites. 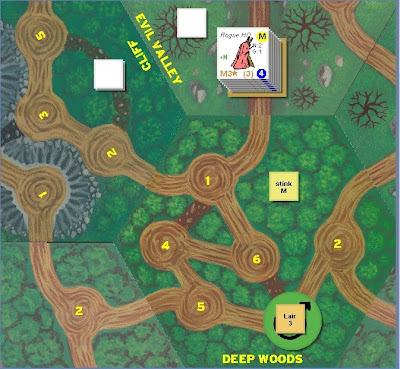 For day 22, we record a hide action and four search actions.

Today's prowling monster roll is a 1, which means Dragons are on the move.  The Dragon that appears in the Deep Woods has already been dispatched, so no other Dragons will appear today.

For his first action, the Black Knight attempts to hide, rolling a 2 and 5.  His hide action is successful.

The third loot roll is double ones.  The Black Knight locates the Enchanted Meadow!

The Enchanted Meadow is the site of a magical pony, and the Truesteel sword (the best weapon in the game).

The are both very difficult to obtain:  since we must roll two dice, taking the higher of the two, during each search action, there's a 3% chance of recovering the pony, and an 8% chance of obtaining the Truesteel sword.  In comparison, there is a 30% chance we will obtain nothing, and 25% chance of being cursed. 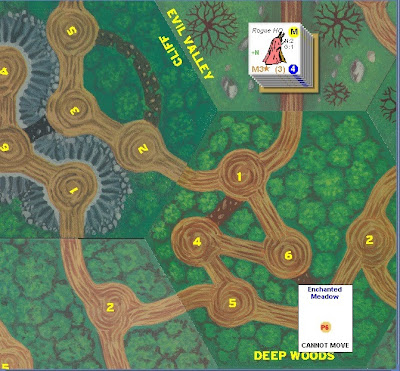 Our last search roll results in 4 and 5.  Again, since there are now only 3 treasures left, we obtain nothing.

No Monsters appear at the end of the day.
Posted by Aaron E. Steele at 7:01 AM