The Black Knight spent day 18 in the Magic Realm, haggling with the Order over the prices of a warhorse and Morningstar, which cost him 26 and 20 gold, respectively (when you factor in the cost of buying the related rounds of drinks).

In addition to 63 gold, the Black Knight has the following items.

He has his mace readied, is wearing heavy armor and the Cloak of Mist, and is riding his warhorse.

His additional equipment includes an axe, the Gripping Dust, a helmet, a broadsword, and a Morningstar.

He is still at the Chapel, with the Order.  The Black Knight could wait at the Chapel, for the Lancers to arrive, as they are another hated foe to dispatch.

Or, he could head back to the Inn, as the warhorse gives the Black Knight an excellent chance of defeating the resident Rogues.

I think the better choice is to travel to the Deep Woods, and try to locate, and loot, the Dragon's Lair.  You may recall that we travelled past the location of the Dragon's Lair on the way to visit the Guardhouse.  The Dragon's Lair has seven treasures (three large and four small), and it would be nice to pick up at least 3 or 4 of those. 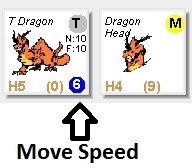 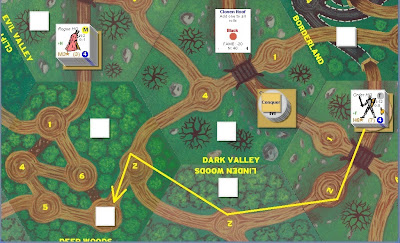 At the start of day 19, we record the Black Knight's actions: four moves and an extra hide, courtesy of the Cloak Of Mist.  He is taking a bit of a risk here, as the Black Knight will end the day in the Deep Woods, with only one hide attempt.  With one attempt, there is a 70% chance of hiding.  However, as mentioned, he can easily run away from the Tremendous Dragon if it appears.  The only downside is that the Black Knight would need to expend extra hide and move actions, tomorrow, to arrive again at the location of the Lair, if he is unhidden at the end of day 19.

Our roll for prowling monsters results in a 3:  Goblins and the Octopus.  We already know that the Deep Woods is the home to the Tremendous Dragon and Spiders, so the Black Knight should be safe from attack today.

The Black Knight rides his warhorse to the Dragon's Lair and attempts to hide.  With a roll of 1 and 2, his hide is successful.  As no monsters appear, as expected, the Black Knight ends his day, hidden in the clearing.  Tomorrow, he will attempt to locate the Dragon's Lair, and start looting its contents.
Posted by Aaron E. Steele at 7:10 PM