Verisimilitude. The Nemesis Of Fun. 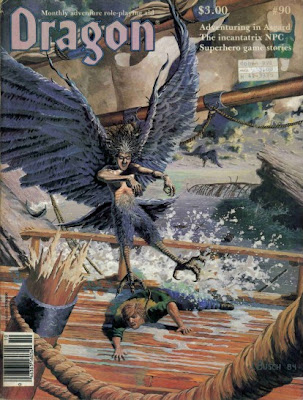 These two letters to the editor are taken from Dragon Magazine Issue #90, October 1984. Each, in their own way, demonstrate, quite ably, why verisimilitude is the nemesis of fun.

After the publication of the lengthy article,
Physics and Falling Damage. in issue #88, I
feel compelled to voice a concern.

When I first opened my Players Handbook,
one thing was clear to me . this was a game, not
a simulation. Characters could do superhuman
feats of strength and magic. Also, the combat
system revolved around one-minute intervals of
time. It was very unrealistic . it was a game.

However, in the last few years DRAGON
Magazine has time and again presented .realistic
. studies about combat, weather, etc. In fact,
the general attitude of the gaming public has
shifted toward simulations.

The most extreme example of this attempt at
realism came in the form of the aforementioned
article. Six pages were devoted to a complicated
detailing of a falling damage system. .Scientific.
facts and theories were presented to give a realistic
simulation of the effects of a falling body in a
gravity field. It was very interesting, very
lengthy, and very un-needed.

Mr. Gygax himself states on page 9 of the
DMG that AD&D is a game, not a simulation.
Further, he says that any attempt at realism
would be an .absurd effort.. Also, he writes that
a realistic simulation in the realm of make-believe
.can be deemed only a dismal failure.; and also
that readers who seek realism .must search
elsewhere..

Often, this magazine presents articles trying to
explain rules (in the AD&D game) in realistic
terms. What a waste of energy, time, and space!
To try to add realistic changes into an inherently
unrealistic game would bring about its collapse.
Many times you have tried to explain, in realistic
terms, why certain classes can or cannot use
certain weapons. This is un-needed, for those
restrictions were made to keep the game in balance
and to aid in role-playing. Instead of explaining
why or why not certain weapons can be
used, for instance, maybe the space could be used
to list new weapons, or ways players can maximize
available weapon use.

In conclusion, I would like to say (in my opinion,
of course) that the downfall of the AD&D
game may not come from an outside agent, but
from within the gaming world. In the quest for
quasi-realism, the game may be greatly altered or
even forgotten. This would be a great loss.

I regret that you have relegated the fundamental
rules governing the universe to a matter of
opinion in the pages of DRAGON #88. While
Steve Winter.s rebuttal does much to mitigate my
horror, I still feel the need to comment on Arn
Ashleigh Parker.s article about falling damage.

Mr. Parker presents a cogent and physically
valid argument for kinetic energy determining
injury from a fall, only to arbitrarily dismiss the
conclusion because it doesn.t sound right. We
have precious few physical laws and . despite his
claim to the contrary . one of these does necessitate
kinetic energy having a direct effect on falling
damage. It is the often-quoted Law of Conservation
of Matter and Energy, which says in part
.energy is neither created nor destroyed.. The
direct consequence of this law is that all factors of
the kinetic energy equation (not just the square
root of one factor) come into play.

Mr. Parker.s reply is that .physics . . . is
very much intuitive. It does not make sense that
the square damage..of velocity linearly relates to falling

Reasoning based on intuition and what sounds
right is not science. It is handwaving and quackery.
Furthermore, the lack of professionalism
displayed by DRAGON Magazine in printing
such pseudo-science is disturbing.

In closing, let me say that Steve Winter.s
rebuttal was eloquent and meticulously correct as
far as he took it. There remains, however, an
open niche for a falling damage system based on
a given amount of damage per unit of distance
fallen (like the Players Handbook method), but
which incorporates a few other factors. There is
no current provision for good or poor landings,
no weight factor (mass is every bit as important
as the squared velocity), short falls are entirely
too lethal for zero- and first-level characters, and
long falls are much too safe for high-level adventurers.
Each of these points must be addressed in
any viable alternative.

Perhaps verisimiltude is taken to much to mean the literal truth or fact.

"Similar to the truth" can be rather a gray area. Just because it looks like a duck and quacks like a duck doesn't make it a duck. It could be an alien shapeshifter. :)

Emphasizing a simulation model over a fantasy one can feel like running into a brick wall = no fun.

Good stuff, thanks for sharing. And for the record, DOWN WITH VERISIMILITUDE!

So many gamers somehow thought (and continue to!) that Hit Points = Meat Points and then complain the rest of the rules don't work properly for Meat Points.

One of my favorite words in the language. Academics lean on it all the time.

Quite timely, Pal, thanks for this. I'm reposting my much-hated Horse Movement Rate post that was killed by blogger tomorrow, and I've got to add a link to this. There are some mechanics that are just too uninteresting to spend the effort to improve. Sometimes I learn a lot by trying to come up with a more "realistic" mechanic, and other times it's a just a drudgery that ultimately doesn't add to the game at all.

That was not my understanding of definition of vermi. To me worrying about realism esp at expense of fun in a game is simulationism and/or being a jacktard. Vermi means supporting suspension of disbelief, flavor, atmosphere, describing all 5 senses. something chasing realism destroys.

This definition seems to support my view. But regardless the content/spirit of your post is right on and I can't agree more.

Gygax was ridiculous in saying that this is a fantasy game, so it is pointless to talk about realism. That begs the question.

Bill Underwood (the creator of BMG as you probably know) was far ahead of his time and far ahead of Gygax when in 1980 he wrote in the introduction of his fantasy rpg that "when players ask their referees for reality, what they are really calling for is PLAUSIBILITY, and that is a necessary part of every game".