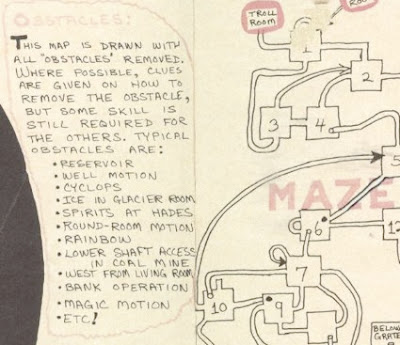 The following comments on the ODnD Boards were sufficiently inspirational that I thought it worthwhile re-producing them here. A good start to understanding what I mean by workbook design. This post is by korgoth, of Leander, TX. Anyone in the osr-sphere know more about this astute fellow?
Re: How do you go about designing your MegaDungeon
« Reply #14 on Dec 3, 2007, 11:59am »

Since I'm using an original world, I first figured out what that world was like, and more specifically what the starting region was like (not even mapped yet, but I have developed it conceptually and know broad strokes of the timeline). Then I needed to decide on the specific location. I was originally going to put it under a ruined wizard's tower, but I changed my mind and decided to put it underneath the main city of the campaign (since humanity is going extinct in this world, and it is very arid, and the city itself is a ruined pile of different styles and cultures, my primary visual inspiration is pre-liberation Kabul).

That being decided, I felt the need to establish the "why" of the place (I'm a philosopher, sue me!). I can't work without the "why", without some inkling of the causes. I decided that the megadungeon incorporates a number of different delvings which had a number of different purposes, including catacombs, a necropolis, a dwarven colony, an underground human community, an outpost of the Ancients, and several much weirder projects. As legends of these places are uncovered, each distinct area of the Megadungeon can become a destination in itself: if the players find out that the Ancients had a presence down there, they may deliberately seek it out in order to plunder it (that may or may not be a wise decision... depends on how much you know about the Ancients!). This way the Megadungeon contains some meta-puzzles: where is the Crypt of Resplendent Decay? Is the Upper Oubliette really an oubliette? How do we find the Place of the Ancient Ones? I'm calling these "meta-puzzles" because they're not puzzles in the dungeon, but puzzles about it. It also lets me develop legends of the place that the players can learn.

In view of this, I made up a master plan of the levels and sub-levels. I basically just represented each level as a square, determined how many there would be, and divided the squares in such a way as to locate my distinct areas and sub-levels. The way I worked it out, there really aren't any "main levels" - each level of physical depth is a collection of sub-levels. Many of them are interconnected, and many are not. There are places where you will have to go down for a long time before you can go very far West, for example.

Now I am in the middle of drawing these levels. This might be a mistake, because as I draw places I have some good ideas about what can go in a given place. I might forget some of these ideas... fortunately, I am more focused on just making the maps that it isn't too important. Of the good ideas that I have had, the ones that are most memorable will still be in my mind when I revist the upper levels in the next phase. Or so goes my plan. I am currently planning on completing all the maps through level 6 (a little over half way, and a pivotal depth in my master plan) before moving to the next phase.

The next phase will be detailing and stocking. I want to come up with good physical descriptions of the various areas, because there will be distinct architectural styles as well as the general variations in sights, sounds and smells that I want to pay attention to. I try to make my DMing very 'sense-evocative' (I avoid the term "sensual" so that there aren't any misunderstandings!) so I need to have good notes about how things look, smell, etc. And I need to stock those rooms! This will be a fun phase because of all the weird stuff I hope to accomplish.

The last phase will be filling in things like wandering monster tables for the levels (some will have such things, some may not) and maybe some general tables like an "empty room dressing table" where incidental, weird or even unique (and desirable or terrible!) things can populate those rooms I will designate as "empty". I can then amend the entries for those rooms on the fly, rather than having to note "there are small piles of mustard seeds and scraps of leather on the floor here"... that is something that could be random in placement. Of course, there are some levels that are so strange or out of the way that they will need their own tables for such things.

After I do all of that, I'll repeat the last phases (mapping, stocking and detailing) for levels 7+.
Posted by Aaron E. Steele at 3:33 PM