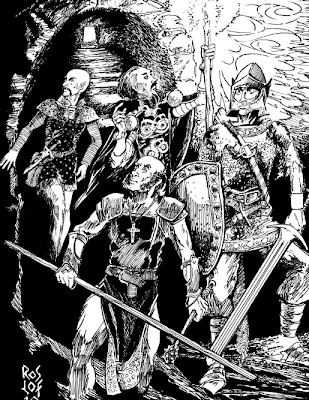 Several others have already posted this awesome Dungeon Crawl Classics Role Playing Game character generator. I'm posting it here again simply because it will be easier for me to find later on.

This is a great little tool to use to generate random characters for DCC RPG. I will probably allow the players to designate one of the four characters so generated to be their character, with the other three acting as henchmen.
Now, I just need to finish my "henchmen shall be splintered!" rules to accompany DCC RPG and i'll be good to give this game a spin!
Posted by Aaron E. Steele at 12:56 PM

I don't know if I would make the player commit to picking their character before the "winnowing" begins. Those 0-level characters seem to be as fragile as champagne flutes.

In practice I don't think it will matter, but I like the idea of each player having a "prime" character, who may die, resulting in one of the henchmen being promoted to new prime.