Sex In Dungeons And Dragons 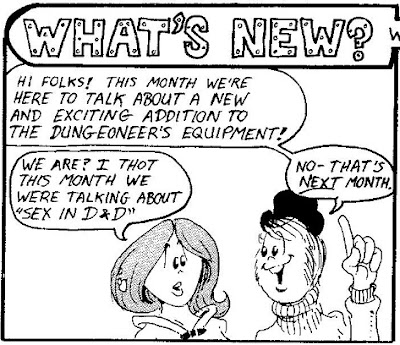 One of the longest running gags in the early days of Dragon Magazine was the highly anticipated, never consummated episode of Sex In DnD, in the What's New cartoon, featuring the droll Phil Foglio and the randy and sexually-frustrated Dixie Null.

For dozens of issues of Dragon magazine, What's New promised a Sex in DnD strip, but the episode was delayed for various increasingly-absurd reasons.

Early on, due to delays in the arrival of some "equipment" for the Sex in DnD episode, Phil and Dixie instead report on a new approach to miniature warfare, using your bed rather than a sandtable. 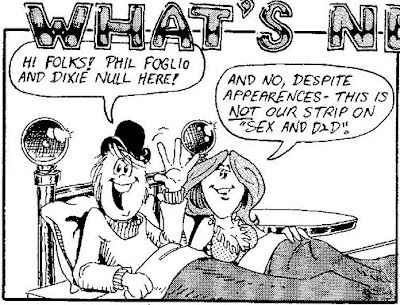 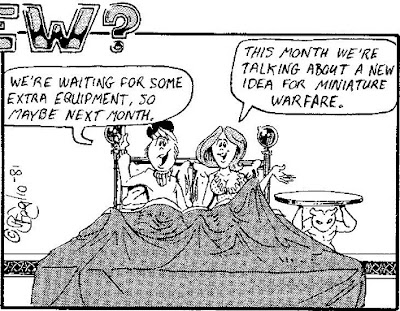 There are some distinct disadvantages to this wargaming approach, not the least of which is the combination of miniatures with pointed weapons and a waterbed.
The introduction of color to the What's New cartoon precipitated a further delay in the Sex In DnD episode, for fear of overloading the colour generator. Instead, we are treated to a review of a new role-playing game, entitled "Price Wars" where you take the roles of competing FLG stores, trying to drive the other stores out of business. This can only end badly! 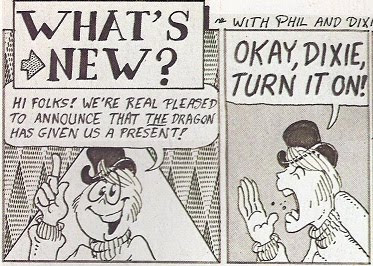 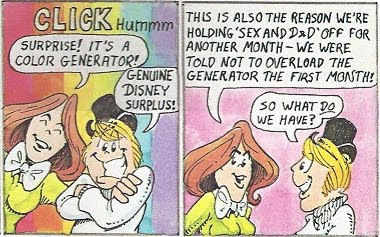 Dixie's suggestion that they spice up their private lives with a little cosplay, provides Phil with the inspiration for an episode on costumes for female characters. 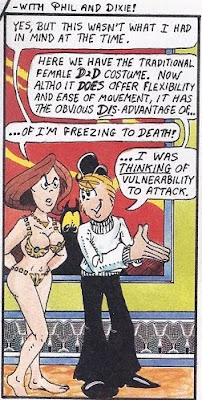 Dixie gets her revenge at the end of the cartoon with a little costume-reversal.
In observance of Valentine's Day, Phil and Dixie take a lover's stroll through the Dungeon. Well, it seemed like a good idea at the time. 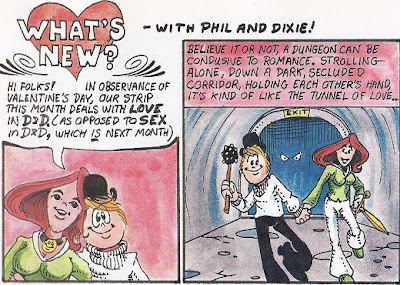 The omnipresent Dragon Magazine editors kibosh several attempts to deliver on the Sex In DnD strip. 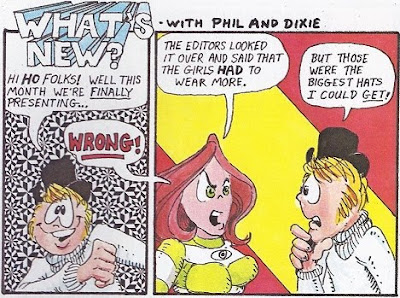 When the editors are not objecting to the fact that the nude models are wearing hats that are too small, they are ringing Phil and Dixie to remind them of their responsibilities to report on the newest games releases. Thanks Kim, way to ruin an anniversary! 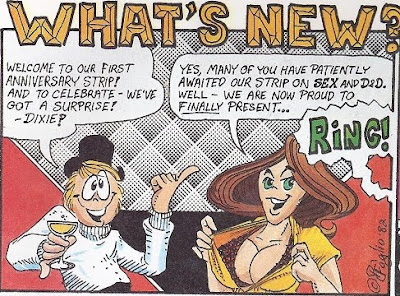 All those out-of-shape role-players provide the inspiration for the next episode, on how to keep in shape when your principal form of exercize is reaching for the dice. 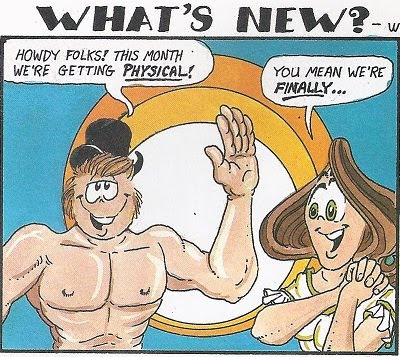 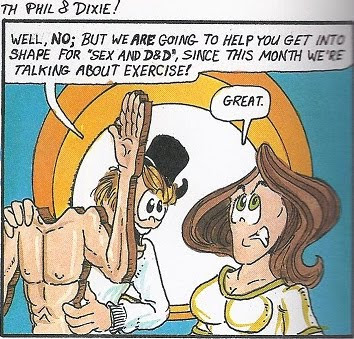 Robot cartoonists threaten the livelihood of Phil and Dixie, but Phil is more concerned about the possibility that he and Dixie will be unable to deliver on their promise to do a Sex In DnD episode than he is about the loss of his job. 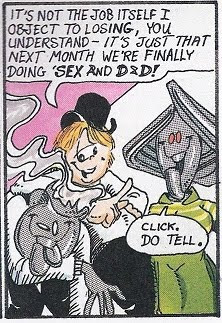 The What's New cartoon is supposed to highlight more than just Sex In DnD, it is also a forum for reporting on the latest games releases and role-playing controversies. But sometimes Phil fails to take his responsibility seriously.

Finally! All of the impediments to a Sex In DnD strip have been overcome! After years of frustration, we finally get to the actual Sex In DnD episode, complete with gymnastic and other equipment. 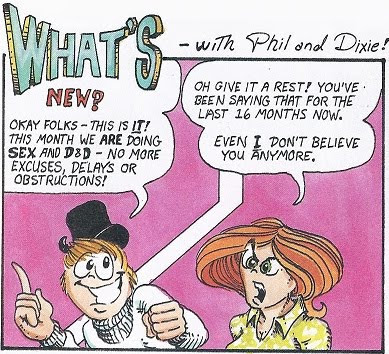 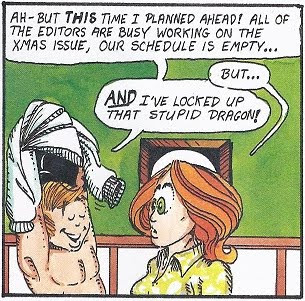 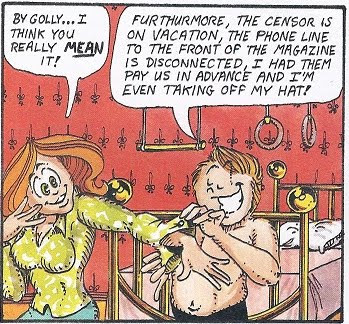 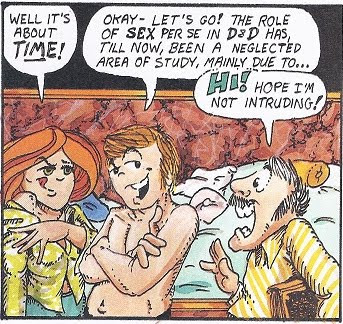 A salesman from the local Minigame company spoils the fun of course, with the promise of a big fat paycheck in exchange for reviewing his latest game. His comeuppance, drawn and quartered by four draft horses, is too lenient, in my opinion.
Several April Fool's Sex In DnD pranks are played on the What's New readers, such that even Dixie sees them coming a mile away. But what happens when the April Fool's prank IS the Sex In DnD episode? 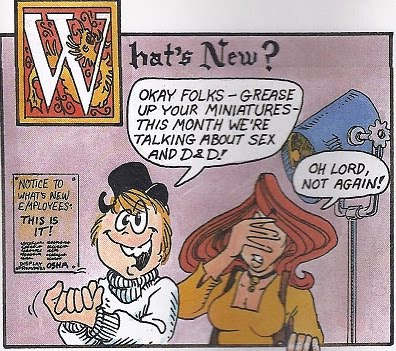 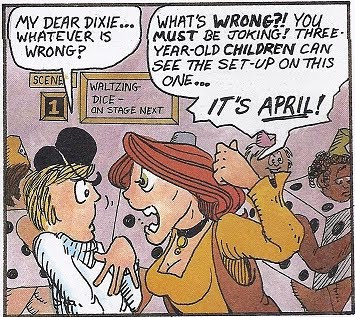 Like poor Dixie wasn't frustrated enough: Phil accidentally switches the minds of Dixie and their pet dragon. He offers to hook her up with a cute dragon so that she can get some satisfaction. She doesn't take to kindly to his jest! 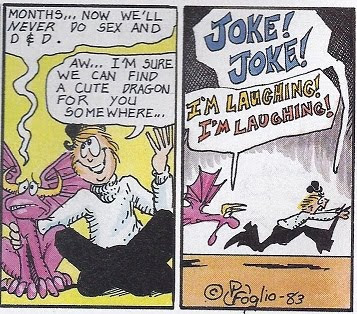 The mind switcheroo finally wears off, and Dixie gets some satisfaction. We never get our promised Sex In DnD episode though! 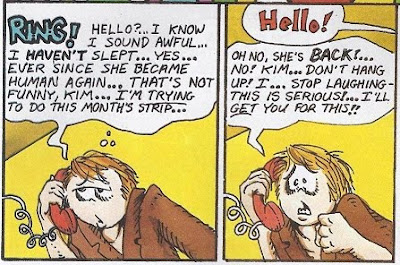 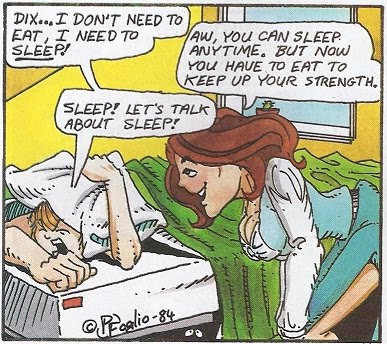 I came here for "Sex in D&D" and all I got was no sex in Foglio's Dragon magazine strip! What the deuce?!?

I feared it might be a treatment of the horrific, hundreds-of-pages-long text houserules document that was floating around in the 90's.

Phil and Dixie finally did do "Sex and D&D" although not in th e pages of Dragon. The second collection of "What's New" featured it as a bonus strip.

That was a great post! I remember some of these.

I feared it might be a treatment of the horrific, hundreds-of-pages-long text houserules document that was floating around in the 90's.

8sigh* Talk about nostalgia. I loved the strip. But c'mon Stuart, the Unlawful guide to Carnal Knowledge wasn't THAT long, and some of the material turned out to be pretty good.

One of my players was delighted to find out her carousing had got her character pregnant in one campaign a few years back. Balancing an adventurer career with motherhood proved quite an interesting RP challange, one she talks about quite warmly to this day.

Besides, the whole idea of carousing and the inevitable cosequences is a D&D trope that goes back to Gary's infamouse random prostitute tables back in the seventies and eighties. And in terms of a fantasy trope, it goes back even further than that.

There was a sex article in Dragon (by Roger Moore, I think) entitled "Everything you wanted to know about sex in D&D but were afraid to ask." Like most Dragon articles centering around that subject, it was a humor piece.

I saw Phil Foglio at WotC's Magic: The Unveiling party, where they had just sold a million units of Magic and were throwing a party. He looks nothing like his cartoon avatar.

Ah yeah, I remember old Roger of Morria. His dragon articles usually had me in stitches -and he wrote the best editorials in Dragon by far.

Wow, what a trip down memory lane! :D