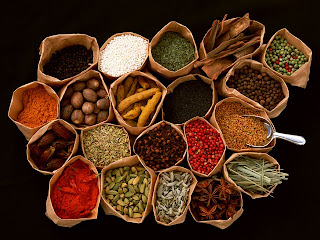 I started working on this spices treasure table, as a way to spice things up during treasure distribution, but have not yet completed it. I'm intending to add comments on the scents of each, so as not reveal what the actual spice is. I was also going to add a related monetary value and the form that it takes. Feel free to steal this and update it to your liking.

Spices Treasure Table (roll two different coloured d6's; designate one as the "tens" digit, the other as the "ones" digit):

Interesting list. Need to work out a value/weight range for it.

Out in the wilderness players need to learn that gold, gems, etc... can't be eaten or even traded. Spices on the otherhand are low weight/ high value items that almost any society will desire.

I know how much I like that popcorn flavoring they have in stores.

Mace, fenugreek. Of course these have different storage requirements and lives, and wildly different values, which might tell us something about your game world.

I never know how closely anyone's game world is supposed to map onto Earth history. Vanilla and paprika strike me as obviously post-Columbian, so for me that would date the list, and then prices for the 4 noble spices (cinnamon, mace, nutmeg, cloves) would provide other date info.

It would be interesting also to consider bits of animals (used as tools or medicines), cloths, technology, seeds for planting, paper etc. I'd love to drop a big bag of salt for preserving meats into a dungeon and see what the players made of it.

Nice chart--these are a neglected element, and good thoughts from Richard.

What a neat idea! I look forward to seeing it explored.

This is cool! I have a spice trader in a solo adventure anthology I'm working on. In the adventure for thieves a spice trader and a money lender get involved in the plot. Some exotic spices end up being a clue in the characters investigation. I might add some ore detail now.

I like to throw some spice in as treasure in my hex crawls and dungeons. Breaks up the coin monotony and has the potential to send players in an interesting direction.

This is really cool. Spices are an idea that would make a lot of sense as plunder objectives for opposing warbands in skirmish/war games as well. Something I'll keep in mind for my future minis games.

Hey, you've pretty much described the contents of my spice rack. :)

Love and will use it!

If my memory serves me correctly, a huge haul of spices features in King Snurre's treasure trove in G3.

Srith of the Scrolls said...

Love it. I look forward to the completed version. This is quite useful stuff.