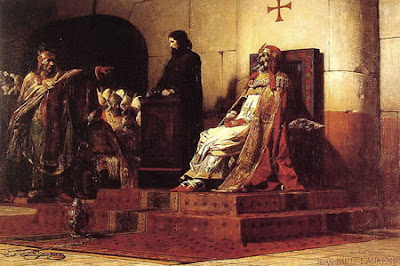 Such a fun little set of papal assassination stories, I just had to share one of them...

There's a wonderful episode of QI somewhere where they almost re-enact the trial, including the use of puppets and simulated horror...

Cool. I bet he was just upset 'cause Formosus had a cooler Pope-name than him.

Thanks for the post. Whenever I work with people coming into the Church I tell them that Catholicism is like one large extended family with a history that is both great and crazy. The bad popes make for some fun reading. Take a look at the Wikipedia post for bad popes. http://en.wikipedia.org/wiki/The_Bad_Popes

Wow, that's awesome. No many how many stories I see about the strange, freaky stuff human beings can do, I never cease to be amazed.

I don't think the "insane and mad with hate" thing is true. Stephen and Formosus were on opposite sides of a long-term partisan squabble. The point of the exhumation and trial was to discredit the bishops and whatnot whom Formosus had appointed, etc.

It was back and forth between the two sides over the course of several papal terms.

Definitely a favorite bit of history, though.

Perhaps. Those are someone else's words, not mine, though I bear some responsibility for having re-printed them without any independent research.

Mostly, I just thought that the idea of exhuming someone's body to have them posthumously stand trial was rather wacky.

"Perhaps. Those are someone else's words, not mine, though I bear some responsibility for having re-printed them without any independent research."

Doh, sorry, I didn't mean to imply otherwise. I was responding to what you quoted.

It is a fantastic bit of history. Thank you for posting it. I just think the guy you quoted, in saying the guy was nuts, really sells short how weird it was.

It is weird, and I love the pic.