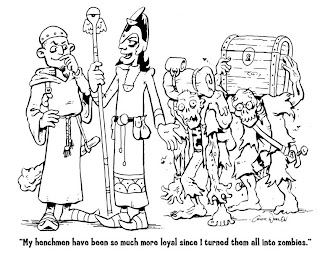 The Dungeon Crawl Classics RPG renames three of the six traditional Dungeons and Dragons attributes, keeps two, and jettisons one, replacing it with a new attribute, Luck.

I understand that DCCRPG is its' own game, and I can't expect everything I like about Dungeons and Dragons to appear in that new game, but there's something about the absence of a Charisma that is unsettling me.

Wisdom is one of the renamed attributes, and has been called Personality. Perhaps Goodman's intention is to merge Wisdom and Charisma into that new Personality attribute. However, there are no rules in the DCCRPG beta for the effects of Personality on encounter checks or the retention of henchmen or hirelings.

The only effect that Personality has is that it modifies the spell-casting power of Clerics and improves Willpower checks.

Perhaps i'm one of the few old-schoolers who promotes the use of henchmen and hirelings. To me, the inclusion of henchmen, hirelings and followers is an integral part of emulating the tales of Conan, Fafhrd and the Gray Mouser, and other classic sword and sorcery tales.
Posted by Aaron E. Steele at 3:45 PM

The beta rules are highly abbreviated, but I surprised that there was no mention of followers whatsoever. Henchmen were a major part of the playtest session in which I participated. However, that session wasn't run by Goodman himself...

That's what has me perplexed.

I get the character creation funnel, but shouldn't you be able to attract hirelings, henchmen and followers at higher levels?

No henchmen or hirelings? Then how are you suppossed to check for traps? Who is going to hold the torch or provide the human shield for your spell casters when things go pear shaped?

I guess, starting at zero level, you are the henchmen. Good catch, I consider Charisma, social interactions and followers crucial to the old-school.

For what it's worth, Goodman has gone on record saying that the beta rules don't include everything that will be in the published game, and that his plan is to produce a supplement for higher-level play at a later date.

When I read DCC I saw Wisdom as the attribute being jettisoned (pretty much a useless attribute anyway, as far as I'm concerned) and Charisma as the attribute that was renamed Personality. I guess this is just a reflection of my interpretation of Charisma as measure of strength of personality, willpower, and sense of self, which seems to match the DCC Personality attribute pretty well.

I agree that henchmen / retainers are a "core" part of the game, and those charisma-based hiring rolls and morale checks are huge fun.

I viewed personality as being a combination of charisma and wisdom, but mostly charisma. I'm sure there will be henchman/hireling rules, but in the meantime, it's not difficult at all to treat personality as charisma and use LL rules with regard to hirelings and such. I guess I don't really see any issue.