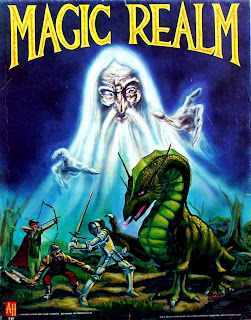 I've mentioned before that Avalon Hill's Magic Realm is the best fantasy-adventure role-playing board-game ever invented.

Magic Realm's greatest fault? An earlier set of labyrinthine, and nearly inscrutable, rules. Those rules caused most Magic Realm early-adopters to throw up their hands in frustration, relegating the game to the top shelf of the game cabinet, never to be played again.

Though the rules remain labyrinthine, they have since been cleaned up by a group of stalwart fans. But the game is now long out of print. And it's unlikely to be reprinted anytime soon, since the world has moved on from the chit and hex styled board-game.

Attempts to purchase a copy of Magic Realm are an exercise in frustration, because of the game's out-of-print and cult status. But you can obtain a free electronic version, called Realmspeak, that is a near perfect re-creation of the board-game.

The problem is, once you download Realmspeak, what do you do with it? 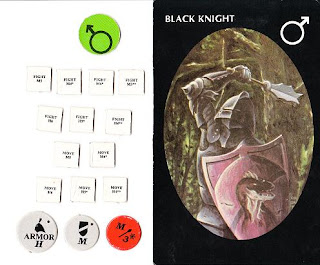 That's where video tutorials come in. Here is the first part in a series of tutorials at Bookshelf Games, this one using the Black Knight, my favorite Magic Realm character.

If you have a copy of Magic Realm, or are interested in trying Realmspeak, these videos are a good place to start, to understanding how Magic Realm works, and what you are supposed to do, with each of the Magic Realm characters.
Posted by Aaron E. Steele at 12:10 PM

Nice! I've always wanted to try this game, and nearly bought a copy on ebay once(lost the auction). Wasn't certain I'd actually get a chance to play it though, but I'll give realmspeak a look for sure.

Also, if you go to board game geek, there are tons of examples of gamers crafting their own sets.

Thanks for sharing these links!

Main thing I remember is that there was a spell called Power of the Pit which had a d6 roll for random hellish result.

@Aberrant Hive Mind ... this is one of those games where you almost need a tutor. It's pretty hard to figure out what the heck you're supposed to do with it.

@Talysman ... Power of the Pit is like the nuke of the Magic Realm world. You don't want to be anywhere near the hex tile when that spell gets cast.

I have friends who took several cracks at trying to learn Magic Realm, each time having to admit defeat. This includes guys who were familiar with Advanced Squad Leader. I just found your series and I'm not entirely certain you aren't just trolling folks by claiming this game is playable.

I may take a look at the link to the fan-revised rules. Having done something similar for Greyhawk Wars!, I can see the value of them.