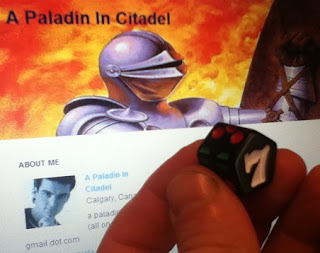 I finally broke down and picked up a d7 on my way home from work on Friday.

I visited the Sentry Box, where my inquiry about d7's was greeted with empty stares. Fortunately, after searching the counter, me and the staff found one (that's right, just one) d7, along with a d14 and d16, all in a mixed bowl of dice. I didn't purchase either the d14 and d16, as they were expensive and were un-inked crystal dice. I'm not a big fan of crystal dice.

One of the odder complaints about Dungeon Crawl Classics is unhappiness with the introduction of the new funky dice. Funky d3, d5, d7, d14, d16, d24 and d30 dice are planned additions, to be used along side the usual random generator suspects. Not sure why the complaints, other than perceptions that the funky dice are a money-grab.

Of the new dice being added to DCC, only the purchase of the d7 is really necessary. The rest are easily emulated, either by using existing dice, or by adding a control die.

The d3? Roll a d6 and divide by 2, rounding up to the next higher whole number.

You can generate most any DCC funky dice range using the existing dice and the d7. But there is one die that we still need, that DCC does not even consider a use for. The d9.

The d2, d3, d4, d5, d6, d7 and d8 are already represented, or can be emulated by rolling a single existing die. But we have no d9. Now I know you can generate a d9 range by using two d6, one as a control die and one as a d3, but it's nice to be able to roll a single die to generate a range, where possible. I was mentioning my desire for a d9 on Jeff's Gameblog, and magic pointed me to shapeways, which has a d9 on its site. 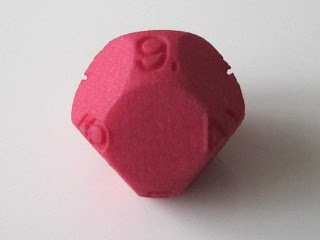 The only prohibitive aspect of this d9 is the price. I nearly swallowed my tongue when I found out the d7 at Sentry Box was $5.00. The d9 is priced at over $8.30, and that does not include shipping. When you consider the price, two d6 to emulate a d9 doesn't seem like such a bad idea.

Or they could simply use the 'normal' funky dice that are much cheaper and that gamers already have in abundance (I've gathered about 5 big coffee cans worth over the years).

The new 'Ultara Groovey' funky dice are a stupid move on Goodman's part. This isn't the economy to go and make your game that much more expensive or unattractive to potential customers.

The only die you need (in my estimation, anyways) is the d7.

The mechanics behind the d14, d16 and d24 are interesting, but i'm holding off on the purchase of those dice, at least for the time being.

Dice are like peanuts, you can't stop with just one. I remember how it wasn't long before I had enough d4's to stop an infantry advance.

Yes, but you just KNOW you're gonna need to roll 30 d4 at some point. It would be embarrassing to be unprepared for that eventuality!

And there you have it - I stopped using "control dice" and other such convoluted silliness when the first d20 numbered 1 through 20 rather than 0 through 9 came out.

When ONE zocchi dice (your example d7) costs the same as a standard set of six polyhedral dice.... Ill pass.... so will my game group; and so will a LOT of other OSR style RPG players and groups.

The new dice add NOTHING to the game.... and cost such an exhorbitant amount - it is quite obviously a transparent and cynical money grab.

simply put - I forsee DCC will have dissapointing market penetration and sales for goodman(at least when measured against goodmans hopes).

My fondest wist is that WOTC will see the light amd republish OD&D, B/X, and AD&D with modern art and clear formatting and editing. It is obvious that (subjectively speaking) 4E D&D is a relative failure (when compared to 3E/3.5E/D20 and pathfinder... and this is attested to by the in progress "yet another round of layoffs" (YAROL) at WOTC, the ascendancy of pathfinder, and the high prices 3.5 books still demand.

I think redoing and reprinting the classics would be like a license to print money for WOTC... and would relegate the DCC RPG quickly to the dustbin of history (where, frankly - it belongs)

achijusan said...
The new dice add NOTHING to the game.... and cost such an exhorbitant amount - it is quite obviously a transparent and cynical money grab.

I'm not sure I completely agree with your analysis, that the dice add nothing to the game, but you do confirm that "money-grab" is the singular complaint levelled at the new funky dice and DCC.

The DCC adventures that will accompnay their RPG look very old-school sword and sorcery.

My objection is not so much the money-grab, but the actual addition of a bunch of new dice types, which will cause a pain in the ass and slow the game down as people hunt for the right dice. Emulating the Zocchi dice will slow things down even more, especially for people who get mental blocks when they try to do arithmetic in their heads.

There are a lot of really neat features in DCC, but I have a feeling that it won't play nearly as well as it reads. With all the damn charts, twice as many dice types, and the mechanical baggage of the d20 system I wouldn't be surprised if it bogs down even worse than 4E.

Then it's just one roll.


And I have to say, emulating the funkier dice would be how I'd go. Not because of the money grab, but because I've learned to truly hate dice that aren't regular polyhedra. (I even got a bunch of "old style" 20-sided d10's.)

But that's just me.

1D8 reroll 8's is statistically equivalent to a 1d7.

Captcha word: unfean - people who are not fans of rolling control dice.

on your tablet,kindle fire,or laptop and have fun.
I know I will.

I am Magic, the designer of the D9.
I understand that the price is one of the issues with non standard dice, and I wanted to let you know that Spherical D14 and D18 are now available, at afforfable prices, through this KickStarter: http://kck.st/SSfJg0