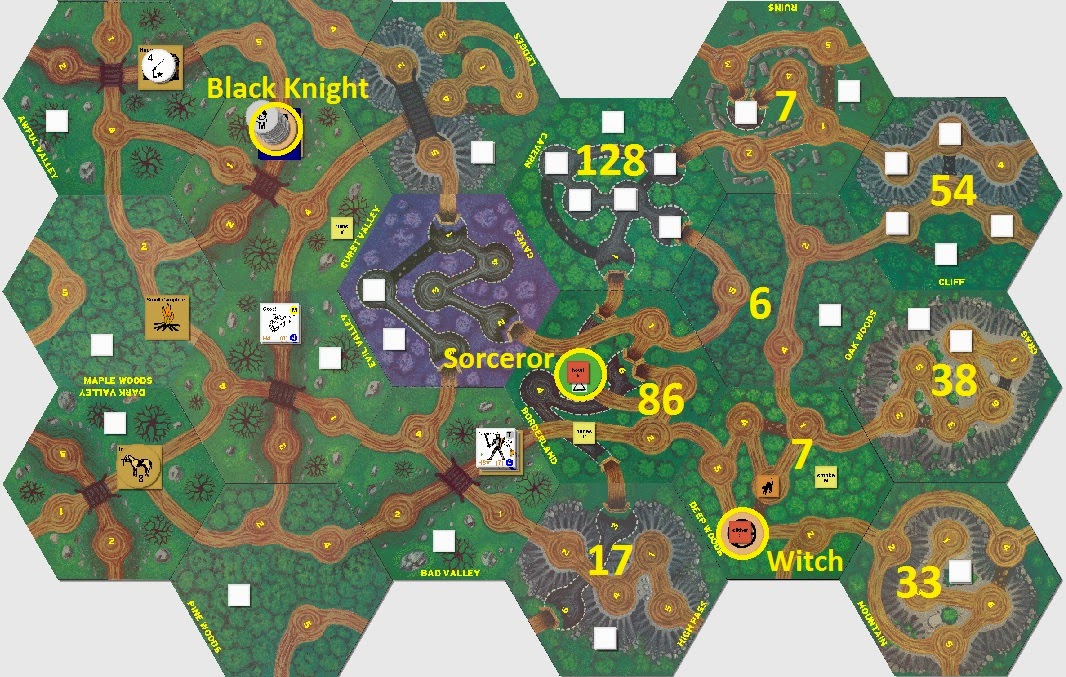 It's Day 21 of the Witch's adventures in the Magic Realm, and Purple Magic is provided throughout the Land (purple magic will automatically activate the Sorceror's Melt Into Mist spell today).

The Witch spent the first fourteen days looking for, and finally finding and absorbing the Tremendous Flying Dragon.  The next several days were spent travelling to the Deep Woods, where the Witch transformed in the Dragon and proceeded to devour the monsters waiting there.  It is important, when playing the Witch, to be patient.  Because absorbing the TFD is such a powerful strategy, she can still win the game even if it takes several weeks to find that Dragon.

As a consequence of yesterday's combat, the Witch has accumulated enough Fate and Notoriety to win the game (Players win by satisfying their initial victory conditions).  The Witch has accumulated her necessary 30 Fate and 40 Notoriety, and has earned an additional 75 and 65 of each, respectively.  Her total score (a zero is a win) is 37, because of the bonus she gets for earning points in excess of her victory requirements.  With a week to go, the Witch has time to increase that score even further.

I have added yellow numbers to the map at the top of the screen.  Having analysed the monsters that can appear during the final week, and the combination that appear together, that number represents the total estimated number of additional Fate and Notoriety points the Witch can score, if she eliminates all of the monsters that appear in the tile.

As you can see, the Cavern provides the highest potential score, at 128, but is dangerous since the Witch might have to battle two Tremendous Trolls simultaneously.  The Great Sword Goblins also appear in the Cavern, and can overwhelm and kill the Witch/Tremendous Flying Dragon.

The next most valuable tile is the Borderlands, at 86, but the Sorceror is already there, and the Black Knight may not be far behind, so the Witch will be competing with those two for monsters.

Therefore, the Witch will play it safe, and head towards the Cliff, with its 54 available points, where she will battle the monsters that are summoned there -- the Octopus, Bats, Heavy Spiders and the Imp.  Of those, the only dangerous monsters are the Heavy Spiders; the Witch will attempt to face them one at a time.  They are dangerous because Heavy Spiders can do tremendous damage, but if they employ that attack, they slow down and are easy targets for the Witch/Tremendous Flying Dragon's faster attack.

The Witch still has her workhorse and an extra black mana, so she will use all five phases to head straight towards the Cliff without resting.  If she encounters one or more monsters there, she can transform into the TFD by playing her last black mana, to transform into her permanently absorbed Dragon. 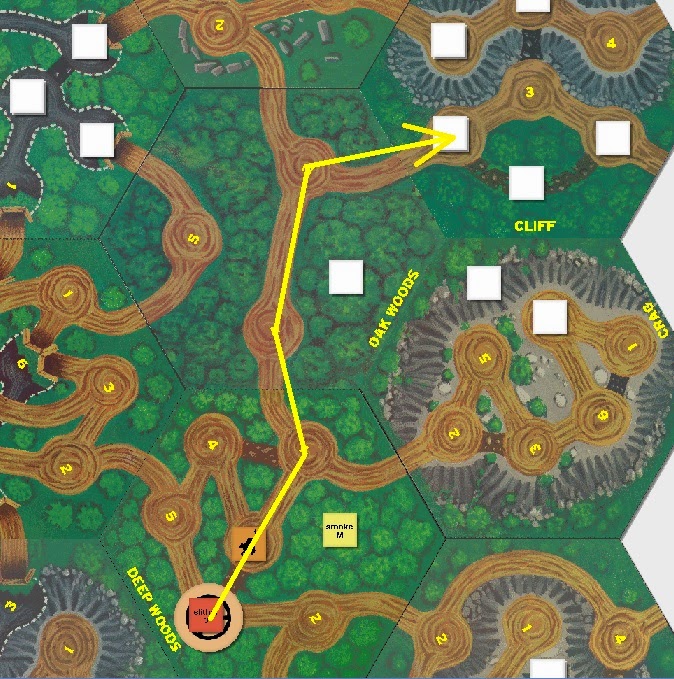 The Witch will send her familiar to search for the other secret path in the Deep Woods.

The monster die roll for Day 21 is a 5: Spiders and the Imp.  The Witch should have no trouble defeating both monsters, but she may suffer one or more curses from the Imp before the combat is finished.

The Witch's familiar moves to Deep Woods 1 and discovers the secret path.

The Witch moves five clearings to Cliff 2 and ends her turn.  A Heavy Spider and the Imp appear in her clearing, and she battles them at the end of the day. 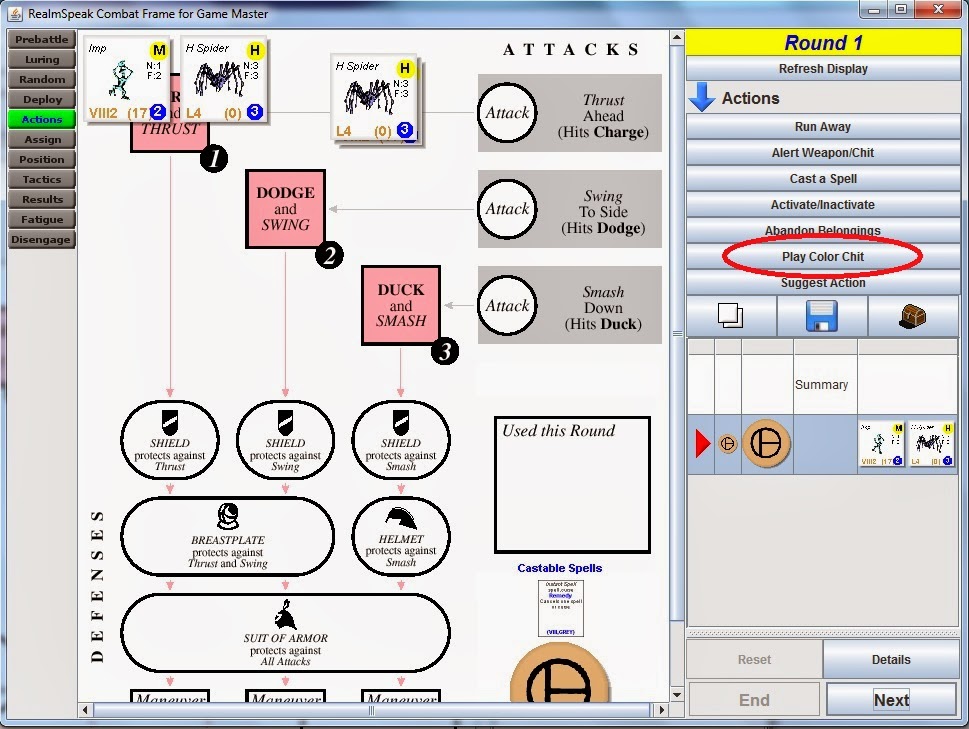 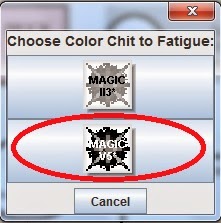 The Witch uses that black mana to transform into the Tremendous Flying Dragon. 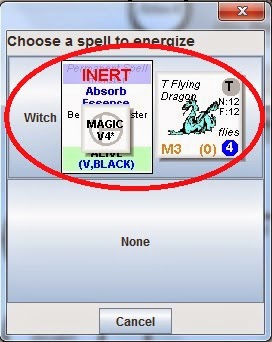 She then targets the Heavy Spider, since it can kill her with its' tremendous attack.  The Imp will no doubt cast a curse on the Witch, but the Witch has the Remedy spell, so she can cast that to remove the curse(s) later. 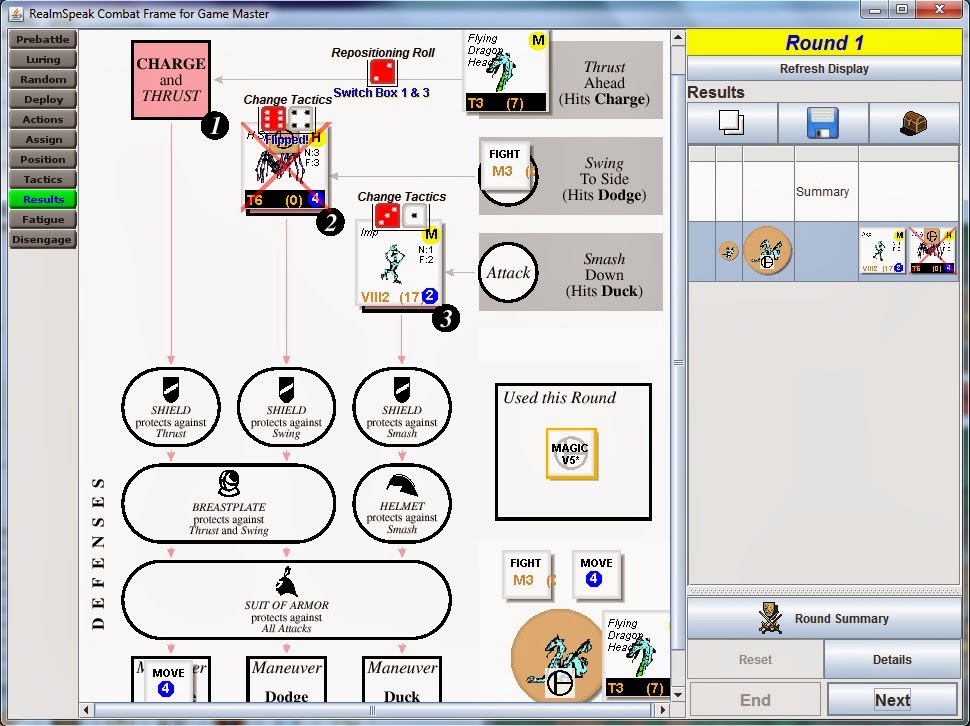 It's a good thing the Witch targeted the Heavy Spider.  It uses its tremendous attack, but the Witch/TFD attacks first, with her longer reach since it is combat round 1, killing it.  The Imp cast the "disgust" curse on the Witch this round, making the Witch's Fame worthless until she removes the curse with her Remedy spell.

During the second combat round, the Witch kills the Imp, as it flips to its non-cursing attack side and the Witch/TFD's head attack speed of 3 undercuts the Imp's move speed of 4.

Meanwhile, the Black Knight continues to loot the Guardhouse, and the Sorceror successfully hides while in mist form caused by the purple magic present today.