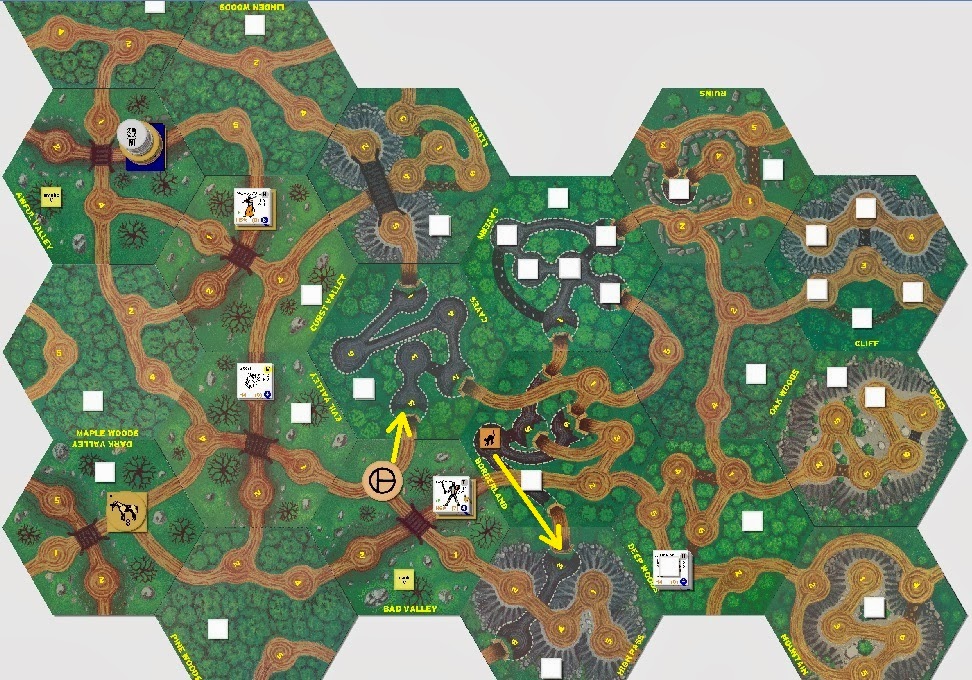 Today is Day 14 of the Witch's adventures in the Magic Realm.  It is also the end of a week, which means another kind of color magic is freely available throughout the Realm: this time, Gray magic.

The Witch commonly uses Gray and Black magic in her spellcasting, so like Day 7, this is another beneficial day for her.  In fact, part of the Witch's decision to travel by land, rather than flying to the Caves, was driven by Gray magic's availability on Day 14. 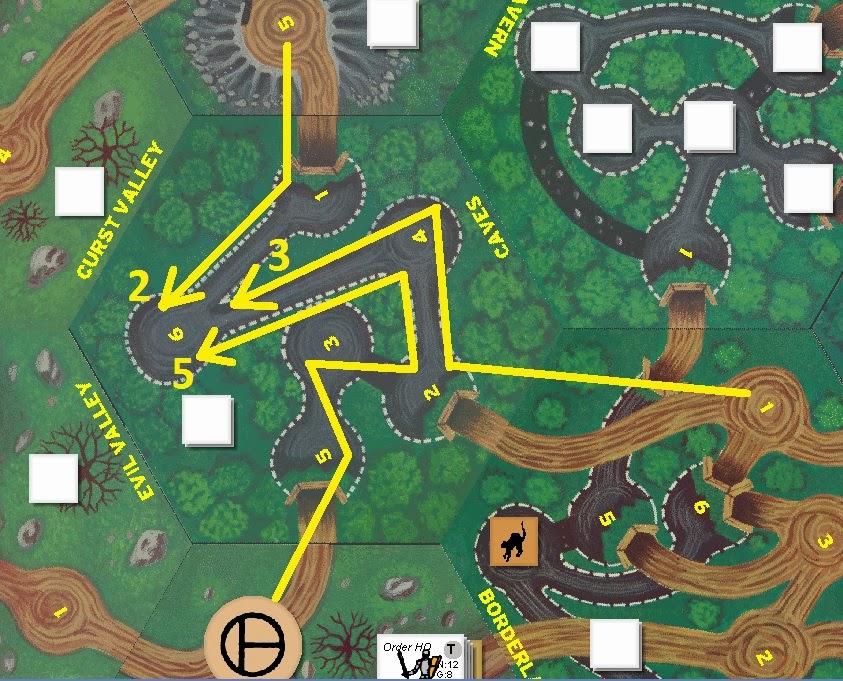 No doubt some of you may have wondered why the Witch chose to approach the Caves from the south, rather than the north or east.  Approaching the Hoard (in Caves clearing 6) from the south requires the Witch to travel through 5 cave clearings (including a secret passage between clearings 3 and 2), while the eastern approach requires only 3 clearings, and the northern approach, only 2.

Travel in the Magic Realm is a straightforward activity, when players select martial characters.  The map is the map.  The addition of crafty spellcasters adds another interesting wrinkle to the travelling portion of the game, beyond the mere casting of spells.  Spellcasters can both cast spells, and enchant Magic Realm tiles.  Enchanting Magic Realm tiles causes roads and passages to rearrange, in addition to supplying specific types of mana to spellcasters within their boundaries.

The Witch's plan for Day 14 is to enter and enchant the Caves, flipping the Magic Realm Caves tile from the image on the left to the image on the right.  In doing so, she will rearrange the Caves passages so that she can travel directly from Caves clearing 5 to clearing 6 (site of the Hoard), rather than following the otherwise circuitous route laid out in the non-enchanted Caves tile.

The enchanting of map tiles is one of the more unfathomable facets of Magic Realm gameplay.  For many years, I avoided playing Magic Realm spellcasters because of the non-intuitive operation of map tile enchanting.  I say non-intuitive, because, when I first began playing, I intuited that a spellcaster needed to have color chits, the identical color as was supplied on the reverse of a tile, in order to enchant that tile.  While it made intuitive sense that only Gray spellcasters could enchant a gray tile, only Gold spellcasters could enchant a gold tile, and so on, that is not how tile enchantments operate. 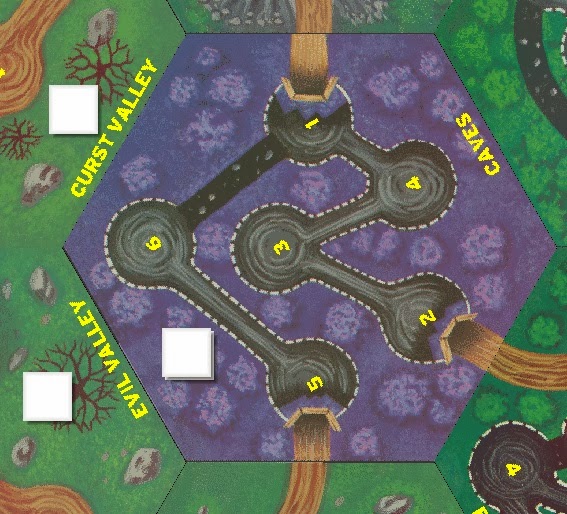 Grasping this unusual Magic Realm game feature permitted me to finally enjoy playing and getting maximum use of spellcasters in Magic Realm.  A side benefit of enchanting a tile is that, for some spellcasters, they will have free access to certain colored mana to power their spells.  Once the Witch enchants the Caves tile, the Sorceror will have unlimited purple mana to power her spells while in the Caves.  But for the Witch, that is not the purpose of enchanting the Caves.  The Witch merely wants improved access to the Hoard, with a convenient exit to the Bad Valley tile, should she encounter trouble with the Caves' Goblins.

In addition, since it is Day 14, and Gray magic is supplied throughout the Realm, the Witch will only need to use one Type II (Gray) magic chit to enchant the Caves, instead of a pair, since she can use the free Gray magic supplied on Day 14 in substitution of a Gray mana chit she would otherwise be required to employ.

We don't want the monster roll to be a 1,2 or 3, as a roll of 1 or 2 will send some of the monsters in the Deep Woods back to the set-up chart, and 3 will summon Goblins to the Caves, necessitating the use of the Witch's broomstick to flee.

The Day 4 monster die roll is a 4, Giants and Trolls once again.  Since it is the end of a week, any monsters and denizens on row 4, who have been killed or are prowling on the board, return to the set-up chart.  Since none from row 4 were prowling or dead, nothing happens. 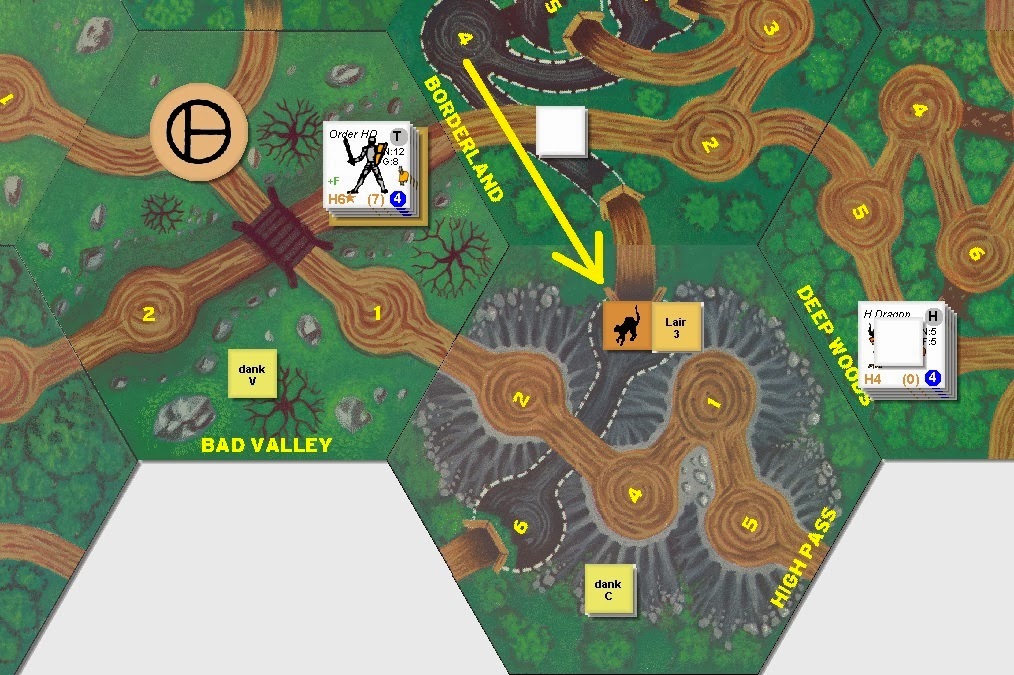 The Witch's familiar moves to High Pass 3 and successfully peers, finding evidence of the Dragon's Lair in clearing 3 and the Dank C chit, which summons Serpents. 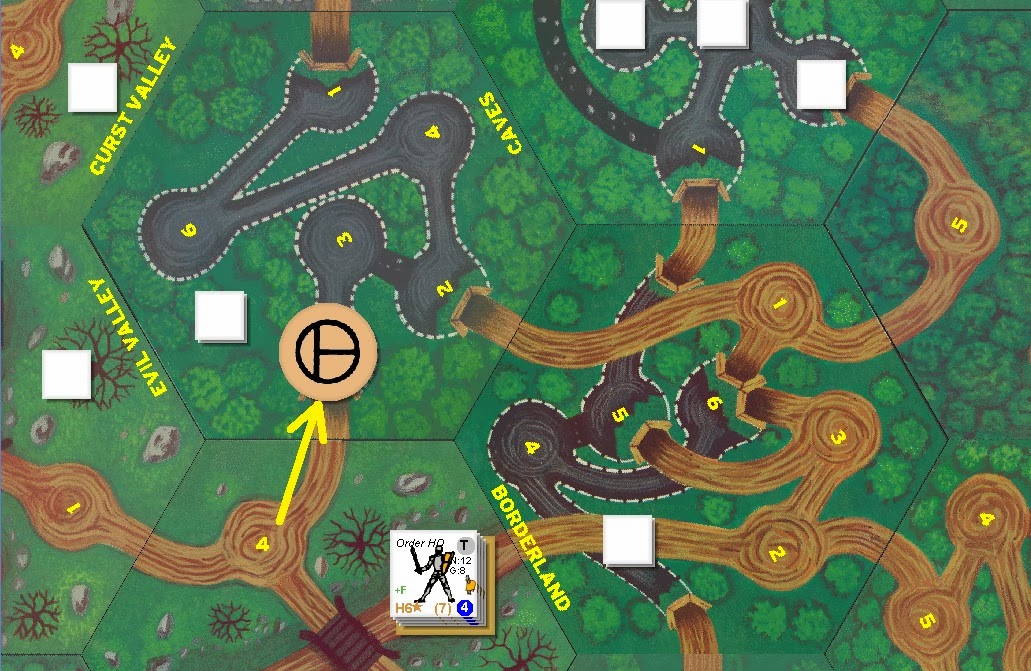 The Witch uses her workhorse to enter Caves clearing 5, with the workhorse immediately deactivated upon entering.  The Witch then uses her two Enchant activities to enchant the Caves. 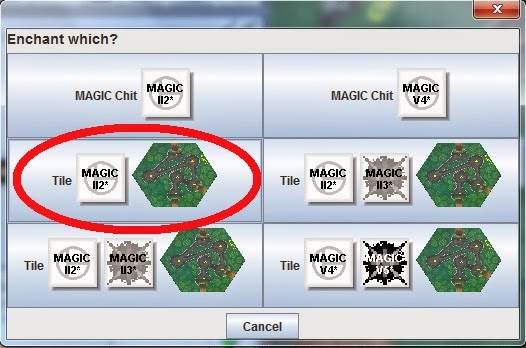 During the second Enchant activity, the Witch can choose to either enchant a magic chit or a tile.  She chooses the Caves tile, and because Gray magic is already available on Day 14, she does not need a second gray magic mana chit to power the tile enchantment. 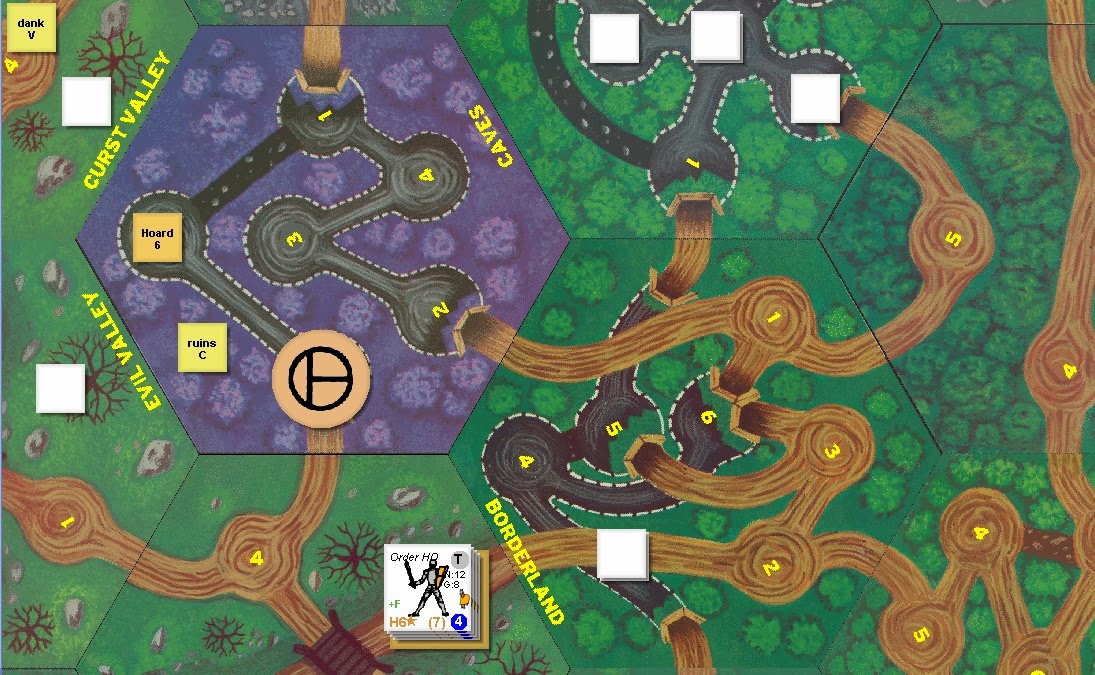 The Witch ends Day 14, unhidden in the now enchanted Caves tile.  Since the monster roll was 4, no monsters appear in the Caves (the Dragon would appear on a roll of 1, and the Goblins on a roll of 3).

The Black Knight and the Sorceror  continue to loot the House, but are quite interested to see the Dragon's Hoard revealed on the board.