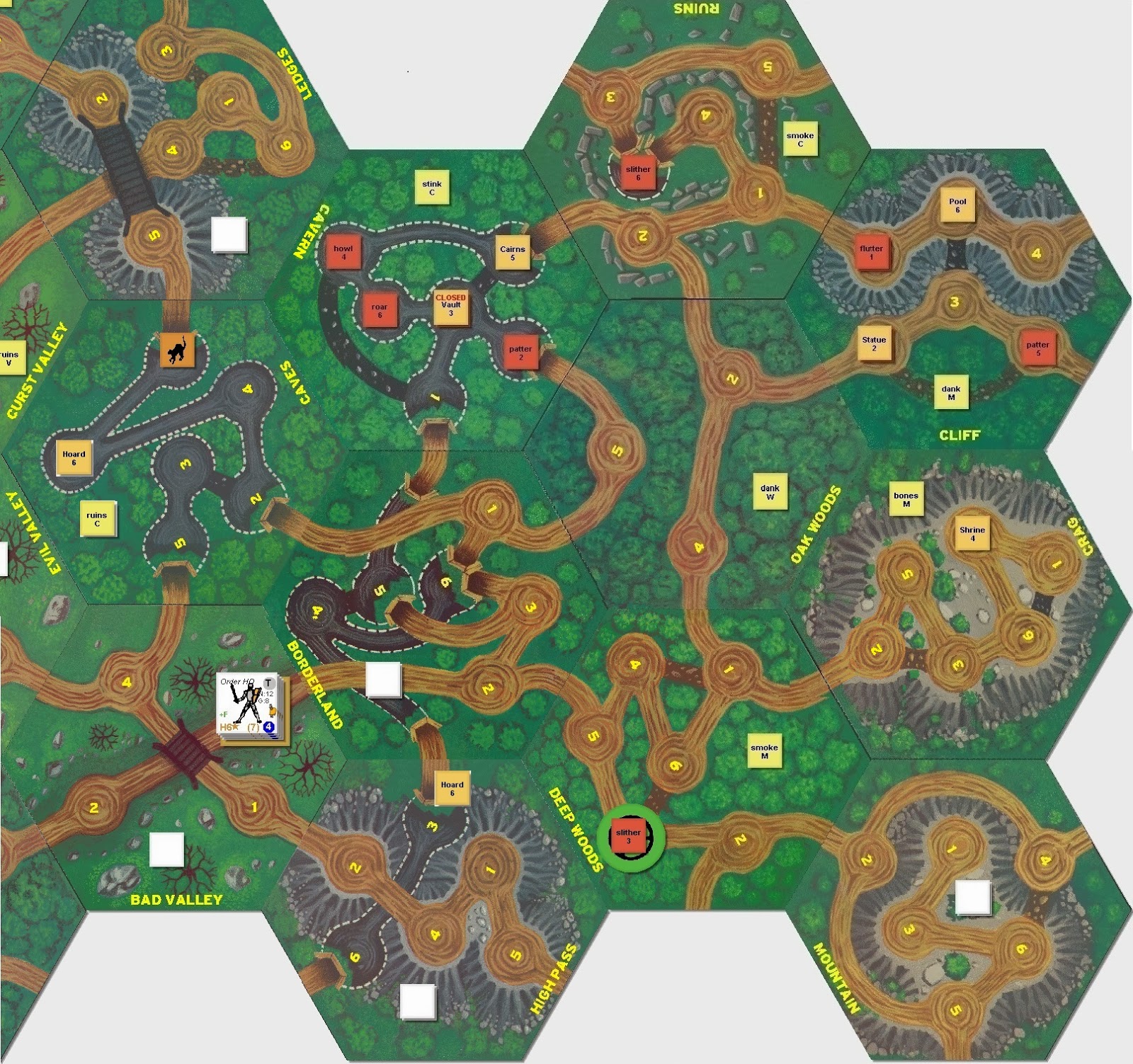 Day 10 was an important one for the Witch.  Her familiar found clues confirming that the Dragon's Hoard lies in the Caves, as well as a clan of Goblins.

The Hoard is guarded by the Tremendous Flying Dragon, perhaps the most powerful monster in the Magic Realm.  The Witch wants to locate that Dragon and absorb its essence, thereby allowing her to transform into the Dragon and defeat nearly every other monster in the game, as well as many of the natives.

The Witch ended Day 10 hidden in the Deep Woods, surrounded by three Heavy Dragons and Two Heavy Serpents, oblivious to her presence.  If we are lucky, these monsters will still be here once we absorb the Tremendous Dragon's essence.  Returning and defeating all of these monsters, during the same day, will net the Witch 72 fame and 72 notoriety, enough to satisfy her victory conditions, and then some.  The reason for this is that every monster defeated during the same day provides their fame and notoriety times the order number in which they were defeated.  So monster number one is worth one times their fame and notoriety, the second is worth twice, the third is worth thrice, and so on.  All five monsters, if defeated in left-to-right order, would be worth (1x4) + (2x4) + (3x5) + (4x5) + (5x5) = 72 fame/notoriety. 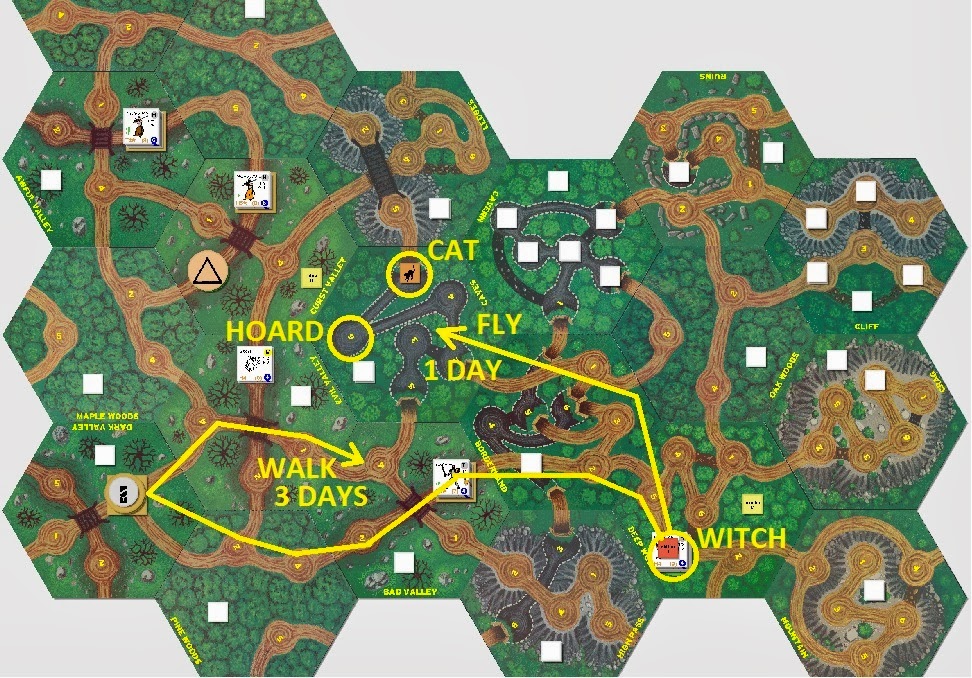 It's tempting to use the broomstick.  If the Witch uses the broomstick and lands in the Caves, and the Goblins show up, they will immediately appear in the clearing in which she lands.  Since the Witch will have already exhausted her broomstick spell, she will not be able to fly from the Goblins, and they will kill her.  Of course, the Witch has yet to score any fame or notoriety, so we will not lose any accumulations if she dies.  Alternatively, she could fly to the Bad Valley, but there is a 50% chance that she will land at the Chapel or in clearing 2, both of which she can reach today, just by walking.

The advantage to walking is that the Witch will pass through the Inn.

There are 3 treasures still at the Inn, including two workhorses.  The Witch can do two searches at the Inn and still reach the Caves' southern entrance in three days.  There is a 44% chance (25% each search)  that the Witch will get one of those three treasures by performing two search actions.  And a Workhorse provides an extra move action each day, which is handy for getting around the Magic Realm quickly.

The Witch will save her broomstick for a quick exit if she needs one, and walk to the Caves' southern entrance.  The Witch's familiar has done it's job: we will send it off to find some secret paths for us, in case we need them later.

Day 11's monster die roll is a 4: Giants and Trolls.  We will end our turn in a Valley, so we will not be bothered by summoned monsters today.

Both the Witch and the cat move to their intended destinations and end Day 11 uneventfully.

Meanwhile, the Sorceror and Black Knight travel past the Guardhouse, to the House, trade with and then kill the Soldiers lounging there, with the Sorceror eliminating two of the four with her fiery blast before melting into mist, and the Black Knight mopping up the survivors, suffering a single fatigue in the process.  The treacherous duo have now eliminated four native groups.