Victory In The Magic Realm 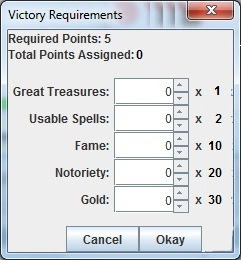 As I mentioned earlier, winning in Avalon Hill's Magic Realm comes from meeting or exceeding your self-imposed victory conditions.

The related process of selecting victory conditions is performed at the start of the game. Each player assigns five points to any combination of Great Treasures, Usable Spells, Fame, Notoriety and Gold.

At the end of the game, you measure your performance against those self-imposed victory requirements.

When I play the Black Knight, for example, I will either assign 1 point to Fame, 2 to Notoriety and 2 to Gold (if I intend to combat native groups) or 3 Fame and 2 Notoriety (if my goal is killing monsters). In the case of 3 Fame and 2 Notoriety, I would need to collect 3x10=30 fame points and 2x20=40 notoriety points to achieve victory.

It is critical that you play Magic Realm in keeping with your self-imposed victory conditions. While it's tempting to be opportunistic, straying from your original plan will not result in victory. For example, if the Sorceror player selects Fame and Notoriety as his only victory conditions, he should resist the urge to search for usable spells, even if treasures come into his possession that would yield spells.