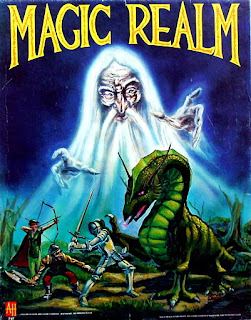 As many of you are aware, Avalon Hill's Magic Realm is one of my favorite old-school fantasy RPG boardgames. It is played without a referee, yet has sufficient depth to satisfy your role-playing itch. 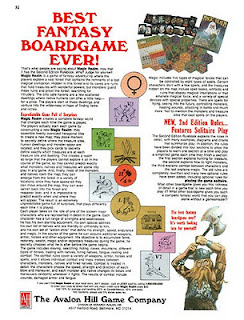 We played several games of Magic Realm over the holidays, and were never disappointed with the game play. Hopefully more games will be played in 2012.

For those of you who cannot find a tabletop version of Magic Realm, the free, electronic java implementation, called Realmspeak, is available here.

One of Magic Realm's unique features is the use of action chits to govern what tasks each of the 16 unique characters can perform. 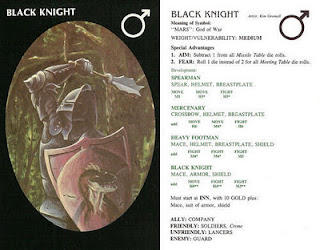 Morritz Eggert of the Westpark Gamers has this to say about Magic Realm's action chits:

"Characters move, fight, cast spells and perform other tasks in Magic Realm utilizing their action chits. Below are the Black Knight's move and fight action chits. 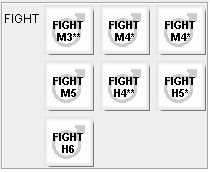 Each action chit includes a speed number, with 1 being the fastest action, 2 being the next fastest, and 8 being the slowest.

Depending on the character you play, some action chits will also have one or more effort stars (* or **), limiting their use, or forcing you to suffer fatigue (rather than wounds) as you overstrain yourself by playing action chits with effort stars.

Playing a combination of action chits that, between them, includes a total of two effort stars, results in one of your twelve action chits becoming fatigued, and therefore taken out of play until your character rests.

The four-tier system of light, medium, heavy and tremendous actions corresponds with everything you do in the game, and is actually very logical and easily understood.

For example, to wear heavy armour, you need to play a heavy move chit, otherwise you won't be able to wear it. Easy, isn't it?

Actually the game is far from obscure or difficult once you play it, and there are no myriad exceptions or special rules like in Advanced Squad Leader.

The best way to learn Magic Realm is have someone teach it to you. I have yet to find somebody who finds the game too complicated when taught to them, because it actually plays very fluidly and logically.

Yes, if you include all advanced and optional rules, you will have a lot to read, but the full game also simulates an absolutely complete and logical fantasy world: seasons; days and nights; weather; warring factions of natives that act realistically, buy and sell items, can be hired, and move around;

monsters that have their own life;

players that can interact with each other in complicated ways, each with completely different and interesting goals; and a fully fledged magic system that is by far the most interesting of any Fantasy RPG's.

In short, the world of Magic Realm really lives, in the best sense of the word, with a flawless internal logic to it that is far more realistic than the event-card driven games of the "Talisman" school, but can still surprise you at any moment.

Although I have played the game (really often) I still have yet to use every possible spell combination or every available magic item,

so many possibilities does this game offer.

In addition, each of the 16 available characters not only has a completely different set of movement, magic and battle chits, but also has 2 special abilities, which makes each character totally unique and forces players to develop different strategies for each of them."
Posted by Aaron E. Steele at 7:21 PM

Maybe you could do a tutorial series? Or, perhaps, an rpg translation? I mean, clearly, you are obsessed. ;)

There's a great video series that demonstrates the game play. I will provide a linky.

Very cool. A friend of mine had it in high school, but we could never muster sufficient time/energy to figure it out (it was easier to just go play D&D instead).

I'll have to check out the videos.

The early rulebooks made it nearly impossible to comprehend the rules. That has been fixed in the most recent rulebook version, but having someone else teach you is still the best method.

i finally there my (probably first printing) out a few years ago. I wasted many hours / days / weeks trying to comprehend the uncomprehendable off and on through out my college years trying to figure it out.

Still, I's love to hear about your success with it. I've never tried so hard to play something that I never actually played.

Once you figure it out, you'll absolutely adore this game. The figuring is the toughest part (it took me a long time as well).

After spending an entire convention slogging through getting the hang of Dune, I took one look at the rulebook for this and just started crying.

LOL. I think the rulebook weighs in at over 100 pages and features the classic wargaming rules format that was so prevalent in the 1970's. You're best served by having someone teach you the game rather than trying to muddle through it yourself. Even the much improved and re-written 3rd Edition rules are arcane.

Magic Realm rules & was my avenue back into D&D... I learned w/ the notorious 1st edition rules, which I actually prefer the brevity of, though a highlighter is a must if you dont play often...

Those were notorious rules. I have the first, second and third edition rules. There is also an eight-page primer that is helpful for new players.

I had this game as a youngster and had so much fun with it. I'm sure we didn't play it right. But it was very cool. And the various game pieces just LOOK cool.

I tried getting it from Ebay last year but I decided I didn't want to pay over $100 for it.

Glad you're having fun with it.

Considering you can get the electronic version for free, $100 seems a little exhorbitant. You can also build your own game, if you go to Boardgamegeek there are links to the files.

I feel like I have a pretty good handle on the rules over the years I've played off and on (even though using 1st ed), but the main think that hangs me up is battle when you have hirelings/allies, plus their horses, etc. But Richard Hamblen in a genius.

I like the electronic Magic Realm implementation because it takes care of all of the arcane rules surrounding combats involving hirelings and hired leaders. Like deploying multiple hirelings against a single enemy.

I posted a thread on this i the general section on dragonsfoot, pop over and post a link if you'd like.