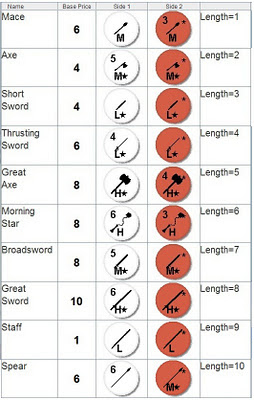 In Avalon Hill's Magic Realm, there are a range of weapons available to the characters.

Each weapon's weight corresponds to both the strength required to wield it, and the amount of damage the weapon inflicts. Characters can only wield weapons if they can play fight and move chits of the same weight level or higher.

In addition, a weapon can have a "sharpness star" (a five-pointed star beside the weapon's weight) signifying that the weapon does the next higher level of damage.

Armor offers partial protection from weapons that do the same or less damage than the armor's rating, and negates the sharpness star of an attacking weapon.

Characters can "overswing" their weapon, by playing a fight chit at a level higher that the weapon's weight.

Weapons have various attack speeds. Generally, the fastest attack speed is 2, while the slowest is 6.

Each weapon in Magic Realm has its own advantages and disadvantages. Let's have a look at each weapon to see what I mean.

First up is the lowly mace, the signature weapon of the Black Knight. With a length of 1, this weapon is the last to strike during the first round of combat (because longer weapons strike first during round one).

The mace is good for something, however. With a speed of 3, when alerted (red-side up), the mace is a fast weapon, in combat rounds after the first. With the mace's superior speed, weilding the mace allows a character to quickly and easily dispense with heavy dragons, heavy trolls, the guards, the patrol, and other human-sized denizens and monsters.

Medium and heavy monsters and denizens have little or no treasure. However, they are sources of fame and notoriety, two potential routes to victory in Magic Realm.

Next up, the axe. With a length of 2, the axe hits before the mace in round one. The axe inflicts heavy damage (medium damage plus a "sharpness star", boosting the weapon to heavy damage) and can inflict tremendous damage when overswung with a heavy or tremendous fight chit. That amount of damage is sufficient to eliminate unarmored tremendous monsters like the giants, spiders, and demons.

However, this weapon is useless against the tremendous armored monsters, who also guard the largest treasure hoards.

The axe is slower than the mace, with a speed of 5 when unalerted (white-side up).

Unfortunately, the tremendous monsters threatened by this weapon either have no treasure (the giants) or have very fast attack and move speeds (spiders and demons). That means your character may be killed before the axe can be brought to bear.

The shortsword has a length of 3. Inflicting medium damage (light damage plus a sharpness star, boosting the weapon to medium damage), the swortsword can also do heavy damage when overswung with a medium, heavy or tremendous fight chit. The Amazon begins the game with this weapon.

The shortsword is useful against other unarmored characters, medium denizens, the heavy spiders and the goblins, but is an inferior weapon when it comes to other monster hunting.

The thrusting sword is the Swordsman's weapon-of-choice.

With a length of 4, and a speed of 4 when unalerted, the thrusting sword is both longer, and slower, than the shortsword. That slower weapon speed is not usually a problem for the Swordsman, as he invariably springs from hiding, weapon alerted, to slay his opponent.

Other than being longer and slower, the thrusting sword suffers from the same malady as the shortsword. It is inferior for anything other than killing other unarmored characters, medium denizens, spiders and goblins.

The Great Axe is the favoured weapon of the Dwarf and Berserker. When the Great Axe is played in combination with those character's tremendous fight chits, they can slay any monster in the Magic Realm. As long as they hit the monster before it eats them.

This weapon is useless to the medium and light characters, as they are unable to wield or overswing it.

The morningstar is a terrific weapon for the heavy characters, like the White Knight, Berserker, Dwarf. With a length of 6, and an alerted speed of 3, this weapon, when played with a tremendous fight chit, can make quick work of all monsters in the Magic Realm.

The broadsword and greatsword are vary similar weapons.

The greatsword is a little slower, a little longer, and does a higher level of damage.

Like the axe, the broadsword is useless against armored tremendous monsters. Not so the greatsword. When overswung, the greatsword can finish off any monster, but as mentioned earlier, it is slow when unalerted, and even when alerted you must rely on the fight speed of your character.

Other than it's length of 9, there is little to commend regarding the staff, which both the Wizard and the Pilgrim start with.

Like the shortsword, the staff need not be alerted. The speed of this weapon depends entirely on the skill of the wielder.

Both the Wizard and the Pilgrim are relatively proficient with the staff, but they move slowly and are therefore outmatched when faced with multiple opponents, which is usually the case with denizens that are felled by medium damage.

We come, at last, to the spear. With a length of 10, only the bow and crossbow offer more reach in round one.

An M* weapon, the spear is great for impaling your enemies at a distance. And it can be wielded by the faster medium characters to great advantage in later combat rounds.

But the spear has a unique disadvantage: unlike every other weapon, the spear does no damage when unalerted. Therefore, it is critical that the character wielding this weapon ensure they have a way of readying their spear every turn.
Posted by Aaron E. Steele at 1:20 AM

Neat system. Thank you for sharing it withus.

You're welcome, and happy new year to you as well!

Glad to see this series begin.

Interesting, especially to one such as I who has spilt much intellectual blood trying to come up with reasons to use different weapons in Ye Auld Game. It does seem more complex than I would use, but I wouldn't expect less from MR. :)

Since they have Base Prices listed, does that mean that you can buy additional weapons during the game? Can the Black Knight, for example, acquire a greatsword and use that vs. monsters, while saving his mace for other players?

It harkens back to the old-school of combat. Have a look at Chainmail and you will start thinking this is a very clean implementation, compared to the Chainmail rules.

Yes, all of the standard weapons are available for purchase. But you can't walk in to a shop and pick the weapon and armor of your choice. Different NPC's have different arms and armor available for sale.

The woodsfolk have bows for sale.

The guardsmen have a stash of medium weapons.

The patrol have some extra pieces of armor.

The rogues have workhorses.

In Magic Realm, you have different relationships with different groups. You might be allies with the mercenary company, but enemies with the knights of the order.

So it would be easy to buy something from the company, but the order would refuse to sell you anything.

That's what makes the game so interesting. Sometimes you need to team up with another player, who is friends with the order, so they can buy that heavy morningstar you want, since the order is more likely to kill you than trade with you.