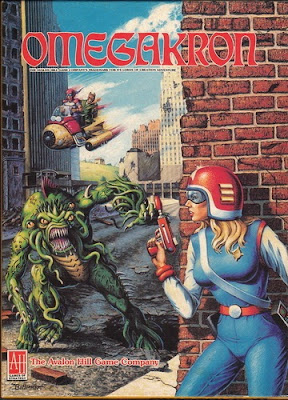 In addition to editing the 1981 Dungeons and Dragons Basic Set, Tom Moldvay also designed the under-appreciated and long out-of-print Lords Of Creation role-playing game, an RPG that emulates the World Of Tiers universe of Phillip Jose Farmer.

Published by Avalon Hill back in 1983, Lords Of Creation allowed characters to advance from basic human, all the way up to "lord of creation", beings who possess the power to create, and become lords of, pocket universes of their own.

The Lords Of Creation RPG sold poorly, and the planned fourth and fifth pre-packaged adventures for LOC RPG never saw the light of day, although the first three adventures were released: The Horn Of Roland; The Yeti Sanction; and Omegakron.

The third adventure, Omegakron, is set in the ruins of Akron, Ohio; a gamma-world-like setting, several hundred years after a devastating global nuclear and biological war. 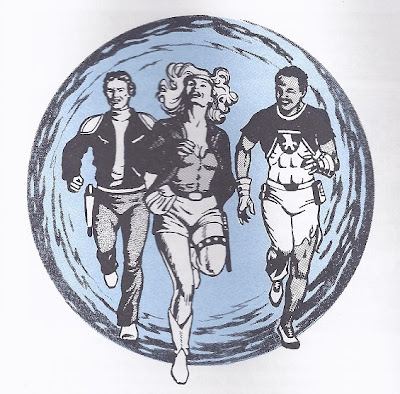 The player characters are sent to Omegakron by the mysterious Time Adjusters, who through some unknown power, have been blocked from accessing this alternative timeline themselves, thus precipitating the enlistment of the adventurers.

Here is the first of two Omegakron examples of how Tom Moldvay "gets" old-school:

During the Omegakron adventure, the player characters join the security forces of Akros, a bastion of civilization in the surrounding sea of chaos.

The characters discover that a saboteur has planted bomb aboard the Akros flying city, but the saboteur blows himself up, along with three other suspects, before he can be revealed and the location of the bomb uncovered. The GM hands the players a single page handout containing the police interview notes of each of the suspects , and the players must determine which of the four suspects is lying, thus revealing the identity of the dead saboteur and by extension the location of the bomb, before it explodes.

Tom Moldvay has this to say about this player-skill test:

"This particular encounter was designed to test the reasoning powers of the PLAYERS (emphasis mine), not the skills or powers of the characters. The bomber is the one person among the suspects who is lying. By comparing the statements, it is possible to deduce logically which person is lying, and which people are telling the truth. If the players can deduce who is lying inside of 5 minutes REAL TIME (emphasis mine) give each of their characters 200 xp. For each minute beyond 5 minutes, deduct 10 xp. The players should know in advance that they are being timed (since "real time" does not usually matter in an adventure)."

Incidentally, here are two reminiscences of Lords Of Creation, from the RPG.net website:

Yes, this was an awesome game and still is. I ran it for years and everyone had a lot of fun. I bought the Horn of Roland, and Yeti Sanction, and Omegakron, but never could find the other two adventures, Mines of Voria and Towers of Illium, not sure they ever published them. It was chaotic, but the game system is simple and easy to learn and allows characters to feel like they are really making progress with every adventure as their stats rise. Better, from a game master's point of view it allowed me to send them anyplace I could imagine, favourite book worlds, far flung galaxies, strange new dimensions, the beginning of history, ANYWHERE, and I did:)I sent them to medieval France, to many alternate universes ( like the old Sliders series I enjoyed). I shrunk them down to microscopic size and they hung around in the microverse where they discovered the remains of a dying Lord of Creation and his mad invention. I turned them all into cats for one adventure when they angered one of the Animal Lords (from the Book of Foes). They even helped the lost prince of faerie reclaim his throne, the battle being fought on the streets of New York in the late 1800s. They spent a lot of time in the future too (lots of old Dr Who inspiration here). All in all a thoroughly enjoyable game that I still own. Heck I may see if I can get another game started:) Thanks for sharing your experiences, it brought back a lot of good memories. 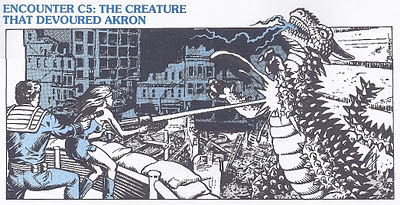 Ah yes, good ol' Lords of Creation. I bought the game, ran my first adventure and suddenly it was The Next Big Thing™ in our gaming group. Got all the adventures for it too, and still have all of it.This game was a total blast. Fortunately my friends also picked up copies so I could play as a PC as well. By the time we stopped playing all of our characters were Lords of Creation. We played for about 3 or 4 years in the late 80's as I recall.We had all kinds of bizarre adventures. One that I ran sticks out in my mind: I had the PCs arrive on a huge starship that was hurtling through interstellar space. Most of the humans onboard had been killed off by the rogue AI ship computer by using various models of killer robots. They eventually discovered that the ship was headed straight for Earth, and so had to find a way to destroy either the AI (and thus saving the few remaining humans), or destroy the entire ship. They tried to take out the AI but failed, and instead destroyed the ship (by making the "reactor core" go critical or some such, I forget exactly), and barely made it out in time. It was a real cliffhanger!On an adventure that a friend of mine ran, my PC aquired a unique weapon called The Voidal Sword™, a sword hilt with a "blade" consisting of the total absence of everything, a void in the multiverse as it were. It could cut though anything, anything at all... there was no defense against it. The next adventure was run by another friend and Romerac Elerion showed up and took it from me. Well, the original GM didn't like that and so the next adventure after that Romerac showed up again and gave it back... apparently he was just borrowing it :p My PC had that sword for the rest of his career, all the way up to Lord of Creation. Yeah, go ahead and try and take from him, I dare you :D We created an entire mythology around this game, added some powers, and all kinds of additional weaponry and artifacts. We eventually tired of it and moved on to GURPS. But man, what a blast we had! Good times.Also, I really like the old school black and white art in the rule book and Book of Foes, back when showing a little flesh just wasn't really an issue, you know what I mean? It's like after that, the roleplaying industry got all "PC" and could no longer show the dreaded boobie :eek: If you can find a copy of this game, I heartily recommend picking it up. There's nothing else quite like it. 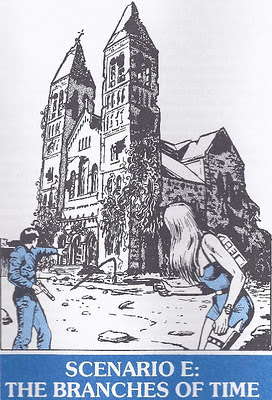 So did Dave Billman do all the interior art as well as the cover?

This is the second Moldvay-related post I've read today. I love Tom's work and have been publishing a Moldvay era D&D hex crawl in my zine for the past few months. Inspired by your post, I just picked up two modules for Lords of Creation to go with my boxed set.

Time to give this forgotten gem so well-deserved attention.