Natives Of The Magic Realm

Monsters are not the only denizens of the Magic Realm. Natives, the human survivors of a shattered kingdom, also roam the land, helping and hindering those adventurers who seek to loot the lost treasures of a once-mighty civilization. 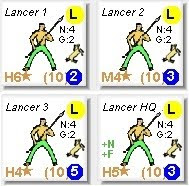 There are 13 individuals and groups the adventurers can meet and interact with in the Magic Realm. They are the rogues and mercenaries, lancers and soldiers, woodsfolk and royal guards, saracens and knights, patrol, scholar, shaman, warlock and crone.

In addition, there are two groups of travellers, looking to hire reliable escorts to deliver them to the Chapel and the Inn, respectively.

Each adventurer has a prior relationship with the various native groups. For example, the black knight is allied with the mercenary company, and is an enemy of the royal guard. The game rules do not explain the source of those prior relationships. Thus, it is left to our imaginations to fill in the gaps: for example, that the royal guard blames the black knight, the former leader of the mercenary company, for the death of the king.

Like the monsters of the Magic Realm, the Natives can be battled. But they can also be traded with and hired. Some will even join you in grand campaigns, such as eliminating the forces of Law, or ridding the land of a dragon infestation. 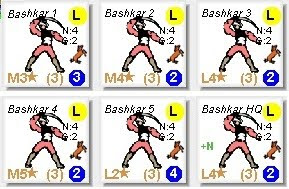 Most of the natives can suffer only light or medium damage before being dispatched. But despite their combat vulnerabilities, none of the native groups are a push-over. Even the black knight, with his reputation, prowess and predilection for betrayal, must be cautious when confronting the native groups.

One of the "standard openings" of Magic Realm, is for several adventurers to gang up on the rogues during day one. But care must be taken to ensure that the most dangerous rogues (rogues 1, 2 and 4) are eliminated first, otherwise it can turn into a bloodbath for the adventurers.

Of course, there are some natives that you really should avoid tangling with. The order would be found at the top of the list. Not only must you inflict tremendous harm (through their armor) to defeat them, but each knight rides a warhorse similarly protected. And since you must dispatch the mount before you can attempt to kill the rider, you must effectively kill each knight twice.