Actual Play Report From The Belly Of The Beast 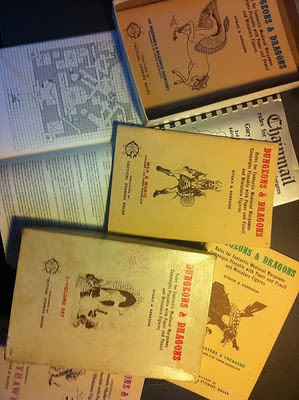 Every so often, it's valuable to visit the belly of the beast, to see what is being digested.

With the secret play-testing of an alpha-version of 5E still fresh in his mind, one blogger on the WOTC site decided to take a spin with Original Dungeons and Dragons. His OD&D play reports can be found here, on his WOTC blog.

I thought that some of this blogger's comments were worth reprinting here:

"We ran out of time [with OD&D] at this point. I asked the players what they wanted to do. Move on to the blue box, for the second version of AD&D? No way, they said. Both women said [OD&D] was the most fun they had ever had with D&D! The optimizers, used to crunching lots of numbers? These guys also wanted to keep playing and experimenting. These are guys that, before the session, said on their podcast "I expect to not enjoy the game at all". They were amazed by how great a time they had. So, yeah, more White Box this week! After that, my hope is that we can continue to climb the version and edition ladder.

We had gone from expecting to just ridicule OD&D to actually having a lot of respect for how D&D started. More incredibly, we wanted to play more. Some of the playtesters have been allowed to share that they see the versions of old in D&D Next. And they are having a lot of fun."
Posted by Aaron E. Steele at 12:36 PM

I'm glad to see the old ways getting some love. I hope the powers that be are listening...

"Now, let's be realistic. At the end of the day, [WotC] should also create the game they want to publish. They need to be passionate about their game."

It seems a little too PC of him to mention "expecting to just ridicule OD&D to actually having a lot of respect for how D&D started."

Ready to sing Kumbaya, anyone?

Maybe that's harsh. I can be too cynical at times. I do believe WotC could make good on their promises. I just hope after all of this playtesting and feedback, some of it may actually be put into the final product.

But, at the end of the day, it is really THEIR game afterall.

I ran a bit of the White Box for Crazy Mrs Rotwang!, but I'm not sure she dug it so much. Really likes C&C, though.

I want to run more of the OD&D, maybe for more players. In fact, I want to do that RIGHT NOW.

Too bad I'm at work.

I ain't even kiddin'. How apropos is THAT?!

I ran a Swords & Wizardry game in the local gaming group which is filled with modern RPers. I was worried about keeping their interest but it turned out to be a fast moving session with a lot of stuff happening. They ended up loving it.

There's something to the simplicity of the earlier games which I think some folks don't know about or completely missed out on.

Time will tell if the designers of 5e understand that little tidbit...