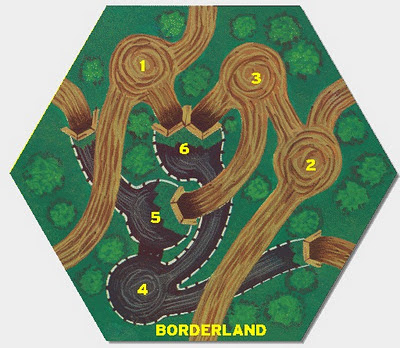 Magic Realm was released in 1978, and was one of the first hex-crawling rpg boardgames.

In fact, Magic Realm uses 20 hex tiles to create a unique game board every time you play.

The above BORDERLAND tile is placed first, and the players take turns placing additional tiles, until all 20 tiles have been placed.

The tiles can be rotated and oriented in any of six facings, and are then placed next to another tile. 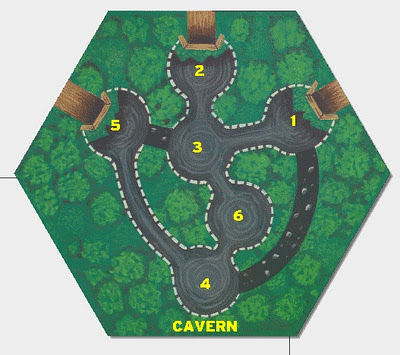 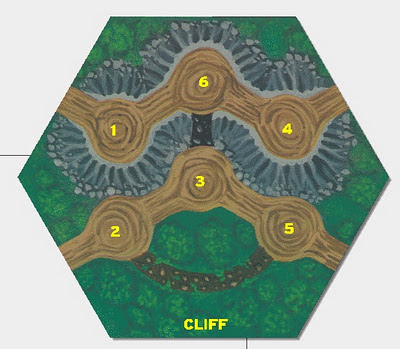 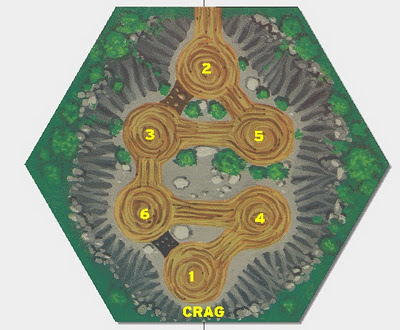 Each clearing has a number. Treasures and monsters are placed randomly on tiles, but can be found in specific clearings. The treasure and monster counters are placed face-down on the tiles at the start of the game, so you don't know what is in each tile, nor which clearing it is in, until you travel to one of the hex tiles and search it. 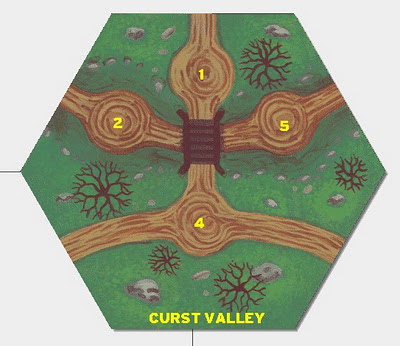 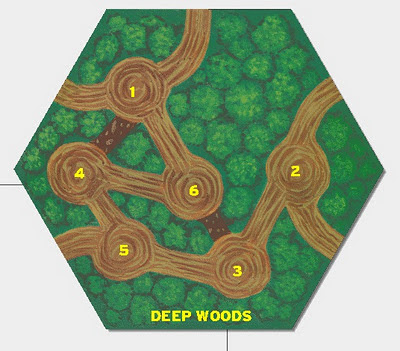 All of the mountain and caves tiles have 6 clearings, and are the only tiles where treasure hoards are to be found. The DEEP WOODS above is considered a mountain tile for the purposes of the game, as well as a woods tile. Woods tiles benefit the Elf and the Woodsgirl, two characters in the game. 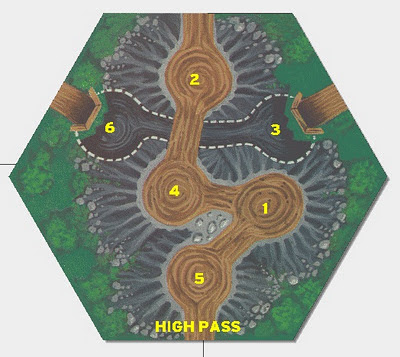 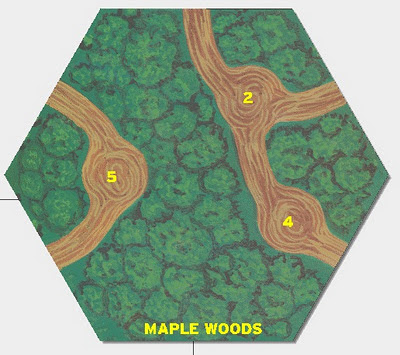 The MAPLE WOODS is one of five woods tiles. The woods tiles are generally used for travelling and connecting other tiles, but some of the native groups and medium monsters appear in the woods. 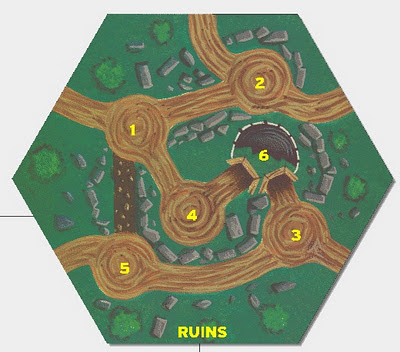 The RUINS is considered one of the 5 cave tiles, even though clearing 6 is only actual underground clearing. There is a secret path between clearings 1 and 5. 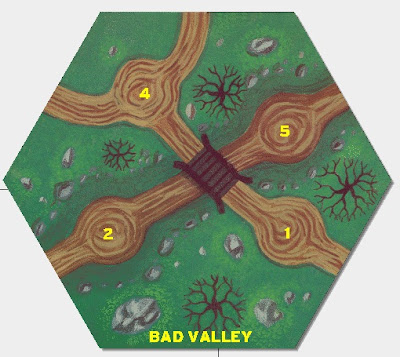 Here is another valley tile. Valleys are where you will meet most of the human inhabitants of the Magic Realm, and are safe havens from monsters. The Inn, House, Chapel and Guardhouse are all placed in separate Valley tiles at the beginning of the game. Two other human gathering places, the Large and Small Fires, are found in the woods tiles, but those locations are unknown at the start of the game 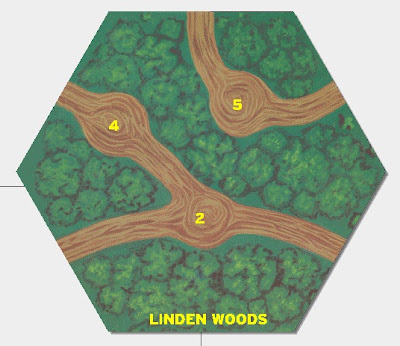 I know I said that you can only travel along the roads, but there are two exceptions to that rule. The first is flying. Characters that can fly (the Witch using her broom, the Sorceror if he finds the Magic Carpet, and so on) to a tile and roll randomly to see which clearing they land in. Also, some spells allow characters to walk the woods, with essentially the same effect. 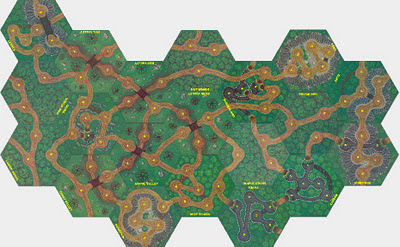 Here is a sample game board built with all 20 tiles. Again, every game board will be different, with different placements of treasures, monsters and human inhabitants. So every game is different.
Posted by Aaron E. Steele at 2:03 PM

Rather inspired. Honestly if one wanted to, I've seen these hex pieces before at Lowes and Home Depot. The ones I saw were cork, but it wouldn't be hard to affix something to them, etc. One could just make a template and cut out hex pieces in MDF or whatever. Then obviously paint up their own similar system. It would take some creativity on the part of the person painting up the tiles, but. I've seen the same thing recently with those folks who put out the dice that have random dungeon tiles on them. Interesting ideas. I always see stuff like this and feel some inspiration, but then I remind myself ... I know no one in my area who is doing OSR stuff (and I've entirely given up 3.0-4e era D&D I just can't take it anymore) so I can only look on, like the poor homeless kid looking, longingly, through the window of the toy store :) Good post and thanks :D

Glad you both liked. Nice suggestion about the hex tiles, I believe we have recently been invaded by Lowes, so I will check out to see if they carry something like you describe.

I'm no artist, but you make an interesting suggestion.

You can find instructions to build your own Magic Realm board and game pieces online, I don't recall the exact location at the moment.