If The Glove Fits You Must Acquit Yourself

Most characters in Magic Realm will eventually be required to acquit themselves well in combat. As much as you try to avoid it, you will eventually be forced to face-off with some monster, or a group of natives with chips on their shoulders.

This is where a set of magical gloves come in handy. There are four sets of magical gloves scattered throughout the Magic Realm: the Deft Gloves, Handy Gloves, Power Gauntlets and Gloves Of Strength. Each set of gloves provides unique advantages to its owner. 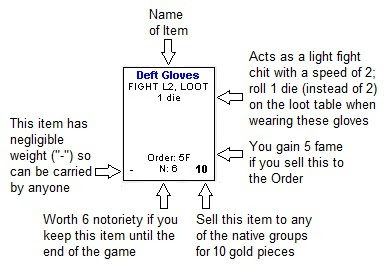 The Deft Gloves are so named because not only do they provide the equivalent of a light fight chit with a speed of 2, useful for the nimble, swashbuckling characters, but they also allow the wearer to roll one die when looting a treasure site.

Since the wearer would otherwise roll two dice, and use the higher of the two rolls when looting, employment of these gloves significantly increases the wearer's chances of obtaining rarer treasures, since those treasures are usually only discovered with low die rolls.

The Deft Gloves are the most valuable of all gloves, worth 10 gold pieces to any of the native groups. In addition, if sold to the Order, you obtain 5 fame points towards your victory conditions. 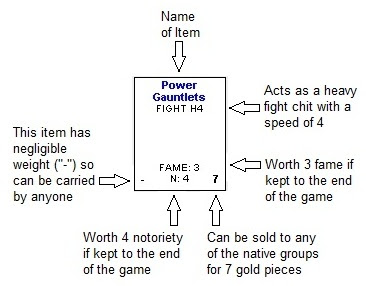 The Handy Gloves and Power Gauntlets are very similar. The Handy Gloves provide the equivalent of a medium fight chit with a speed of 3, while the Power Gauntlets provide the equivalent of a heavy fight chit with a speed of 4. Both sets of gloves are attractive, as most characters must exert significant effort to achieve those fight speeds, and where effort is expended, fatigue is suffered. Thus, the medium and heavy characters can avoid fatigue by utilizing these gloves. 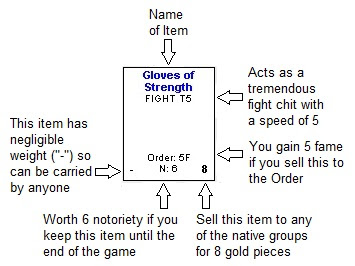 Like the Deft Gloves, the Gloves Of Strength are coveted by the Order, who will award you with 5 fame points if you sell those gloves to them.

However, these gloves are far more useful in combat: they allow you to dish out significant damage, when employed with the right weapons, and can also be used to open the Crypt of the Knight and the Vault, two rich treasure sites, since you need tremendous strength to open either.

The Gloves Of Strength, like the Handy Gloves and Power Gauntlets, also eliminate the fatigue that usually accompanies playing tremendous fight chits of this speed.
Posted by Aaron E. Steele at 4:50 PM