Will McLean Humor From The Dragon Magazine 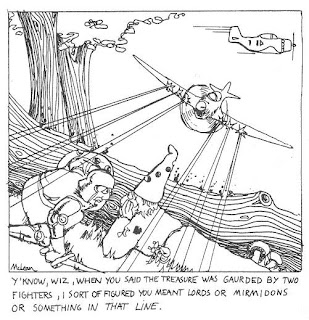 Most of you are familiar with the cartoons of Will McLean, as they appear on the pages of the original Advanced Dungeons and Dragons Dungeon Masters Guide, authored by Gary Gygax.
Several of Will McLean's cartoon panels also appeared in The Dragon Magazine. The above cartoon appeared in Issue 24, April 1979, on page 18. The caption reads:
"Y'know, Wiz, when you said the treasure was guarded by two Fighters, I sort of figured you meant Lords or Myrmidons or something in that line."
In the early days of the hobby, it was not unusual to mix historical periods, with tanks existing along-side magic, and science fiction elements cropping up in medieval fantasy. Just look to Expedition To The Barrier Peaks, or Temple Of The Frog, for evidence of this cross-genre gaming.
This cartoon panel by Will McLean ably lampoons that early propensity for cross-genre gaming.
Posted by Aaron E. Steele at 8:07 PM

There's an issue of The Strategic Review that describes a Chainmail Fantasy/WW2 crossover game. Great stuff!

Will McLean's stuff is quite possibly my favorite comic humor from the early days of gaming.

@sirlarkins: I believe that was an article by EGG himself. Will have to dig through my stuff and see if I can locate it.

@Victor: Fineous had its moments. Wormy was a little too cerebral for my early teen mind (though I appreciate it much more now). Tom Wham's stuff was okay. But McLean's illos were my favorite.

I just happened across that same cartoon a week or two ago. Good one.