Monty Haul Campaigns And Will McLean 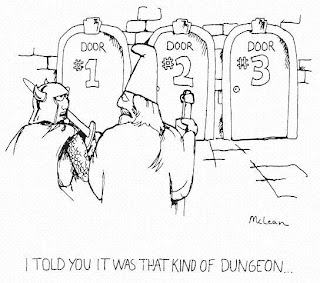 One of the thorniest problems facing the designers of early versions of Dungeons and Dragons was that of the Monty Haul campaign. Monty Hall (for those few of you unaware of the cultural reference) was the host of a game-show called "Let's Make A Deal", in which undeserving, ridiculously-costumed contestants would be asked to choose between three doors, behind one of which was hid a fabulous prize, with the other two, booby prizes.

Similarly, Monty Haul D&D campaigns were those campaigns where players were handed arbitrarily large experience points awards and fabulous treasures by the DM, and rarely faced any risks. Letters detailing the horrors of those campaigns literally filled the pages of early Dragon Magazines.

The above cartoon appeared in The Dragon, Issue 24, April 1979. Even at this early stage of D&D's history, the Monty Haul campaign had acquired such infamy that Will McLean was spoofing it.
Posted by Aaron E. Steele at 8:03 PM

I think I am improving, but still, I have issues.

I think Monty-Hallism is a phase that most gamers pass through in their development of play. I know I went through a phase of doing that after I was GMing the game for a couple of years. Eventually, the uber-pimped-out characters became boring and went off to retirement. The next group was very low keyed and rather lackluster, FUN AS HELL! Ordinary encounters became a challenge once again. I think one of the ongoing challenges in GMing over years is that new and/or younger players will soon want to take their hand at pushing for some sort of Monty-Hallism gracing their campaign. I would imagine that is even more the case with players coming from MMO’s where they do become that powerful in a short amount of time.

I have to agree with Padre...I think all new players need to go through the Monty Haul phase in their gaming career just to see how powerful and wealthy their characters can be before they reel it back in and learn to play a more modest "realistic" style of play.

My 20th level Magic-User (who started at 14th level with no ability score lower than 15) wielding Barrier Peaks blaster rifle with endless power disks would get suspiciously upset at the assumed criticism. My friend's fighter with the Hand and Eye of Vecna, the Sword of Kas, and the Rod of Seven Parts is coughing self-consciously.

What?! We were 7th graders!

I seem to recall being involved in some Monty Haul campaigns back in the day. Ultimately, they were pretty unrewarding, but it seemed exciting at the time.