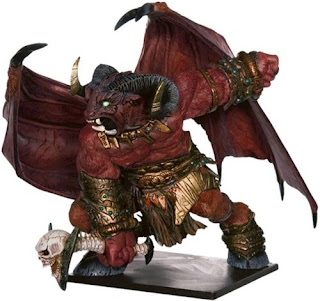 I posted, many months ago, about my then-favorite Orcus miniature figure, produced by Reaper Miniatures. Reaper makes a very nice Orcus miniature (much better than the underwhelming old version of Orcus from the retired D&D minis game). I own a copy of the Reaper version, which is in mid-paint job.
Here's my new favorite Orcus figure. This is being produced by Wizards of the Coast, in limited quantities, and is being distributed some time around June 16, 2010. I found news of the pending release of this Orcus figure here at the maxminis forum, and pre-release ordering details from things from another world (i've never ordered from that site, so I have no idea whether they are reliable or not).
The figure is $75. That's a lot of money, although the figure is supposed to be one of the larger ones they have ever produced.
Posted by Aaron E. Steele at 12:01 AM

You actually like this one better than the Reaper version? Care to explain why, because this one looks much too gaudy in my opinion.

Not a fan I'm afraid. It's just too mesomorphic to match up with the (fat and manky) Orcus image in my head.

I have the gargantuan black and blue dragons, as well as the colossal red dragon, from the icon series of pre-painted plastic minis. They are quite impressive (the colossal red is truly something to behold). They are quite expensive, as you mentioned and it is also difficult to come up with a suitable use for them in game play. As such, I decided against the gargantuan white dragon when it came out. I suspect i will also take a pass on Orcus (though I will be sorely tempted).

Hey Chev. I gather you find it gaudy due to the gold armbands and the rest of the paraphernalia. Do you also find the size too excessive?

This Orcus pose is far more energetic than the one produced by Reaper. I much prefer an active to static pose, which explains part of my preference. The Reaper fig, while very nice, is rather inert.

This fig is also at least three times the height of the Reaper Orcus fig. The Reaper fig is about twice the height of a typical 28 mm miniature, the WOTC one has got to be easily 4 times as high as the Reaper fig. I can only imagine the bug-eyed looks from the players as you begin combat by revealing this figure for the first time.

It won't get much play (how many times do you get to face-off against Orcus?) but it is one heck of an imposing fig, for the most iconic of all D&D Demons.

Can't say I'm much of a fan of either. I much prefer kobolds. And $75 you know how many thousands of pages of RPGs (when bought off ebay) that equals? Well probably only about one, but that's a lot of pages. Or, $75 will get you roughly 125 D&D prepainted figs. I just can't condone that little bang for so much buck.

But, of course, YMMV.

I really like that older mini here myself, but I get the appeal of the newer one. I reckon I'd have to balance between Norm's comment above,that is, a wicked older mini and and a bunch of of other stuff. But if budget is of no consequence, then sure, whatever.

I have to agree with Paladin. I think this new one just looks "meaner" in the face and more imposing due to the action pose. Both of which for me increase its "pure 'holy-**** we're screwed' factor," as Paladin so aptly put it.

This is going to be my birthday present to myself (or my kids will give it to me).

I like it myself. Of course in my mind Orcus should have grey fur and not red skin, but I can live with this.

As much as I like Reaper minis (I have a few) I just don't like that Orcus of theirs.

I have the older Grenadier version of Orcus (mostly painted) in my mini collection. I posted a pic at my blog, Carjacked Seraphim. I really think that it is the "iconic" Orcus that I have in my head. He's portly *and* dangerous looking. :)

I thought I heard this mini is "limited" ... If that is so ... you know its going to be largely snatched up by retailers ... who will sit on them and sell them on ebay for $200.00 :( Hopefully its not limited production.

As for the sculpt I like it ... I have the gigantic forgeworld Khorne demon that would easily fit the bill (and I think its larger still than this guy). Really large minis do tend to be over $50.00 ... even if they are unassembled and unpainted so I don't think the price is off the wall ... it seems reasonable as long as it is indeed an oversized mini (on par in size with their dragons). Just my two cents ..

I have this Orcus and it is very impressive. The detail and look of pure malice is amazing. It stands 6.5 inches tall much larger than previous Orcus minis(if you can call it mini). Easily the best Orcus out there.