The Arduin Grimoire As ODnD Supplement 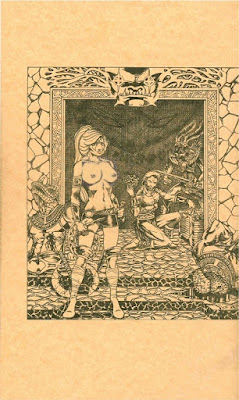 Reading and reviewing Dragons at Dawn led me to reminisce about another rule set, that also held itself out as a complete game system, but was really best used as a supplement to original Dungeons and Dragons. That other rule set, is, of course, The Arduin Grimoire.

Much (but not enough) has been said about The Arduin Grimoire. Authored by Dave Hargrave, who sadly passed away in 1988 (at the age of 42), the first three Arduin Grimoires were published in 1977 and 1978, some three years after the release of original Dungeons and Dragons. Like Dragons at Dawn, the Arduin Grimoire provided a myriad of alternate and supplementary rules and campaign suggestions, but Arduin was infinitely more extensive and table-laden. The first three Grimoires -- The Arduin Grimoire, Welcome to Skull Tower, and The Runes of Doom -- were nearly 100 pages each: the later six Arduin volumes were even longer.

But unlike Dragons at Dawn, the Arduin Grimoire (at least the books I have had access to) was, to put it politely, of uneven quality. For every blinding insight or brilliant suggestion, you would encounter some text equally execrable. But Hargrave never gave up on even his ugliest creations, often pleading with his readers to give his ideas a try, as it was only in the crucible of a role-playing campaign that the true value of his creations would be revealed.

Although this set of books was, and still is, passed off as a complete game system, it was born from Dave Hargrave's experience running original Dungeons and Dragons. It could be said, then, that The Arduin Grimoire is an example of OD&D house-ruling run-amok. A train-wreck perhaps, but a glorious one! While much of his material was largely derivative, there were some unique inventions sprinkled throughout his works, enough that many gamers considered his Arduin Grimoire to be part of the OD&D canon. TSR was not impressed with how close Hargrave hewed to their intellectual property, including explicit mentions to OD&D in his rulebooks, and famously slapped a cease & desist order on him. That resulted in the removal of any mentions of D&D in The Arduin Grimoire, although it probably did little to dampen its' sales. In some cases he simply whited out references to Dungeons and Dragons in his books, replacing those references with phrases such as "most often used ruleset".

The 12 black & white illustrations for the first Arduin Grimoire volume were created by Greg Espinoza and Michio Okimura. The above Greg Espinoza illustration appears on the back cover of the original Arduin Grimoire. I love Greg Espinoza's illustrations: there is a darkness, energy, and tension to them, absent from much of the modern art being produced for more recent versions of ye aulde game. The female in the above illustration first appeared top-less: even the intransigent Dave Hargrave was cowed into covering her nakedness in his subsequent, censored editions. As for the fighter in the background, opening the chest of treasure, he was reportedly modelled after Clint Eastwood.

And in case you doubt my objectivity with regards Arduin, I am happy to quote from someone else that you may, given the circumstances, feel has little to gain from extolling Arduin's virtues and vices. Jonathan Tweet had this to say about Arduin:

"Arduin's appeal isn't in its elegance, its comprehensiveness, its game balance, or its presentation. It's the author's enthusiasm that counts. Hargrave loved running his Arduin campaign, and the books read like the campaign notes of a manic DM. He often refers to his own campaign and how he makes rulings, runs combat, handles treasure, etc. Hargrave's enthusiasm is contagious.

The good folks of Emperor's Choice have reprinted the Arduin trilogy, so this piece of RPG history is available again. They've reprinted a later edition from 1981 or so. It has references to Dungeons & Dragons edited out, and it has better art than the original. (The bare-breasted woman on the back cover, however, got a leather bra for the second edition.)"
Posted by Aaron E. Steele at 9:15 PM

Arduin was a wacky, bizarre and mostly fun game to play in. Never tried running it though. But such craziness, a true kitchen sink setting, but as Jonathan Tweet says, bubbling over with enthusiasm and the desire to have a good time.

Arduin is a wonderful example of someone running off with the contagious premise that the game is ours to make over into something new, cool and uniquely our own...and while the results of Hargrave's efforts are, as you said above, uneven, they are a nice legacy that he has left to us all ans I am glad to see that Arduin lives on. Besides, train-wrecks are awesome, didn't you ever watch the Addams Family growing up?

Thanks for the kind words. It's kind of weird, though gratifying to see that someone is still looking at something I did so long ago.

And F.Y.I. Emperor's Choice hired me to revisit the Arduin Covers for their new trilogy. Cheers. :)

The Emperor's Choice materials are high on my list of items to buy. Loved your artwork then, and now.

I also visited your website, and must say you continue to impress!