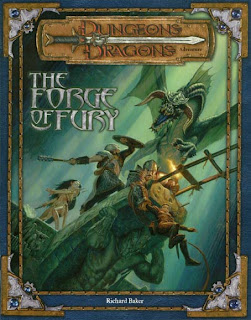 Who knew, at the time, that this same Todd Lockwood -- who starting out playing D&D with his buddies in the early years of the hobby, and played while attending art college -- would join TSR sixteen years later, and become famous (along with Sam Wood) for defining the visuals of 3rd Edition Dungeons and Dragons.

I am embarrassed to report that I had no idea that Todd Lockwood, of Dragon Magazine #42 fame, is the same Todd Lockwood who would later create the concept art framework for 3E and 3.5E, and provide memorable covers for D&D products, such as The Forge of Fury (I bought the adventure and the related Black Dragon miniature, based on that cover alone) and City of the Spider Queen. A list of Todd Lockwood's impressive artistic rpg art credits can be found here, at Pen and Paper.

You can find Todd Lockwood's website here, and his blog, Behind The Water Heater, here.
Posted by Aaron E. Steele at 9:23 PM

While I do like his 3rd edition art that Orcus picture was just stunning. But then I've always loved pen and ink illustrations, especially when done in that style.