Humor In Dungeons And Dragons 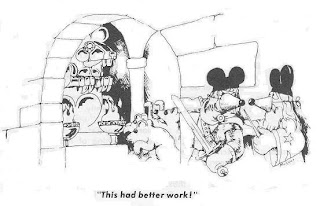 Perhaps i'm looking in the wrong places, but was seems to be missing from later versions of Dungeons and Dragons is a sense of humor.
In the early days, Will McLean was a cartoonist for the "Dragon Mirth" section of The Dragon magazine. His cartoons also appeared in other TSR publications, such as the Dungeon Masters Guide. The above cartoon is fondly remembered by many: it appeared on page 34 of Gary Gygax's DMG.
I loved Will McLean's cartoons. They captured a gonzo, self-deprecating, tongue-in-cheek attitude that was a welcome tonic to players and DMs taking themselves, and the game, too seriously.
Sure, Will McLean's cartoons were the throw-away lines, or the drum-roll-punctuated jokes, of the Dungeons and Dragons illustration universe. But that was part of the fun of D&D: getting together with friends, and sharing some fall-out-of your-chair laugh-fests. Early versions of D&D were that much the better, for having included humor in the game.
Posted by Aaron E. Steele at 4:35 PM

Thanks for the reminder!

Without McLean's art, the DMG (and AD&D) would NOT have been nearly as popular in my circle of friends. All of us loved (and commented) on his stuff, leading us to re-read and peruse the book all the more...