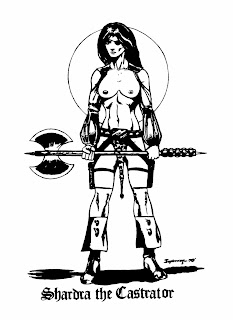 I suppose if you are going to be castrated, it may as well be by Shardra the Castrator, an Amazon bandit from the pages of The Runes of Doom, the third in the Arduin Grimoire series of fantasy RPG supplements.

Shardra, while topless for the first printing of The Runes of Doom, was covered up for subsequent printings. Whether you saw that as a necessary response, or an overreaction, to the self-appointed morality police, the self-censorship did ultimately result (in my opinion) in a diminishment of creativity by the professional publishers of the day.

The 100-page Runes of Doom was published in 1978, and was billed as the third, and final chapter, in the Arduin Grimoires. Dave Hargrave would go on to publish 5 more Grimoires, after this, his supposed swan-song. A sixth would be published, after his death in 1988, bringing the total to nine grimoires, comprising easily 1,000 pages. Quite an achievement, for what was largely an amateur effort. And I don't mean that in a deprecating way: Hargrave was certainly an amateur publisher, but that doesn't mean that his material can be dismissed as entirely amateurish. On the contrary, it, like the AD&D DMG, has all sorts of blindingly mind-bending (and ocassionally inscrutible) insights and suggestions.

Yes, sometimes Hargrave's material was childish and prurient -- look no further than Shardra the Castrator, who in addition to her modus operandi also had a related dining ritual (nuf said) -- but I find much of his work to be a useful tool: he delves into all sorts of forgotten, ignored, and dusty corners of campaign and world-building. Sometimes his explorations will lead you into dead-ends. Other times, he opens up a tunnel to some unexplored cavern, filled with sparkling gems.
Posted by Aaron E. Steele at 2:35 PM

Juvenile, no argument, but I don't know that I'd go so far as to call barebreasted ladies prurient.

Now, I'll coincide that uh-unrestrained breasts of that size might impair her battle-readiness...

They certainly would have impaired my battle-readiness.

I have heard that there was some editorial swimwear applied to the back cover of later printings of the first Grimoire as well.

True. Check out my post from Tuesday (for the censored version).

I've never actually looked at any of this stuff. The buy in is a little steep right now, otherwise I'd love to see some of it.
I'm all about juvenile, that's for sure.

I never understood the American fascination or repulsion with breasts.
Are we still children who are not allowed to look at naughty pictures?

Most of us are rational people.
The solution is simple, gaming material like movies should be rated, i.e.; G, PG, R and X.
We do not need a committee or single arbitrator to adjudicate; I trust the writers and publishers to regulate themselves.

“Any man who tells you he learned to play guitar, because he liked music – is a liar.”
Ted Nugent

I've never actually looked at any of this stuff. The buy in is a little steep right now, otherwise I'd love to see some of it.
I'm all about juvenile, that's for sure.

Believe it or not, Arduin is still in print, and the entire set can be purchased relatively inexpensively. Check out Emperors Choice. Note that these are reprints: the last six books are now printed as 6x9, rather than the original 5.5x8.5, and the original trilogy has been collected in one 7x10 book.

Self-regulation seems like a reasonable compromise. It was a bigger issue in the 80's when D&D was popular and parents were buying D&D stuff for their pre-teens. Less of an issue now.

I agree about the "gems" that can be found within. In "Dark Dreams" there's a cool page on different colors of spider silk, another on the "Black Metals" of Arduin, and I like a little system he created called "Rogue Magic". Plus - some of his spell names are a lot of fun!

Thanks for the tip. But I think the Ultimate Toolbox is next on my list. Arduin will have to come after that.

The Toolbos is awesome. I have the original and would never part from it.

AJ: thanks for dropping by, don't miss visiting Rosslyn Chapel while you're in Scotland.

Got the serfs covered off for May 1.

The censorship may just have been a matter of illustrating practicality. Battle-ready or not, I'd figure it's easier to swing an axe in a sports bra!

That has always been my favorite picture in the Arduin Books. It is so over the top and goofy, that I think of it as capturing the essence of drawings on high school pee chee folders.