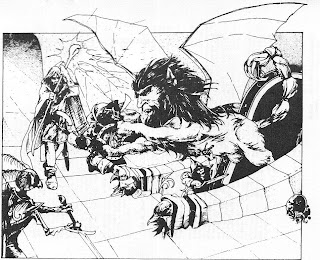 Here is another illustration from the Arduin Grimoire, this one by Bradley W. Schenck, otherwise know as Morno back in the day. This illustration, of the dreaded Manticore surprising an adventuring party in the depths of Skull Tower, appears on the back cover of Welcome To Skull Tower, the second Arduin rulebook. It is one of 14 black & white illustrations that appear in this book. I love the look on the face of the thief, wielding his dagger and a set of keys, as the Manticore leaps over him, knocking down the axe-armed Dwarf.

The 1977 AD&D Monster Manual describes the Manticore as possessing a tail of iron spikes, which are volleyed at its opponents prior to combat. The above, alternate Arduin Manticore, has a scorpion's tail, which I find far more interesting (and deadly). I also prefer this illustration to the one by Sutherland in the Monster Manual: both are black & white, yet the in medi res nature of this combat scene adds far more tension and excitement to the monster illustration.

Which brings me to another thing I love about the old approach to role-playing fantasy art: the use of multiple artists, and art styles, allowed for a heterogeneous depiction of adventurers, scenes, and monsters. That encouraged a flowering of imagination. My scorpion-tailed Manticore was just as permissible as your iron-spike-tailed version.
Posted by Aaron E. Steele at 9:21 PM

My mini of a Manticore has the iron spiked tail, but now that I think about it-I would rather have the scorpion tail too.

One of my favorite monsters, either tail option works, I prefer the wingless, classical mythology manticore for subterranean fun.

The manticore has been my iconic fantasy monster for many a long year now :)

I like the old school look of the manticore compared to the 3.0/3.5/pathfinder version. The newer versions all look strange to me... not normal like a lion-headed scorpion tailed, batwing monster :)

The manticore is one of my favs as well. I love any monster that has a real-world mythology to go with it. Not dissing the Gygaxian creations at all, just love the history surrounding some of the weirder creatures in literature.

Paladin,
I don't know if you saw my post on the Red Box forums but I can't make it on Sunday.
Patrick

Thanks, May 8 or 9 sounds great, I replied on RBC.

Otherworld Miniatures has you covered:

This is a Manticore, a monstrous flying lion-man, which has been sculpted by Jo Brumby. It is a 7-part model with a 100mm wing span, and it will be supplied with an alternative scorpion tail (not pictured). It is packaged with a 40mm round plastic base. The photo shows the sculptor's master model.