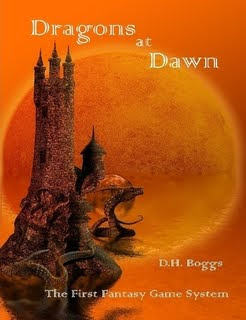 While I was hoping to read a few more reviews of the new Dragons at Dawn RPG before I made the plunge and purchased it myself, my curiosity finally overcame my legendary steely resolve. I downloaded the $8 pdf version of Dragons at Dawn yesterday, and spent a couple of hours today immersed in 60-pages of Arnesian game design.

How does one review a role playing game like Dragons At Dawn? That was the question plaguing me as I prepared to write this blog entry. Several approaches seemed equally appropriate. I could review this game as a exercise in historical archaeology. In doing so, I would want to determine whether the author of Dragons at Dawn (D.H. Boggs) accurately captured the essence of Dave Arneson's gameplay. Alternately, my review could compare and contrast Dragons at Dawn to original Dungeons and Dragons. In applying that approach, I could alternately reveal where "Gary Gygax played it wrong" and where "Gygax provided a much needed tune-up". Or, I could evaluate Dragons at Dawn as a set of rules that must succeed or fail on its own merits. That would require me to consider this rule-set, in comparison to other recently and professionally produced role-playing games. Or I could acknowledge Dragons at Dawn as a labour of love by a die-hard D&D fan, and review it as a DIY effort. That would result in a different set of expectations, regarding completeness and usability. As a further alternative, I could review this as a supplement to an existing game, namely original Dungeons and Dragons. That approach would require that I consider how this adds to the already existing body of rules. I could also apply some or all of those five approaches. The later would result an extremely long post, and likely more research on the part of yours truly (particularly as regards number one).

Before I go any further, I need to say the following. What D. H. Boggs has done, in recreating the original Dave Arneson fantasy rules, is to be applauded. Dragons at Dawn is a superior effort. The author has recovered an important part of the history of Dungeons and Dragons. This offering informs our understanding of the original rules, as well as Arneson's First Fantasy Campaign, thus enriching our enjoyment of the game. This is well-worth the $8 investment.

In the end, I decided to review Dragons at Dawn as a supplement to the original Dungeons and Dragons game. In choosing to review it as such, I acknowledge that I am ignoring the stated intention of the author of Dragons at Dawn, to produce a complete system that represents the Arnesian approach to game play. While that intention is laudable, readers demanding that his effort be wholly successful, in a slim volume of 60 pages, seem unreasonable, when you consider that Gygax was afforded more than 250 pages to produce the original Dungeons and Dragons and the first three supplements.

As a supplement to original Dungeons and Dragons, Dragons at Dawn is a resounding success. It covers (in greater and lesser detail) such topics as cooperative versus competitive play between players, alternative classes such as the Merchant and Sage, variant multi-classing rules, an attribute-based task resolution system, rules for gaining further education and skills, fixed hit points by level, monsters as characters (including increasing their levels), adventure and setting design, random chance and fortune cards, a complicated morale-check system, a flowchart and matrix-based combat system, a spell creation system, non-adventuring experience acquisition suggestions, broadly applied alignment-based magic item rules, recommendations on tracking game time, and equipment lists that have ranges for the cost of various items.

Considered as a variant or augmentation to original Dungeons and Dragons, Dragons at Dawn offers a lot. Peppered throughout the booklet, you are further provided with nuggets of wisdom, being quotes from Arneson himself, culled from various interviews and forums. Those are a welcome addition, illuminating Arneson's gameplay approach and accumulated wisdom.

I am not qualified to comment on whether Boggs has fulfilled his stated goal, of faithfully recreating the game as played by Arneson, others, closer to Arneson can provide that assurance. I will also not wade in on whether or not Gygax got it right in original Dungeons and Dragons. As a collaborative exercise, original Dungeons and Dragons will necessarily contain a synthesis of their two game approaches. As for completeness and usability, the slimness of this volume almost necessitates its' use in conjunction with other gaming materials. But as a supplement or variant for OD&D, and as an illuminating look into the original fantasy campaign, you would be well-served by including this volume in your gaming collection.
Posted by Aaron E. Steele at 10:31 PM

Thanks for the review. I was curious about this exact take on Dragons of Dawn, i.e. whether it worked as a supplement.

That would be my preferred use for this product. There's some useful advice,and lots of promising kernels in this ruleset.

How much would you say would be new and salvageable to AD&D or an AD&D clone?

(Though it sounds neat enough I may have to check it out regardless.)

Thanks for posting about this. I've been quite curious about it.
I too would like to know how much it could add to a more AD&D centric rules set.

Dragons at Dawn is so mechanically different from AD&D that, frankly, you would have to do a lot of tweaking to make it work for AD&D. That's not to say that it is valueless in that environment, its just you'd have to play the role of Gary Gygax, teasing out and expanding on Dave Arneson's crazy ideas.

Dragons at Dawn is much closer to OD&D, in that you are given a lot of latitude to make rulings.

An interesting feature of Dragons at Dawn: you inflict damage on your opponents based on your character's level, not by what weapon you wield. For example, if he wins the combat, a 7th level fighter inflicts 7d6 damage on ALL opponents he is fighting. The total wounds is distributed between all of his opponents, from weakest to strongest. Since what weapon you wield is immaterial, Dragons at Dawn dispenses with a weapon listing: any weapon is 5-15 gp. You can decide what specific weapon it is, but that is simply a flavour thing.

Nice review. It has helped me understand just what D@D has to offer. I really like the way damage is handled in the game.

Here is the rub though... would you actually use D@D for a full blown campaign, or is this game something that is cool to have around for reference only? I do not expect it to replace D&D, but I am curious just how much the game will get played?

Thanks for reviewing this -- I've been very curious and now I think I will get it.

I personally would not use Dragons at Dawn as a stand-alone ruleset.

But whether someone else would use D@D as a stand-alone ruleset depends on their preferences. Do they find the original 3-book OD&D set too restrictive? Is B/X too rules-heavy for their tastes? Then D@D is probably for them.

I would definitely incorporate some of D@D into an OD&D campaign, or at a minimum, use it as insiration for my own house-brewed rules.

Perhaps my perspective will change with the release of Dragons at Twilight.

Having said all that, I really enjoy D@D, both as an archaeological exercize and as inspiration.

Thanks much for the kind review! Using D@D as a supplement for OD&D or Classic D&D isn't an approach I had in mind but is certainly a very workable one. For my gaming at the moment, its OD&D and AiF that act as supplements to DaD - mostly for monsters and treasure and some OD&D rules. But regardless of what is supplementing what, there is definetly a high degree of "swapability" between the rule sets; meaning if you don't like the classes, or the combat system or the magic system etc. of one or the other you could, without much trouble, swap it from one game to the other and/or add in elements back and forth. In fact that's exactly the sort of thing Dave Arneson did.