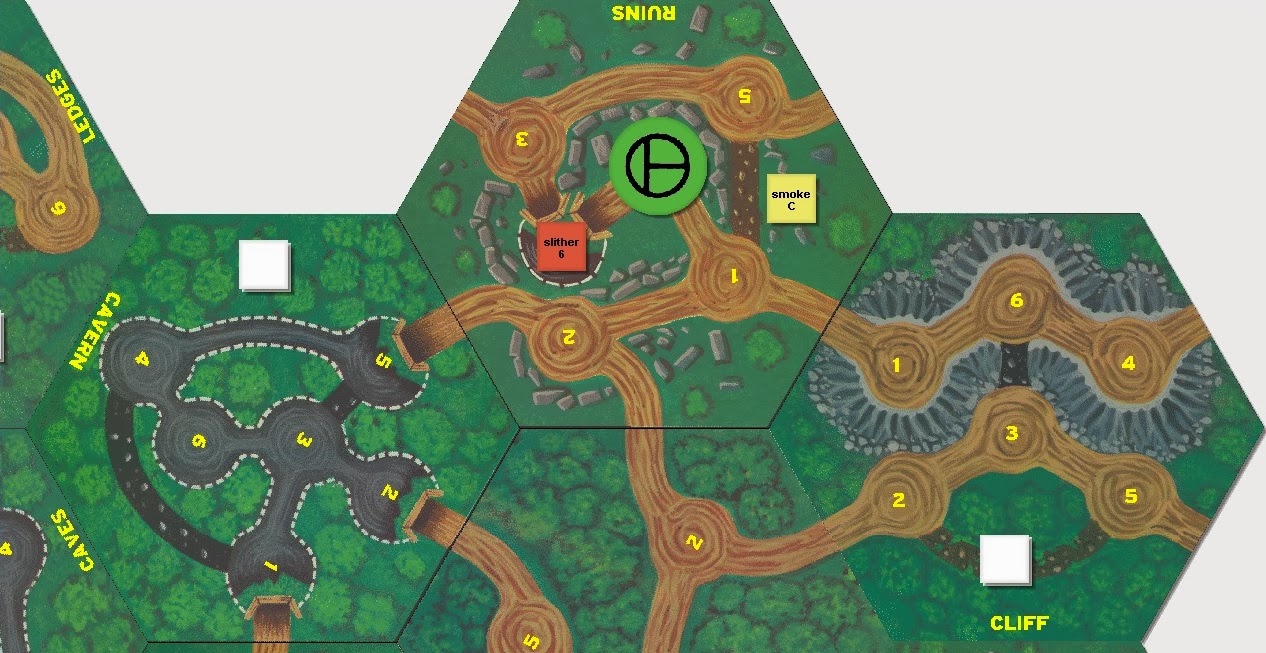 Let's move on to Day 3 of the Witch's adventures in the Magic Realm. The Witch starts the day deep in the Ruins, having flown here with her Broomstick spell on Day 2.  At the end of her turn, she reveals the Slither 6 and Smoke C chits, which summon Land Dragons and Giant Snakes. Yesterday's monster roll was 6 (Bats) so no prowling monsters were summoned to the Ruins on Day 2.

This is not a safe tile for the Witch.  She can run away from the two dragons that are summoned to this tile, for her Move L3* chit is faster than the move speeds of both the Heavy and Tremendous Land Dragons.  However, on a monster roll of 2 the Slither 6 chit also summons a pair of Heavy Snakes, who are invulnerable to the Witch's dagger, and are too fast to run from, having a move speed of 3 on their fast side.

The Witch would like to explore both the Cliff and the Cavern, as either might contain the Tremendous Flying Dragon or Tremendous Troll.  She also needs to rest her two black magic chits.  She does not want to linger at the Ruins, as the Tremendous Land Dragon is too slow to be a good candidate for Absorb Essence, and the Heavy Snakes are dangerous foes.

The Witch has at least three options for Day 3. 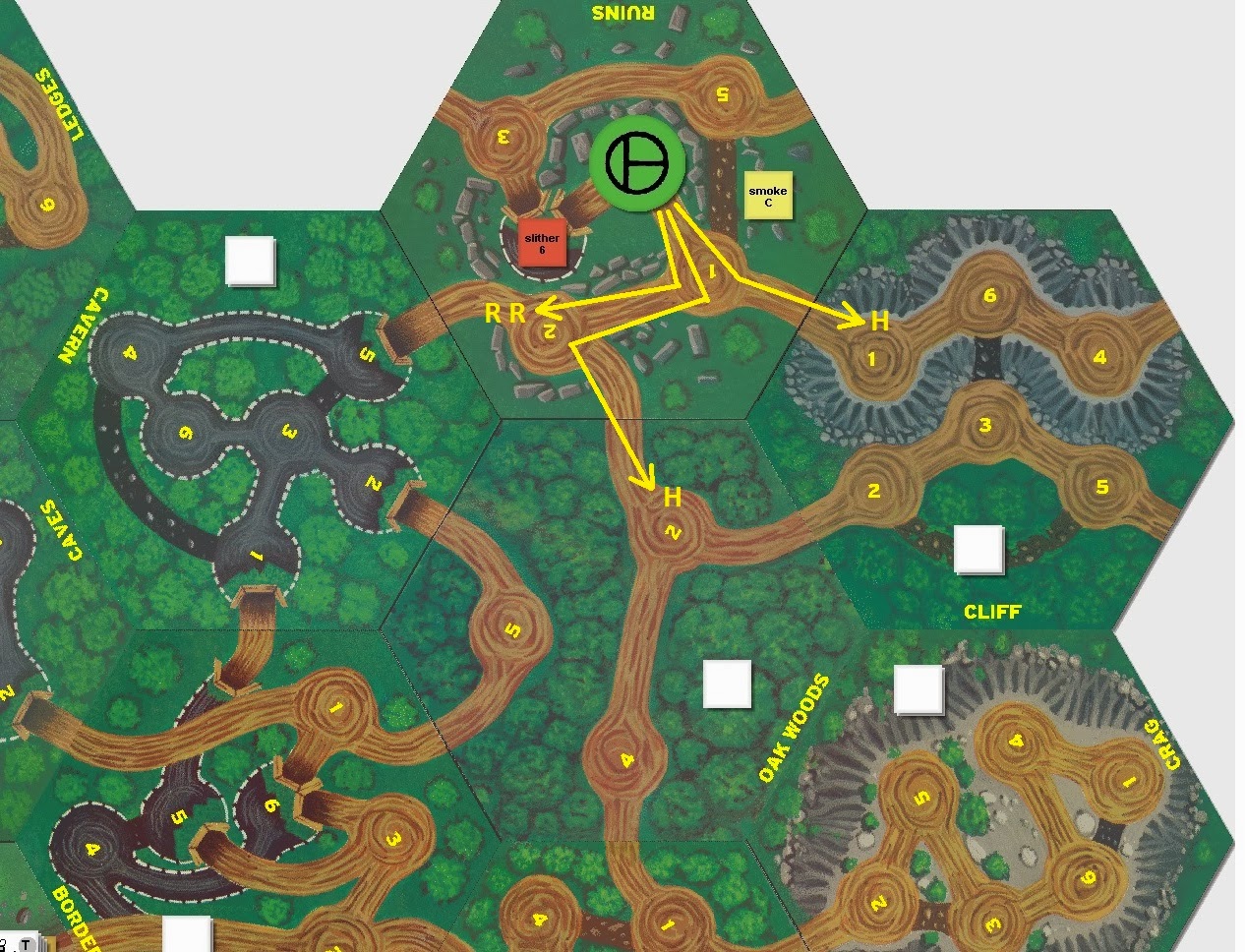 The Witch's first option is to move to the Cliff and do a single Hide.  A somewhat risky plan, though no more so that her Day 2 flight to the Ruins and single Hide.  Her second option is to move to the Oak Woods and do a single Hide.  The Oak Woods may be contain the Large Campfire (25% chance), or may contain a monster (75% chance).  She can run away from the Serpents and Ogres, but would be killed by the Wolves.  This is not a bad choice, but will put her a day behind in searching for monsters to absorb.  Her third option is to move to the Ruins 2 clearing and perform two Rest phases.  That will allow the Witch to cast Broomstick at the end of Day 3, so long as Dragons do not appear.  If Dragons do appear, the Witch would need to run away rather than casting her Broomstick spell.  She does not fear the immediate appearance of the Snakes, as they would appear in clearing 6 and would not trouble her in clearing 2.

In the end, the Witch's desire to locate the T Flying Dragon or T Troll trumps the other considerations, and she records three moves to the Cliff (three moves because she must record two moves for each mountain clearing she enters) and a Hide.

The Day 3 monster roll is a 2: Snakes and Demons.  The Witch is leaving the Ruins so Snakes will not be summoned to the Ruins today.  The Witch's black cat familiar moves to the Nut Woods and ends its turn.  The Witch moves to the Cliff and successfully hides. 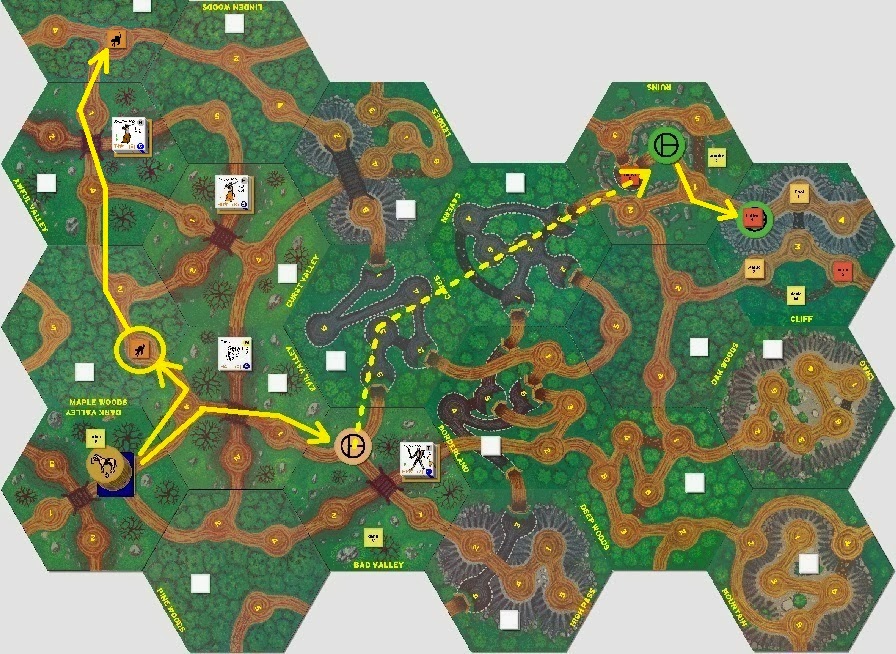 At the end of her turn, the Witch turns over the Cliff chits, revealing the Lost Castle 1 and Dank M chits.  She takes the 5 chits for the Lost Castle, and reveals Flutter 1, Flutter 2, Statue 2, Patter 5 and Pool 6. 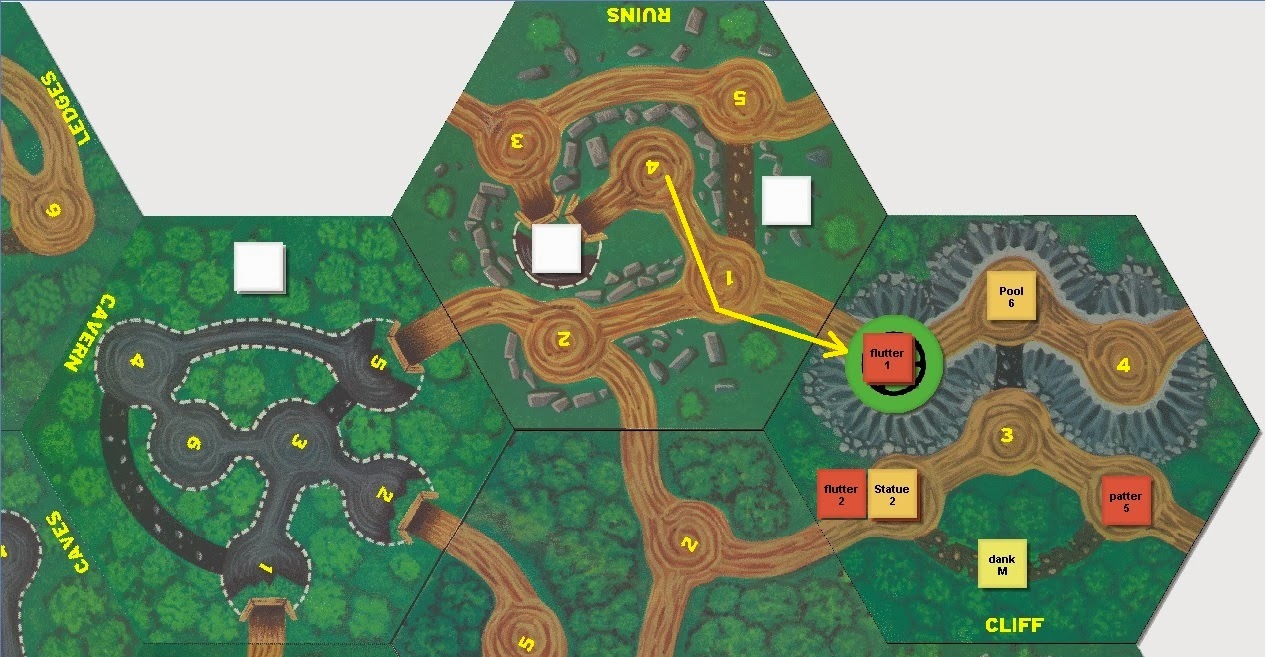 The Flutter chits summon Heavy Flying Dragons and Bats.  The Statue chit is a minor treasure location with a usable spell that summons the Imp.  Patter and Dank chits summon Heavy Spiders.  And the Pool is a major treasure location guarded by the Octopus.  Because the monster roll was 2, none of those monsters were (luckily) summoned to the Cliff.

Neither the T Flying Dragon nor the T Troll are summoned to the Cliff.  The Witch's turn ends.