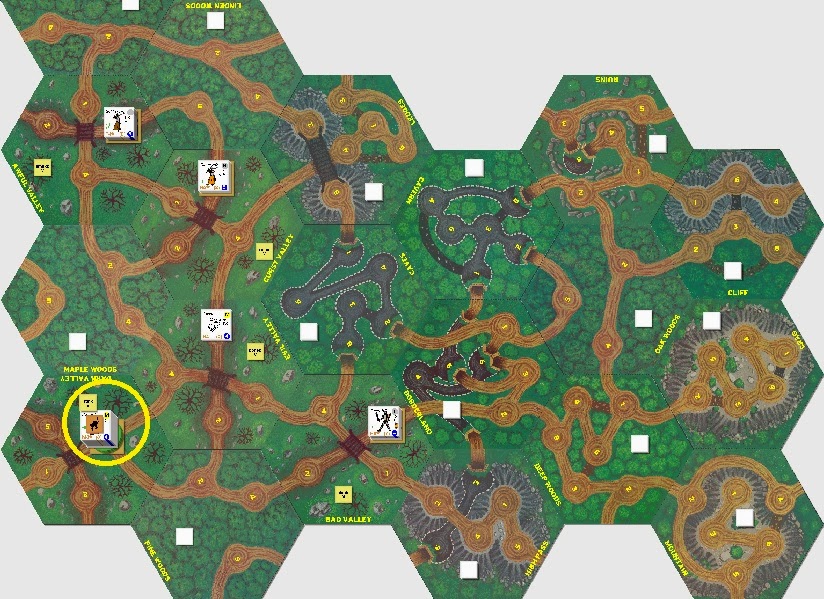 Welcome to the Witch's adventures in the Magic Realm. We have already built the map, which you see above (click to embiggen), using Robin Warren's fantastic Realmspeak computer program, a program I highly recommend.

The Witch starts her day at the Inn, circled in yellow in the bottom left corner of the map. The Black Knight and the Sorceror are also at the Inn at the beginning of the game.

As you can see, all of the Valley tiles are on the left-hand side of the map. The Sorceror and Black Knight have conspired to place the Valleys close together to maximize their probable joint kill-loot-sell strategy, an excellent strategy for those characters, and for novice players. This setup works perfectly well for them.

It is a dangerous map for the Witch, because her strategy involves visiting the wild, and if that strategy is followed, it will require her to be quite distant from safe Valley tiles. Having safe valley tiles nearby would give the Witch places to rest and recuperate between wilderness forays.

I mentioned in a previous post that planning is essential in order to maximize your chance of success in Magic Realm. Before the Witch records her first turn, she will analyse the map and come up with an action plan. That plan may evolve, but she will be most successful if she has some plan before she begins.

Let's look at some of the Witch's choices. 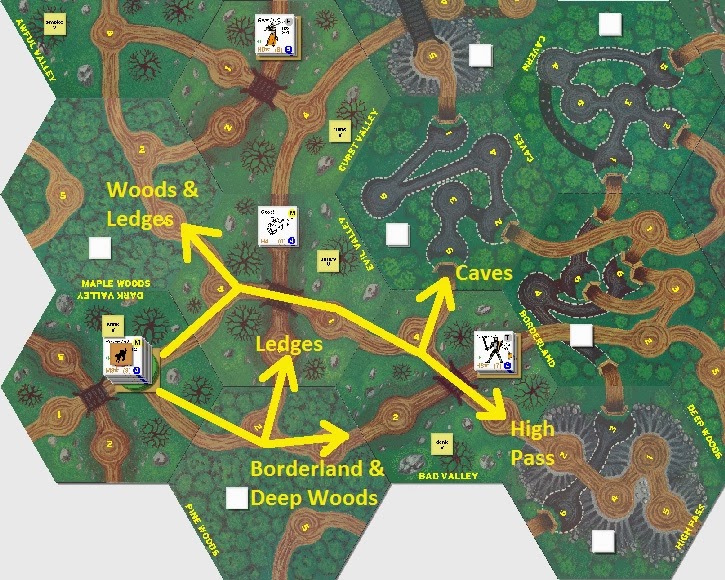 The Witch has six adventuring choices at the beginning of the game.  Five are immediately obvious, and include travelling in the directions of the Woods & Ledges, the Caves, the High Pass, the Ledges, and the Borderland & Deep Woods.

Of the obvious choices, the two best are the Woods & Ledges and Borderland & Deep Woods.

The Woods & Ledges are an excellent route because the Witch travels through three woods tiles, which may contain the Large and Small Fires.  The Witch wants to know where those are so she can hire the Company or Bashkars later in the game, both of which frequent the Large Fire.

The Witch cleverly placed the Crone and Shaman with the Bashkars and Company respectively, and those two travellers have spells she may want to buy (the Black Knight placed the Scholar with the Patrol, which was fine with the Witch, as the Patrol visits every permanent dwelling).  Both the Large and Small Fires are good places for the Witch to visit if she absorbs a monster and decides to engage in some native-bashing.

The Witch's other obvious choice is the Borderland & Deep Woods.  She will be relatively close to the Valley occupied by the Order, who while unfriendly to her, can be run away from, on her way to a safe Valley clearing.  The Borderland & Deep Woods are both good potential treasure sites.  The disadvantage to this plan is that the Black Knight and Sorceror are equally close to those, and may decide to follow the Witch there, thus mucking the Witch's plan to find a nice corner of the Magic Realm all to herself.

We've looked at five of the Witch's six choices.  Lets look at the sixth. 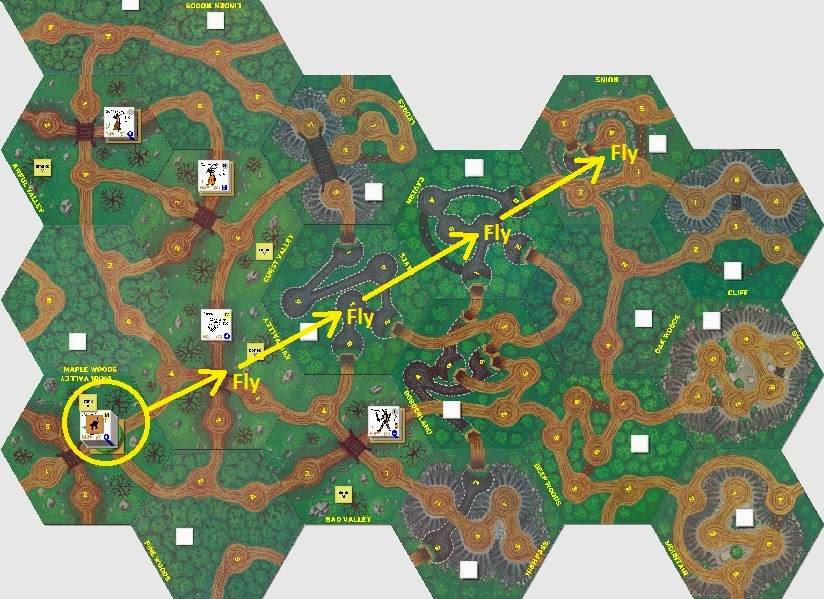 One of the three spells chosen by the Witch is Broomstick.  By casting Broomstick during the combat phase of Day 1, the Witch can fly to the far side of the Magic Realm on Day 2.  That will allow the Witch to get a jump on searching the Magic Realm without interference from the Black Knight and Sorceror. 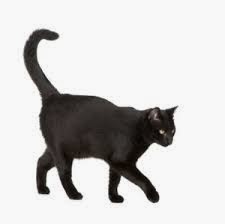 But what about the Witch's Black Cat familiar?

We can send the Witch's familiar off to explore the Woods and the Ledges, reporting back to the Witch on what she finds.
Posted by Aaron E. Steele at 5:03 PM