The Weather Outside Is Frightful 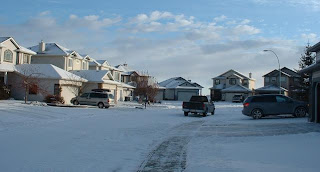 We've been remarkably lucky: No snow for over three weeks. However, we got snow yesterday afternoon, between 2 and 6 pm. Combined with a temperature around the freezing mark, this resulted in pandemonium on Calgary streets. It took me 3 hours and 10 minutes to get home from work last night, where it usually takes me only 25 minutes. Along the way, I passed innumerable cars, stuck on ice, or in accidents, plus at least one city bus/school bus crash-up, attended by several ambulances, tow trucks and other emergency vehicles. There were apparently over 100 city buses stuck on hills. Time to hunker down for the weekend, and not go too far from home!
Posted by Aaron E. Steele at 10:33 AM

Perfect gaming weather if you have players in walking distance...stay off the roads, stay indoors, mix up some hot drinks (perhaps with a shot of your favorite liquor), and break out those dice.

Personally, I always used frozen weather as an excuse for experiementing with those miscellaneous RPGs that spend more time on the shelf than at the gaming table...
: )

P.S. Please don't crash and end up in traction! Now that you're back from Vegas, I'm looking for some more blog posts, Pal.

Good to have you back after a week among the reprobate. The weather must be a bit of a shock to the system after time in Nevada.

Do you keep a set of chains in your trunk? I have no idea how to drive in snow. If it were to ever snow, I'd save myself a lot of hassle and just back my car into a tree and get the inevitable accident over with.

Glad to be back. There is a particular combination of weather that creates the sorts of results we experienced on Friday: first snowfall, combined with barely freezing temperatures, occuring in late afternoon. If the snow had fallen overnight, the sanding trucks would have been out and would have mitigated most of the slippery conditions.

Vegas was surreal. My first time there. My biggest complaint: the amount of salt in the food. I am only slightly hyperbolizing when I say I consumed more salt in a week in Vegas than I have in the 10 months prior.

@Christian: unfortunately, i'm pretty sure the use of tire chains within city limits is against the law: it chews up the asphalt something fierce.

@Rusty: the people in Vegas were great, but it's weird to go somewhere where "everything's" for sale. Perhaps it's just my Canadian propriety coming through...

We are still waiting on the first big snowfall here. I'm North of Toronto and we have had a beautiful November, lots of sunshine and mild weather.

I don't know about you, but I think there is something about the long Canadian winter that brings out creative inspiration. I do most of my gaming and get most of my good ideas in the winter.