Legends of the Ancient World: Wolves On The Rhine 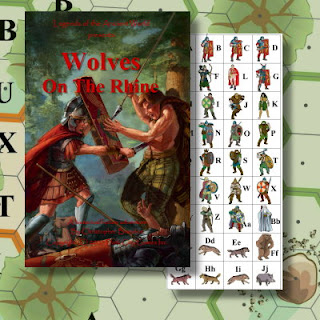 Several weeks ago, I reviewed Legends of the Ancient World: The Dark Vale. My review can be found here. I had several positive things to say about that adventure.

For those who may have missed my earlier posts, I should explain that Legends of the Ancient World is a retro-clone of The Fantasy Trip, comprising the two old Metagaming microgames, Melee and Wizard, with a little "In The Labyrinth" thrown in for good measure. My fondness for that old "rules-light" game system makes me want to champion Dark City Games, the retro-clone system's publisher, so they will continue releasing more of their pre-programmed micro adventures.
I purchased another Dark City Games adventure, Wolves On The Rhine, at the same time I purchased The Dark Vale. While The Dark Vale is a traditional fantasy adventure, Wolves on the Rhine is billed as historical fiction. Wolves on the Rhine was published in 2007: DCG has published at least four new adventures since then.
Wolves on the Rhine is set in the late Roman Imperial period. For those who are running a campaign based on an imperial setting, this adventure may be of interest: it has an Appendix, providing a system for generating realistic Roman names, and many of the encounters have a strong historical feel to them. The adventure itself is railroady: you are a small band of Roman Legionnaires, assigned the task of uncovering the motivation behind several "barbarian" attacks on remote imperial outposts. The encounters in this adventure lead you to macguffins, death, or clues to the true causes of the recent attacks.
I noted, in my earlier review of The Dark Vale, that most pre-published adventures are railroady. While I have resigned myself to that fact, and it may therefore be a tad unfair to criticize this adventure for that common malady, I found this adventure to be annoyingly railroady. I certainly like the idea of the adventure. Several of the encounters have a very authentic feel. However, many of the encounters in Wolves on the Rhine feature events where the players have no control over the outcome, regardless of their actions, and where the npcs serve only as sources of information to spur the players on to the next pre-determined encounter.
As a convenient Roman name, term, and armament reference, or as a skeleton upon which to build your own imperial adventure, Wolves on the Rhine will ably serve. Running the adventure, as is, will be acceptable with those Players that enjoy being along for the ride, or are more interested in the combat, and see 'story' as merely the bits that link those combats together.
I still intend to purchase more DCG pre-programmed adventures. But I trust that the other adventures will be more like The Dark Vale.
Posted by Aaron E. Steele at 9:06 PM

Yup this is the one I authored, and I agree with your statements. It is very much on the rails which is the nature of this type of product. Since it only includes the basic combat module from LOA, its more akin to a straight up Melee adventure then a true TFT sort of experience. Originally I had wanted to write a refereed adventure for the LOA system, but DCG wanted to keep to their standard of pre-programmed fun. As a result, it is not as strong as it could have been.

Agreed. I had the same complaint of The Dark Vale. What I like about the new DCG micro-adventures (including yours) is that they have a much richer background than the original metagaming ones ever had.

A beginning DM can use these DCG adentures, but a more seasoned DM will also get value from them.

I'll have to check these out. Thanks!