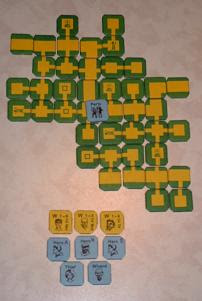 There are no town adventuring rules. There are no lists of dungeoneering equipment to purchase. In fact, there are no rules, other than the ones that govern your activities within the Deathmaze.

Your goal: explore the Deathmaze, kill or parlay with the monsters, gather 75 experience and 100 gold pieces each, and exit the Deathmaze with at least three of your original party members still alive. If you do that, you win the game.

Deathmaze is not an RPG, at least in the sense that most of us view RPG's. You can certainly imbue your character with personality, if you like. But the game neither requires it, nor is there any mechanism to reward you for doing so.

A plethora of old-school random generation tables govern what monsters and dungeon features you encounter, how much treasure is discovered, and how the monsters react to you. There are a limited number dungeon features, principally corridors, rooms, statues, fountains, traps and trap doors. Playing the game does not require a game-master, although it speeds up play if there is one, or if one of the players also acts as the game-master.

Combat is also based on a table, with each player rolling a d6, adding any bonuses for special abilities or magic weapon bonuses, and consulting a combat table to determine the resulting wounds inflicted.

There is little in the way of strategic combat. You typically have a front-rank of three Heroes, backed up by Thieves and Wizards. The monsters are arrayed against you, up to three abreast, with additional monsters in a second and third row, ready to fill the ranks as the monsters in the front row fall. The only strategic decision for the players is to replace one of your heavily wounded characters with a healthy character from the second row.

Deathmaze is not a game for those that want an immersive role-playing experience. I can't imagine that this game was designed for that kind of play. It was designed as an old-fashioned dungeon crawl, an amusing diversion when you only have an hour to "get a game in", which is specifically what microgames were designed for.

The Deathmaze rules anticipated that you may want to play the same characters, multiple times. We did just that, all those years ago, and had loads of fun.
Posted by Aaron E. Steele at 7:19 PM

I missed out on this whole Microgames thing. Thanks for posting about these, I might check out ebay and see if I can pick some of this stuff up.

This is a great series...really great. I wish I could remember the names of the micro-games we played. The only one that comes to mind is Chitin(?).

These look like great fun! I've been looking for a rpg/boardgame hybrid for some of my nascent players. Something like this would be a good fit perhaps.

@James: good hunting. Depending on what kind of gaming you like, you may be able to find a microgame collection on the cheap.

@Rusty: Chitin was a lot of fun. The other game that was not bad was Sticks and Stones, which is a stone-age combat game.

@Jay: Deathmaze is a good game, if a little finicky, with all the little bits that come with it. And the character chits are limited. It's a good game for 3 or 4 people, after that, it just gets too difficult, with such a little playing board.