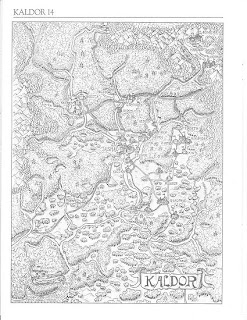 As I had some rather uncomplimentary things to say of Harn here, I thought it would only be fair to post a little of what I do like about the Harn system.

First, I no longer own the Harn system (burned, lost or tossed), but I do own a couple of Harn supplementary items, so I make these comments mostly from memory, but I recall being impressed with the level of detail that went into the rules. At the time, I liked the Harn skills and combat systems.

What I do like about Harn though is the world-building material, the town, castle and city maps, and other supplementary material. If you are happy to jettison most of the flavour and background of the Harn materials, you will likely get value from these products.

Case in point is the wonderful little map (above), which is a player's map of the Kingdom of Kaldor. Hand-drawn, showing the major roads, rivers, towns, mountains and other terrain features, it is the perfect handout to provide players who purchase a kingdom map from a cartographer. This map appears in Encyclopedia Harnica 8, EH being a periodical published by Columbia Games during the 1980's.

The EH series was a fantastic little resource. EH 8 contained maps of different areas of Kaldor, geneology of the current ruling family of Kaldor, relationships between the various Earls, the Royal household, the Coats of Arms of the various Earls (in full color), and a section on Astrology. The background itself? Jettison. But the templates, the coats of arms, the concept of constellations and superstitions you can add to your campaign. Invaluable.

I understand that much of the materials that appeared in the Encyclopedia Harnica series eventually found its way into newer Harn publications. For example, Trobridge Inn, which appeared in Encyclopedia Harnica 4, was reprinted as its own adventure. I purchased the adventure, and would happily use the Inn setting as an outpost from which the players might foray to a dungeon, something like the Keep in B2. But I don't think i'd use the Trobridge Inn adventure itself, as the background is too "particular" to Harn to fit into any world I would like to adventure in.
Posted by Aaron E. Steele at 1:59 PM

Wow, that is one gorgeous map! I've heard of Harn, but never looked into it. Apparently I didn't saved some cash.

Harn was a labour of love by N. Robin Crosby. I'm sure there are those who swear by that system and environ, but I am not one of them. Still, I can appreciate it for what it is, and at least it is not a disaster like Synnibarr.

If you can get Castles of Harn, Cities of Harn, Son of Cities, and the other "map" resources inexpensively, they are definitely worth it.