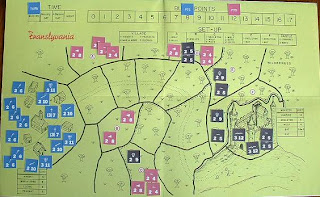 Transylvania simulates the conflict between a vampire, holed up in his Transylvanian castle, and the terrorized village below. The background to the game is that the villagers have gathered enough courage, and a sufficently large force, to confront the Vampire, and have decided they must either defeat the Vampire or die in the attempt. The villagers have knights, men-at-arms, clerics and angry peasants at their disposal (the blue units). Arrayed against them is the Vampire and his minions: skeletons, wolves, bats and rats (the red and black units).

My children and I took the opportunity to play this game the day prior to Halloween. They played the Vampire and his minions while I played the villagers. My clock was cleaned each time we played.

Transylvania was a lot of fun to play, despite (or perhaps because of?) my repeated losses. The rules fit on two pages, so this game is easy to learn and teach -- in my mind, a requirement for any successful microgame. Each game took about 15 minutes, although the games would have been longer, had I done a better job of balancing my forces between the defence of the village and the attack on the castle.

The children had great fun beating their dad. We'll be retrieving this game from storage again next Halloween.
Posted by Aaron E. Steele at 3:17 PM

Funny, I just won the Steve Jackson Undead minigame on eBay recently and had been thinking of Transylvania too... Slowly rebuilding my old collection. :-)

Incidentally, several of the dwarfstar games are available as free downloads.